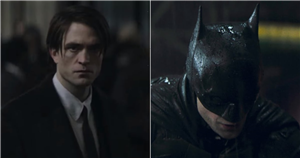 Are you ready to meet your new Dark Knight? On Aug. 22, DC released a first look at The Batman starring Robert Pattinson as the titular character and Zoë Kravitz as Catwoman. This glimpse comes after producer Walter Hamada confirmed that the film will not take place in the same time period as Zack Synder’s Justice League, in which Ben Affleck wears the black cape alongside Jason Momoa’s Aquaman, Gal Gadot’s Wonder Woman, and Henry Cavill’s Superman.

The teaser trailer shows Pattinson suited up to take on corruption and crime in Gotham City, and on Oct. 14, the film’s official Twitter account revealed that a new trailer is dropping on Oct. 16. We still have plenty of questions left unanswered, but we’re eager to see what else unfolds before the movie debuts on March 4, 2022 (production was halted due to COVID-19 for two weeks in September 2020). Watch the first look above, then check out the rest of the cast of The Batman.