Many of us watch television in batches now, inhaling seasons and whole series in snack-fueled sessions where individual episodes run together, differentiated by just a few impatient clicks of the remote. But the people who make those series still build them episode by episode, constructing individual half-hours and hours that can knock you out.

There may be no one at the office the next day who’s watching the same show you are, so consider this collection of memorable episodes from 2018, presented alphabetically by series, your virtual watercooler. MIKE HALE

Fame, in “Atlanta,” has been a fantasy, a disappointment, an elusive taunt. This time, it’s a gothic horror story. The eccentric title character (Donald Glover, encased in ghoulish prosthetics) haunts a mansion that serves as a shrine and a prison for his brother, a once-renowned musician. It’s also a museum, honoring Teddy’s father — represented in the form of a faceless mannequin — who tormented his sons toward greatness (like the fathers of Michael Jackson and Marvin Gaye, both mentioned in the episode). It’s a poignant, creepy showcase for the deadpan Lakeith Stanfield and for Glover, who depicted entertainment culture as a mask for nightmares in “This Is America,” and here plays a monster made out of dreams. (Watch on FX Plus.) JAMES PONIEWOZIK

Read more about the second season of “Atlanta.”

Equal parts tragic and tense, the series finale for “The Americans” pulled off the nearly impossible: A conclusion that felt startling but appropriate. Complete. We knew there would have to be some kind of reckoning between the Jenningses and Stan, but it could have been violent or unhinged or less truthful. What we got was a standoff in a parking garage, with Stan pointing his gun at Philip, Elizabeth and Paige, his surrogate family, his best friends. I thought he might shoot them, and then I thought he might shoot himself. But enough people have died on “The Americans” for the characters to know that death isn’t always a punishment, and it certainly isn’t the harshest one. The rending of one’s identity — not being able to be who you were before, to know who you knew, to love who you loved, to trust your own thoughts, to have a cohesive and continuing story of yourself — creates a permanent wound. It’s one Philip and Elizabeth grappled with for the entire series, and one they inflicted on their children and on Stan. (Watch on FX Plus.) MARGARET LYONS

[Read more about the series finale of “The Americans.”] 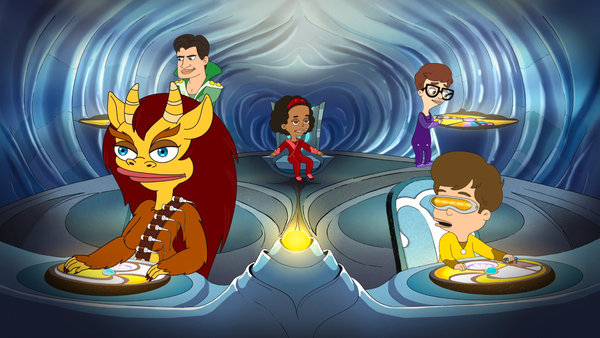 The raunchy animated puberty-com has always been more sweet and insightful than its hormone-drenched premise might lead you to believe. Here, it became a downright public service. When well-meaning ignoramus Coach Steve (Nick Kroll) is assigned to teach sex-ed, his students end up taking over the lesson with sketches, fantasy sequences and parodies. (These include a “Bachelor”-style reality show in which a condom, an I.U.D. and other options compete with “the pullout method” to become a teenager’s contraception method of choice.) The story of terminating an unplanned pregnancy — scored entirely to, and reprising the video of, “Groove Is in the Heart” by Deee-Lite — made for a couple of the most ingenious, and oddly heartwarming, minutes of TV this year. (Watch on Netflix.) JAMES PONIEWOZIK

The ever-optimistic Tina meets the latest love of her life (“I’m not boy-crazy, I’m boy-focused”), and in order to see him again she has to disguise herself and sneak into auditions for a struggling boy band. Of course. “Bob’s Burgers” is a model of consistency in its writing and delineation of its characters, a family of lovable misfits who run a diner you probably wouldn’t want to eat at, and any number of episodes could have made this list. The Season 9 premiere gets the nod for its closing musical number, in which Tina rides a unicorn while musing on “the right number of boys” in a girl’s life. (Watch on Fox.com and Hulu.) MIKE HALE

This is the best episode of anything I saw in 2018. It’s a distillation of everything “BoJack Horseman” does right: A genius articulation of misery that’s never more than a few seconds from a 10/10 joke, and an experiment in form and structure. “Free Churro” is a 25-minute monologue, with BoJack eulogizing his awful mother, whom he hated and who hated him right back. He acknowledges their mutual bitterness, his father’s grave shortcomings and cruelty, his frustrations. The speech is full of haunting and hilarious and memorable lines, but most telling is BoJack’s digression about his ’90s sitcom, “Horsin’ Around,” a vintage schlockola show in the vein of “Full House” or “Family Matters.”

“You can’t have happy endings in sitcoms, not really, because, if everyone’s happy, the show would be over, and above all else, the show has to keep going,” BoJack says. That’s what he really thinks, but it’s completely wrong — all you have are happy endings on those shows, everything always works out. People hug, people forgive. Happy family homeostasis. Thanks to his terrible parents and their terrible parents and whoever else, BoJack doesn’t see things that way; if all life is sadness, then at least sadness is life. “You can never get a happy ending, cause there’s always more show,” he says. Maybe that’s only true for BoJack. And “BoJack.” (Watch on Netflix.) MARGARET LYONS

[Read a conversation with the creator of “BoJack Horseman” about Season 5.]

The Swedish actress Sofia Helin gave an uncompromising performance as a damaged, obsessional detective across the four seasons of this Danish-Swedish twist on the buddy-cop series. She also burned her character’s habitual cellphone salutation — “Saga Norén, Länskrim Malmö,” identifying herself as a member of the Malmo criminal investigation division — into the brains of TV viewers in 160 countries. The series finale, written by the show’s creator, Hans Rosenfeldt, put the perfect cap on her portrayal, in a moment that was simple, predictable and utterly moving. (Watch on Hulu.) MIKE HALE

This puzzle-series pastiche of Stephen King had its finest hour with its study of Ruth Deaver (Sissy Spacek), a woman lost in the corridors of dementia. While many TV episodes these days play with four-dimensional narratives and unreliable perceptions, “The Queen” stayed heartbreakingly grounded in character by anchoring itself in Ruth’s point-of-view. As we drift from present to past, from sweetness to tragedy, we are tethered to reality, along with Ruth, by the markers she set for herself: the chess pieces (from a reproduction of the beautiful Lewis chessmen) that she’s scattered around her home like a bread crumb trail. Spacek is measured and devastating as she takes us on a tour of Ruth’s life, pausing every once in a while to light on one of the game pieces and their quiet message: “I was here.” (Watch on Hulu.) JAMES PONIEWOZIK

TV shows about TV shows often give you only a taste of what their fictional creations are like. (Think of the tiny glimpses of “TGS” on “30 Rock.”) But this full-length faux episode of the basic-cable women’s wrestling series, shot in ready-for-VHS standard definition (with a 1980s soundtrack and graphics to match), delivered wonderfully. “The Good Twin” — the title comes from a soap-operatic twist that gives Alison Brie’s Soviet wrestling heel character a twin sister — was an entertaining novelty on its own. But befitting the show’s fixation on role-playing as liberation, the faux-“GLOW” also advances the story line by showing how each character has poured herself into her wrestling alter ego. (Watch on Netflix.) JAMES PONIEWOZIK

[Read more about the second season of “GLOW.”]

“Jane the Virgin” pulled off the twist of the year in its season finale, an episode that openly announced its theme as surprise! — and yet still totally surprised me. There was so much to adore in this episode, too: Alba’s citizenship ceremony and impromptu wedding; Alba, Rogelio and Xiomara getting all misty when Rafael asks for their blessing before he and Jane get engaged; the perfectly clever cliffhanger hashtag #JRShotWho, after JR shot an unseen assailant. How foolish I was to think that was the big shocker for the episode. No, instead, in the final moment, when I was all whipped up into an “is Rafael going to propose to Jane, or is Jane going to propose to Rafael” frenzy, there was back-from-the-dead Michael. (Or so it seems. You never can tell on a telenovela.) I’m Team Rafael forever, but even I screamed. On another show it might have felt like a cheap move. But “Jane the Virgin” is among the most emotionally literate series of all time, and I trust it to be a careful steward of my weak, fallible heart. (Watch on CW.com and Netflix.) MARGARET LYONS

Frank Langella, formerly the secret weapon of “The Americans,” segued seamlessly into the same role on “Kidding,” where he plays the seemingly button-down, business-minded manager-father of the children’s TV star, Mr. Pickles, played by Jim Carrey. The first season’s seventh episode, named after a Japanese process for repairing broken pottery, typified the show’s narrative quirkiness: a scene on the set of the Japanese “Mr. Pickles,” a Christmas toy store riot, an office-destroying meltdown. At its heart was a family Thanksgiving that went terribly wrong, and that in two brief moments — a dirty anecdote and a shouted expletive — was totally stolen by Langella. (Watch on Sho.com.) MIKE HALE

I’m cheating, since these aren’t episodes but rather stand-up specials, but they’re two of my favorite things I saw this year. “Nanette” is Hannah Gadsby’s searing piece that deconstructs stand-up, rejects the patriarchy and reclaims personal trauma narratives — but, like, funny sometimes. “Kid Gorgeous” is John Mulaney’s exquisitely polished act that includes the instant-classic segment comparing Donald Trump’s presidency to a horse being trapped in a hospital. (Watch on Netflix.) MARGARET LYONS

“Schitt’s Creek” is a show in balance, one where nuttiness is grounded by thoughtfulness, where chronic insults are soothed by consistent support. Never was this more sweetly depicted than in “Open Mic,” where David’s doting and lovable boyfriend Patrick suggests they throw an open mic night at David’s store, to drum up some additional buzz and business. David squirms and demurs. “Worst case scenario, we get some people in the store!” Patrick says. “No, worst case scenario, I watch improv,” David replies. In the end, the plan works, the store is packed and Patrick serenades David with a truly lovely acoustic cover of “Simply the Best.” It was one of the most romantic, adorable moments on TV this year. Awww. (Watch on Netflix.) MARGARET LYONS

‘The Lost Art of Forehead Sweat’

While the revival seasons of “The X-Files” were, broadly, not great, “The Lost Art of Forehead Sweat” is one of the best episodes the series ever aired. Of course it’s written by Darin Morgan, who wrote many of the original run’s best episodes, too. There’s a cheeky mischievousness to Morgan’s episodes, and here that manifests as a looping narrative and an unreliable yet compelling whistle blower known as Reggie Something. Mulder and Scully learn about the Mandela Effect — a collective misremembering named for the weirdly common false memory that Nelson Mandela died in the ’90s — and are faced with the fallibility of their memories, something the show addresses with both humor and genuine depth. This episode is what happens when “the truth is out there” and “trust no one” bump up against bogus cries of “fake news” and maybe aliens. (Watch on Fox.com and Hulu.) MARGARET LYONS