A harrowing new staging of Berg’s “Wozzeck.” The return of the bass-baritone Bryn Terfel, after eight years, in Wagner’s “Der Fliegende Holländer.” And the company’s first regular Sunday matinees.

Those are among the highlights of the Metropolitan Opera’s 2019-20 season, announced on Wednesday.

There will be five new productions, including the “Wozzeck,” which will be conducted by Yannick Nézet-Séguin in his second season as Met music director, and the “Fliegende Holländer,” directed by François Girard. 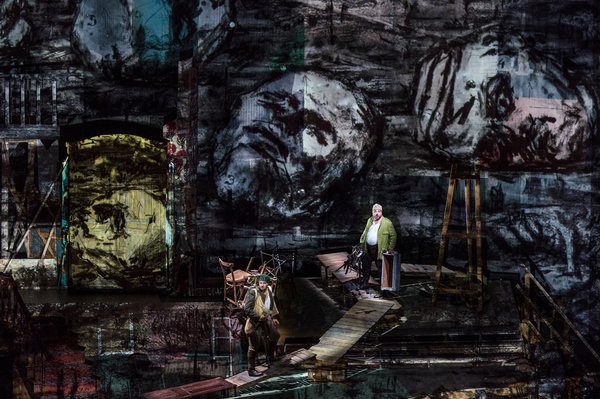 The other new productions? Something old (Handel’s 1709 “Agrippina,” coming to the Met for the first time) and something new (Philip Glass’s 1984 “Akhnaten,” also new to the company). Something borrowed (Phelim McDermott’s “Akhnaten” staging first appeared in London and Los Angeles) and something, well, blue: the Gershwins’s “Porgy and Bess,” starring Eric Owens and Angel Blue, will open the season on Sept. 23.

New Year’s Eve, in recent years the occasion for a new production of a full work, will bring a Puccini gala — an act each from three operas — featuring Anna Netrebko. She’s not the only diva on offer: Joyce DiDonato stars in “Agrippina,” Sonya Yoncheva in Puccini’s “Manon Lescaut,” Jamie Barton in Gluck’s “Orfeo ed Euridice” and Diana Damrau in Donizetti’s “Maria Stuarda.”

There are 25 productions total, and you probably can’t see them all. So what to choose? Our critics and writers zero in on the highlights.

Though Gershwin called his music-theater classic a “folk opera,” I find it more and more simply a great opera, period. James Robinson’s staging has a superb cast and David Robertson conducting. When I saw this production at the English National Opera in London, technical glitches forced makeshift changes to some scenes. I can’t wait to see it properly. ANTHONY TOMMASINI

When Anna Netrebko first took on Verdi’s murderously ambitious Lady Macbeth a few years ago, critics declared it one of her greatest roles. Her vocal power is a given, but Ms. Netrebko also reveals the instability simmering beneath the power hunger. With the irrepressible Plácido Domingo in the title role (relieved, in some performances, by Zeljko Lucic) and Marco Armiliato conducting, this revival, opening on Sept. 25, promises to be one of the season’s early hits. CORINNA da FONSECA-WOLLHEIM

This Orientalist potboiler may be known chiefly for the sweeping tenor aria “Nessun dorma,” but this season its leading ladies are the draws. With Christine Goerke (in an October run) and Nina Stemme (in April) sharing the title role, it’s a tag team of turbocharged dramatic sopranos. Mr. Nézét-Séguin, Mr. Armiliato and Carlo Rizzi take the podium. CORINNA da FONSECA-WOLLHEIM

The Met has come slowly to the works of Mr. Glass, but Mr. McDermott’s imaginative, mesmerizing staging of “Satyagraha,” in 2008, was one of the company’s recent landmarks. This director returns on Nov. 8 with an “Akhnaten” of thrift store glamour, starring the countertenor Anthony Roth Costanzo and conducted, in her Met debut, by Karen Kamensek. JOSHUA BARONE

‘The Queen of Spades’

The Norwegian soprano Lise Davidsen, 32, burst onto the scene a couple of years ago with commanding performances as Strauss’s Ariadne. The Met, historically sometimes slow to grab rising European stars, should be commended for engaging her so quickly, for a revival of Tchaikovsky’s surreal, stirring opera opening Nov. 29 — conducted, in another company debut, by Vasily Petrenko. ZACHARY WOOLFE

Updated to the eve of World War I and deftly toggling between wit and heartbreak, this Robert Carsen production was a revelation for me when it was new in 2017. Now I’m eager to hear the score in the hands of Simon Rattle, returning to the Met on Dec. 13 after a riveting “Tristan und Isolde” in 2016. His cast includes Camilla Nylund as the Marschallin, Magdalena Kozena as Octavian, Golda Schultz as Sophie and Günther Groissböck reprising his scene-stealing turn as Baron Ochs. MICHAEL COOPER

When I saw it at the Salzburg Festival in 2017, William Kentridge’s Berg staging struck me as his finest opera production yet. It has his antic visual trademarks — jittery action and flickering projections reminiscent of the grotesque battlefield prints of Otto Dix and George Grosz — but was notably humane and emotionally true. Elza van den Heever and Peter Mattei star at the Met beginning Dec. 27; for the first time since the 1980s, the gorgeously influential score will be conducted by someone besides James Levine. ZACHARY WOOLFE

Opening Jan. 25, Robert Lepage’s staging of this singular take on the Faust legend — not quite oratorio, not quite opera — is a little busy and reliant on multimedia effects for narrative drive. But the draw here is Berlioz’s magnificent score, by turns heavenly and hellish, as well as performances by Bryan Hymel in the title role (though recent cancellations make his appearance a question mark) and the gifted comic Ildar Abdrazakov as Méphistophélès. JOSHUA BARONE

A welcome commitment from the Met to a Baroque repertoire that it can serve better. David McVicar’s well-traveled production dates back to Brussels in 2000, but it is also one of this house standby’s more interventionist stagings, and should be particularly vivid opening Feb. 6 with a cast built around Ms. DiDonato singing the title role, alongside Kate Lindsey as Nerone, Iestyn Davies as Ottone, Brenda Rae as Poppea and Matthew Rose as Claudio. Harry Bicket, experienced in Handel, conducts. DAVID ALLEN

Mr. Girard’s post-apocalyptic production of Wagner’s “Parsifal” for the Met was bleakly somber, mysterious and haunting. It will be fascinating to see his take on this earlier work, with Mr. Terfel in the title role, Anja Kampe as Senta and the always exciting (if always unpredictable) Valery Gergiev conducting, starting March 2. ANTHONY TOMMASINI

Janacek’s earthy, poignant, sophisticated but accessible operas have been Met highlights almost whenever they’ve appeared. The season ends in May with just three performances, the first in 15 years, of Jonathan Miller’s production of this rending work, starring Susanna Phillips in the title role, and, in his Met debut, Pavel Cernoch. Lothar Koenigs, acute at the Met leading “Lulu,” conducts. SETH COLTER WALLS