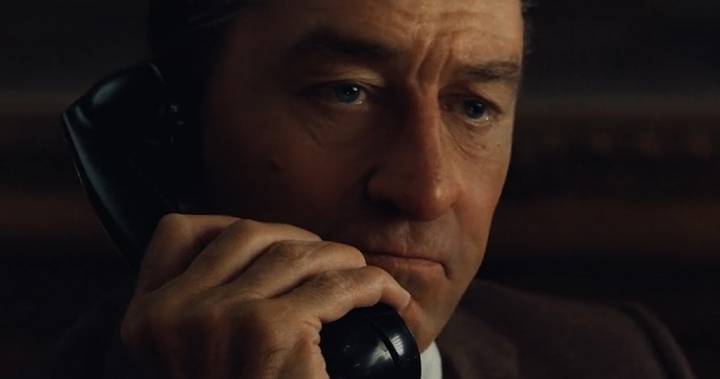 Fans of Martin Scorsese were treated to a first look at his highly anticipated Netflix film, The Irishman, with its first official trailer on Wednesday.

The biographical organized crime film is based on the Charles Brandt novel, I Heard You Paint Houses, which recounts the life and crimes of the late Frank (The Irishman) Sheeran, an American labour union official who allegedly worked for the Bufalino crime family incognito.

The Irishman stars Robert De Niro as Sheeran and Joe Pesci as his boss, Russell (Old Man) Bufalino. Both have worked together with Scorsese, 76, on a number of different projects, including Raging Bull (1980) and, most recently, 1995’s Casino.

Robert De Niro in Martin Scorsese’s upcoming Netflix film, ‘The Irishman,’ which is set for a Sept. 27 premiere at the New York Film Festival.

Al Pacino rounds out the trio — in his first collaboration with Scorsese — as Jimmy Hoffa, who was supposedly a good friend of The Irishman.

Prior to his death in 2003, Sheeran claimed he murdered Hoffa as per Bufalino’s orders in 1975 — when he was reported missing — during an interview ahead of the publication of I Heard You Paint Houses.

The trailer opens with Pesci’s character walking into the Villa Di Roma restaurant. A phone rings and he picks it up.

“I’m gonna put him on the phone and let you talk to him, OK?” he adds before passing the phone to a younger-looking De Niro.

Pacino is then revealed on the other line as Hoffa. “Is that Frank?” he asks. “This is Jimmy Hoffa.”

Robert De Niro in Martin Scorsese’s upcoming Netflix film, ‘The Irishman,’ which is set for a Sept. 27 premiere at the New York Film Festival.

“Our friend speaks very highly of you,” he adds, referring to Bufalino.

“I heard you paint houses,” says Hoffa, before cutting to the sound of breaking glass, a man falling out of the front door of the restaurant and Sheeran proceeding to shoot and kill him.

“Yes, I do, sir,” Sheeran says, as the film cuts back to the phone.

Joe Pesci in Martin Scorsese’s upcoming Netflix film, ‘The Irishman,’ which is set for a Sept. 27 release.

The Irishman is set to premiere at this year’s annual New York Film Festival on Sept. 27. It will be released on Netflix worldwide later this year, before making its way to select theatres.

An official release date has not yet been confirmed.