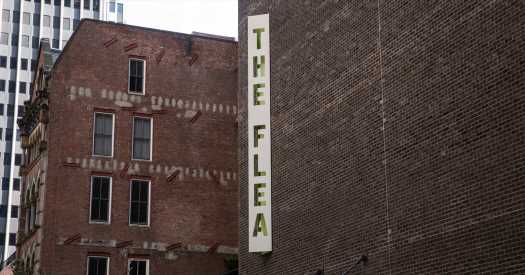 The Flea, a notable Off Off Broadway company that discontinued its most prominent programs for emerging artists in December, effectively eliminating dozens of positions and provoking the ire of resident artists, announced a new model for its future and a new show. That model, unveiled on Thursday, focuses on supporting the work of underrepresented artists via self-contained, self-programming resident companies.

“I’m really excited about it,” said Niegel Smith, the Flea’s artistic director since 2015 and one of the few Black artistic directors at a prominent New York theater. “The artists have total autonomy in making their work, and we’re making a long-term investment in a group of artists we care deeply about.”

The first resident company will be the newly formed Fled Collective, composed of many of the members of the Flea’s former nonunion acting company, the Bats. It will have a three-year residency that comes with an unrestricted $10,000 cash grant and $50,000 in space rental credits each year, as well as production and marketing support and resources to develop new work. The company will have complete control over its artistic output and will focus on the work of artists of color and queer people.

“Almost all the things we asked for, the Flea added into this partnership,” Dolores Pereira, a leader of the Fled Collective and a former member of the Bats, said in an interview. “It’s been a very collaborative process.”

The theater will also begin a multiyear residency program for itinerant artistic companies. The first participant will be Emerge 125, a Black woman-led modern dance troupe that will receive creative, technical and producing support, discounted rental space, and access to office space for at least three years. The theater hopes to eventually support multiple companies in the program each year, Smith said.

Pereira said the Fled Collective aims to be able to pay all its artists and plans to rely on the annual $10,000 cash grant and additional fund-raising to do so. The company has no cap on members and currently has at least 50, she said.

The theater also restructured its board, with at least one seat now allotted to an artist from a resident company (board members remain volunteers, Smith said). He said the Flea, which has three paid staff members, aims to raise at least $850,000 to support programming and operations in the coming year.

Since 2017, the Flea has operated out of a new, three-theater building in TriBeCa whose largest performing space holds about 100 seats. In the last few years, it has staged plays focusing on police brutality, gun violence and other timely issues: “The Fre,” a play by Taylor Mac that is partly a queer love story, was in previews when the pandemic forced it to close.

The Flea also faced pushback for its reliance on unpaid artists, which boiled over in June 2020 when a number of the unpaid workers wrote a letter accusing the theater of “racism, sexism, gaslighting, disrespect and abuse.” The Flea then committed to begin paying all of its artists. But in December, it dissolved its programs for emerging artists, citing the financial effects of the pandemic.

Through months of having meetings almost weekly, then holding a healing circle, and with the help of a Black woman-led consulting group, CJAM Consulting, the Flea and its artists set out repairing their relationships, Smith said. The theater’s staff also completed anti-oppression and antiracism training.

“There definitely was a lot of hurt,” Pereira said. “But now it feels like a new relationship.”

The first show of the new season (which is being produced by the Flea, not a resident company) will be “Arden: A Ritual for Love and Liberation,” slated for early 2022. That work was conceived by five artists including Carrie Mae Weems and Diana Oh and draws inspiration from the Forest of Arden from “As You Like It” — reimagined as a place where “queers, feminists and intellectuals dare to create the world that centers their desires.” It will be followed in June by four Juneteenth public art commissions that meld artists’ reflections on the holiday with work that honors Black culture. Additional productions will be announced at a later date, the theater said.

Pereira hopes the Flea’s new structure of rebuilding itself as an incubator for underrepresented artists can serve as a model for other companies.

“The harm done at the Flea is not unique to the Flea, but showcased throughout the theater community,” she said. “We hope any artist can follow this model to reclaim their power.”