We tend to think about Wagner’s “Ring” as an epic saga of bitter rivalries, fearless heroes and flying horses. But at the core of “Die Walküre,” the second of the four “Ring” operas, is something far more intimate: one of the most profound depictions of a father-daughter relationship in all the arts.

The complex feelings between the brooding god Wotan and his favorite daughter, the feisty Valkyrie warrior Brünnhilde, come to a head during an intimate scene in Act II, when, in a rare moment of vulnerability, Wotan confesses what a mess he’s made of things.

[Read about the triumph of Christine Goerke, the Met’s Brünnhilde.]

The director Robert Lepage bungles this poignant scene in his production for the Metropolitan Opera, which returns on Monday. His staging makes me realize what I still miss about Otto Schenk’s production, which the Met retired 10 years ago. Schenk’s traditional approach, which presents the “Ring” as a storybook tale of gods, giants and dwarfs, had its limitations. But he was keenly sensitive to the relationships between Wagner’s characters, and his staging of this confessional moment is a high point.

Long known as Wotan’s Narrative, this scene can seem like a dead spot: nearly 20 minutes of talk, talk, talk. In fact, it’s the heart of the entire cycle.

As Wotan tells Brünnhilde the whole sorry story of how he came to this crisis point, the music unfolds slowly, quietly, almost statically. Many of Wotan’s halting vocal lines should sound like he’s almost muttering.

In the Schenk “Walküre” — available on DVD and the Met Opera On Demand, conducted by James Levine and starring James Morris as Wotan and Hildegard Behrens as Brünnhilde — Wotan seems at first to be speaking to himself. Brünnhilde, who has never seen her father like this, warily approaches to ask what’s wrong. This anguished Wotan hesitates. If he voices his thoughts out loud, he says, will he lose grip on his own will? Brünnhilde tenderly replies that when he talks to her, he is “speaking to his will.”

So he opens up, admitting to his greed for power; to violating the treaties he had pledged to uphold; to confiscating a magic ring from the Nibelung dwarf Alberich. 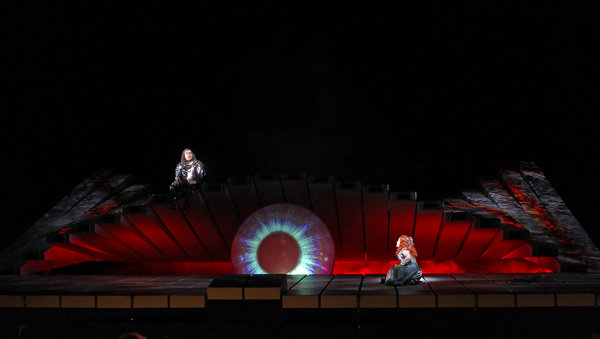 Schenk’s staging could not be simpler: Wotan just sits on a rock, Brünnhilde next to him, sometimes resting her head on his knee, looking at her father with unblinking attentiveness, seemingly gripped by every word.

It’s clear from the staging that what’s really transfixing Brünnhilde — more than the tangled story Wotan tells — is the fact that her father is opening up at all. Suddenly, this goddess seems like any devoted daughter of a powerful, emotionally walled-off father, finally confessing everything. And to her!

The narrative comes to a crucial turn when Wotan explains how his hunger for knowledge drove him to follow the earth goddess Erda to her realm — where, in time, he says, the world’s “wisest woman” gave birth “to you, Brünnhilde.” In Schenk’s staging, Mr. Morris’s Wotan melts with fatherly affection and cradles her face in his hands, as Behrens’s Brünnhilde, with radiant eyes and a wistful smile, basks in her father’s love.

How does Mr. Lepage present this scene?

It starts off promisingly. In the version also available on video, and also conducted by Mr. Levine, a visibly rattled Wotan (Bryn Terfel) frets that he is the least free of all men. Brünnhilde (Deborah Voigt) looks both concerned and scared.

But as the narrative begins, this Wotan walks up the raked planks of the production’s massive set and assumes a lordly stance, looking past Brünnhilde, who stands meekly below. So father and daughter are kept apart during what is supposed to be their moment of closest bonding.

Suddenly, a circle of light rises from the ground in front of Brünnhilde. The image morphs into a huge eye. Brünnhilde, now sitting on the ground, begins to watch what is, in effect, a greatest-hits animated video projection of the story Wotan relates. When he talks of the giants who built the castle Valhalla, we see circles of color to suggest its rainbow bridge. When he speaks of Erda, a ghostly image of her comes into view. And when Wotan says that Erda conceived a child, this Brünnhilde is shown what looks like a sonogram image of her embryonic self. Rather than basking in her father’s love, Ms. Voigt’s Brünnhilde, looking nervous and confused, turns her face away from him.

The overly obvious animated images are bad enough. What’s worse is that, by fixating with such preposterous exactitude on the details of Wotan’s story, Mr. Lepage distracts us from caring about what Wagner is really depicting: a proud but failing father who, with no one else he can trust, confides in his daughter.

With Schenk’s staging, a newcomer to “Die Walküre” watching this father-daughter moment from a balcony seat at the Met may well have found it ponderous: two singers, sitting on a rock, during a long stretch of very slow music. But consummate artists like Behrens and Mr. Morris, working with a skilled director, trusted, rightly, that this restraint and subtlety would lend emotional richness and honesty to the scene. And emotional richness is just what Mr. Lepage’s production too often lacks.