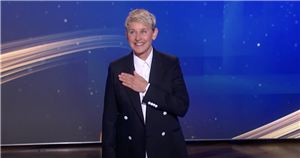 After 19 seasons on the air, “The Ellen DeGeneres Show” has officially come to an end. DeGeneres said farewell to her daytime talk show on May 26 as she signed off one last time in a tearful monologue. “I walked out here 19 years ago and I said, ‘This is the start of a relationship,'” she said. “Today is not the end of a relationship, it’s more of a little break . . .”

In her speech, DeGeneres looked back on all the milestones she’s accomplished with her show before she choked up on her words. “Because of this platform, we’ve been to change people’s lives, and this show has forever changed my life. It is the greatest experience I have ever had beyond my wildest imagination,” she concluded before asking DJ Stephen “tWitch” Boss for one last dance.

“The Ellen DeGeneres Show”‘s series finale comes almost two years after the show faced multiple allegations of having a racist and toxic work environment. DeGeneres addressed the allegations during the show’s season 18 premiere saying, “I learned that things happened here that never should have happened. I take that very seriously, and I want to say I am so sorry to the people who were affected.”

She then addressed the allegations about herself, which claimed that she is not who she appears to be on TV. “Being known as the be-kind lady is a tricky position to be in,” she said in reference to her famous slogan. “I am that person that you see on TV. I am also a lot of other things. Sometimes I get sad. I get mad. I get anxious. I get frustrated. I get impatient. And I am working on all of that. I am a work in progress.”

Last year on May 12, DeGeneres confirmed the news of her show ending to The Hollywood Reporter saying, “When you’re a creative person, you constantly need to be challenged – and as great as this show is, and as fun as it is, it’s just not a challenge anymore.” According to the publication, the decision to end the show has been “several years in the making.”

During the farewell season, DeGeneres’s staff has shared their goodbyes online and in interviews as well. On Monday, Boss told E! News that the main things he’s going to miss about the show are “the laughs” and “shining a light on people that might not have had a platform like normal people doing super extraordinary things.” On April 28, Kalen Allen, a longtime friend of DeGeneres and host of “OMKalen” on EllenTube, also bid the show farewell after its final taping, tweeting, “And that’s a wrap….”