DC’s fan-focused streaming platform, DC Universe, has achieved early success since it launched in September, and is leading DC’s other products in public sentiment.

Streaming is just one piece of DC. Comic books and movies are a major part of the company. Three years ago, DC rebooted its entire comics line under the “DC Rebirth” label, and its movies are experiencing a comeback with “Aquaman” and “Shazam!” after 201 7’s “Justice League” underperformed critically and financially.

READ MORE: DC Universe is off to a hot start with 3 original TV series that rival Netflix in quality, but it has a big challenge ahead

DC Universe is well ahead of DC’s comics and movies when it comes to online public sentiment, though, according to a social-media analysis by consumer-insights company Crimson Hexagon provided to Business Insider. The analysis covered public sentiment for DC’s products on Twitter, Tumblr, and Reddit over the last six years.

DC Universe (streaming) hasn’t hit a slump with fans in its first seven months of release, and positive public sentiment is at 75%, according to Crimson Hexagon. DC’s movies and comics are at 50% and 49% positive sentiment, respectively, across social media, as the chart below shows. 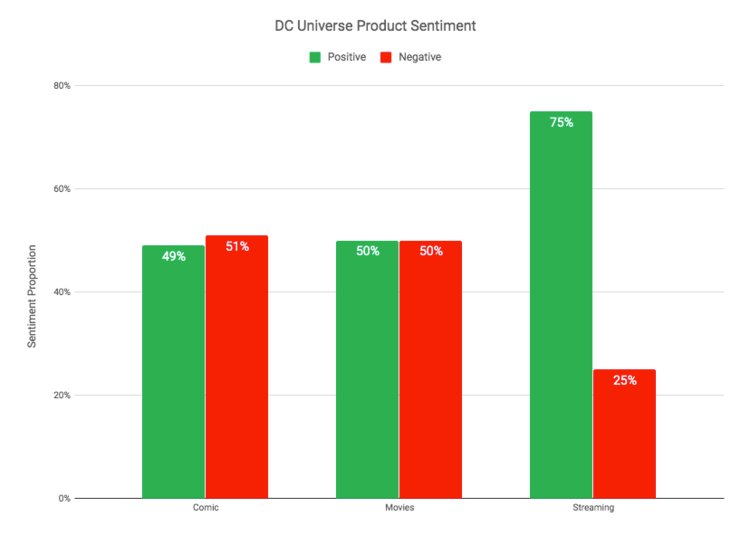 DC Universe’s first three original shows — “Titans,” “Young Justice: Outsiders,” and “Doom Patrol” — have been a hit with audiences, and it will be releasing more original content this year, including “Swamp Thing” in May. All three have regularly been among the most in-demand streaming shows based on weekly data provided to Business Insider by Parrot Analytics.

DC’s connected film universe, known as the DC Extended Universe (DCEU), hit a slump a few years back, and hurt sentiment towards DC as a whole. Crimson Hexagon said that DC’s films usually have a higher positive sentiment than negative, but were “seeing a downward trajectory” for a time.

The DCEU began in 2013 with the Superman reboot “Man of Steel,” but DC’s brand hit its lowest point in August 2016 when “Suicide Squad” was released with just 34% positive sentiment.

READ MORE: DC has 7 upcoming superhero movies with official release dates — here are all the details

For comparison, Marvel as a brand has been more consistent, its lowest point being 57% in positive sentiment in August 2017, according to Crimson Hexagon. That’s thanks largely to its Marvel Cinematic Universe movies, which have been box-office and critical successes for over a decade.

“Plagued by low rated films, lack of interest, and a struggling narrative, DC needed to revamp their image,” the Crimson Hexagon report said. “After the sentiment all-time low with ‘Suicide Squad,’ ‘Wonder Woman’ helped them revamp their films. Although ‘Justice League’ caused issues with their reputation slightly, ‘Aquaman’ and ‘Shazam!’ have both been well received, helping the brand course correct.”

Positive sentiment toward DC overall was at 66% as of April 1.

Since “Justice League,” DC and the studio behind the movies, Warner Bros., have rethought the superhero-movie strategy, focusing less on the connected universe and more on standalone stories. It’s worked so far. “Aquaman” made over $1 billion worldwide, and “Shazam!” is off to a good start at the box office ($260 million globally so far) and is a hit with critics (it has a 90% Rotten Tomatoes critic score).