Every month, Netflix Australia adds a new batch of movies and TV shows to its library. Here are our picks for June, broken down by release date.

The fifth season of the British science-fiction anthology “Black Mirror” arrived early last December, in the form of the experimental, interactive movie “Bandersnatch.” The series now gets back to normal — relatively speaking — with three new episodes, the details of which will remain shrouded in mystery until the date of the premiere. The cast-list this year includes Anthony Mackie, Damson Idris, Andrew Scott, Topher Grace and (in an episode about a glamorous pop star with a stressful private life) Miley Cyrus. Whatever these stories turn out to be, the show’s writers and directors will continue to challenge viewers to ponder how technology can warp their perceptions of the world.

Between 1993 and 2001, the UK’s Channel 4 produced three mini-series based on the first three books in Armistead Maupin’s nine-novel “Tales of the City” cycle, about the intertwining lives of a makeshift family of radicals and libertines in San Francisco. Netflix’s new mini-series continues those earlier TV adaptations, bringing back the actors Laura Linney as a formerly inexperienced Middle American who had her eyes opened when she first arrived in California, and Olympia Dukakis as a landlady who opens her home to outcasts. This sequel will draw on the later Maupin books, while also commenting on how the very concept of “the city” has changed in the 21st century. 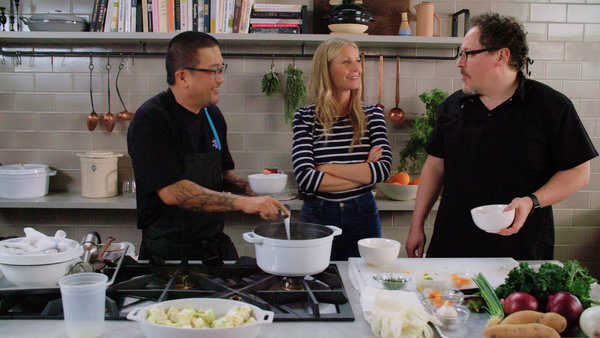 A spiritual sequel to the writer-director-actor Jon Favreau’s well-received 2014 dramedy “Chef,” the new docu-series “The Chef Show” has Favreau and the culinary celebrity Roy Choi (who consulted on the movie) cooking and chatting with some of their famous friends. They travel from Atlanta to Austin to Los Angeles, sharing food with Gwyneth Paltrow, Robert Downey Jr., Robert Rodriguez, David Chang, Bill Burr and more, in a show about how preparing and serving a meal can bring people together.

Netflix’s latest true-crime mini-series comes from Spain, and tackles a complex rape and murder case from 1992, when three teenagers were abducted while hitchhiking. Decades later, only one man has been charged for the crime, with another still on the run. But the clues suggest more perpetrators — and also don’t seem to match up with the police’s preferred suspects. The four-part documentary “The Alcàsser Murders” goes over what happened in explicit, gruesome detail, while also covering the controversies surrounding an investigation that many believed to have been bungled by the police, by the media, and by a hysterical public.

There is something highly compelling about the way the producers and crew of docu-series “Dope” bring a “tell it like it is” attitude toward their embeds with drug-dealers and narcotics agents. Footage is cut and narrated to make the material as pulpy and sensationalistic as possible. The intimate conversations with hard-cases and the surveillance-style angles on criminal activity have given “Dope” an irresistibly voyeuristic quality through two seasons, which should continue into the third.

While largely staying out of the public eye, the entertainment manager and promoter Clarence Avant has been a dominant force in American music, movies, sports and politics for over 50 years, making deals and offering advice to everyone from Snoop Dogg to Quincy Jones to Hank Aaron to Barack Obama. Director Reginald Hudlin’s documentary “The Black Godfather” features interviews with all four of those men, along with dozens of other past and present showbiz industry players, who discuss how Avant has worked behind the scenes not just to make people a lot of money, but to keep them focused on their deeper personal goals and values.

A guilty pleasure fantasy-romance about living the life of the mega-rich — as well as an incisive look at the culture clashes within the global Chinese community — “Crazy Rich Asians” became a box office hit last year in large part because it puts a spotlight on people and places who rarely get featured in mainstream American movies. Directed by Jon M. Chu and based on Kevin Kwan’s best-selling novel, the film stars Constance Wu as the middle-class university professor Rachel, and Henry Golding as her wealthy boyfriend Nick. The two travel to meet Nick’s wealthy relatives at a Singapore wedding, where Rachel finally comes to understand just how privileged Nick really is — and how much her every move is scrutinized by his controlling mother Eleanor (Michelle Yeoh).

Bob Dylan’s 1975-76 “Rolling Thunder Revue” tour was something of a summation, both of the singer-songwriter’s career to that point, and of America on the cusp of its bicentennial. Star-studded, theatrical, and packed with great music (much of it drawn from Dylan’s two mid-‘70s masterpieces “Blood on the Tracks” and “Desire”), all “Rolling Thunder” was missing was a fitting document of the event. Dylan’s own attempt to turn the experience into a movie, 1978’s “Renaldo & Clara,” disappeared quickly from circulation after critics trashed it for its self-indulgence. Now Martin Scorsese has taken a crack at getting an account of the tour right, reshaping the original footage and adding new material, looking to recreate the shaggy, wild vibe of the USA, circa 1975.

The animated “Spider-Man” movie “Into the Spider-Verse” wasn’t the only snappy, self-referential superhero cartoon released last year. The colorful and manic “Teen Titans Go! To the Movies” features all the rocket-paced action and jovially juvenile silliness that thrill fans of the TV series “Teen Titans Go!” The film follows the adolescent super-team (led by Batman’s sidekick Robin) as they work extra-hard to become the kind of beloved crimefighters worthy of making it to the big screen. Throughout, the writer-director-producer team of Aaron Horvath, Michael Jelenic, and Peter Rida Michail mock genre clichés and the pretensions of comic book super-heroics.

So far, the actor-producer Adam Sandler’s movies for Netflix have either been broad slapstick romps or more mature relationship comedies. “Murder Mystery” splits the difference, softening its physical schtick with the genuinely sweet rapport between Sandler (playing an earthy New York police detective) and Jennifer Aniston (playing his wife, a hairdresser who loves mystery novels). When the couple takes an overdue overseas vacation, they get framed for a billionaire’s death and have to rely on their wits and personal chemistry to get the better of some snooty Europeans.

Set in one of Chicago’s rougher neighborhoods, “Beats” stars Anthony Anderson as a high school security guard who gets involved in the life of a frequently truant student (played by Khalil Everage) after he hears the teen’s remarkable gift for making hip-hop backing tracks. Uzo Aduba plays the kid’s mother, who’s raised him to feel paralyzingly anxious about the dangers waiting outside their door. Directed by the accomplished music video and commercial director Chris Robinson, “Beats” is both a coming-of-age and an underdog story, scored to some catchy music.

An absolutely vital piece of documentary filmmaking, director Petra Costa’s “The Edge of Democracy” covers the recent political turmoil in Brazil, where a combination of corruption and betrayal pushed one administration out of office and cleared the way for a more authoritarian one. Costa — whose family has been heavily involved in the country’s politics and industry for generations — has a personal stake in the outcome of this situation. She uses her film to explain Brazil’s complicated history and to warn that even a seemingly stable, prosperous democracy can descend into chaos in an instant.

Before the writer-director Rian Johnson made “Star Wars: The Last Jedi,” he dabbled in science fiction with 2012’s “Looper,” a clever time-travel adventure with film noir trappings. Joseph Gordon-Levitt plays Joe, an unusual kind of hitman who kills people sent back to the past by the criminal underworld of the future. Bruce Willis plays “Old Joe,” a future version of Joe who escapes his own assassination and sets out to alter the timeline. Fast-paced and unpredictable, “Looper” isn’t really a special effects-driven techno-thriller; it’s more of a character study, with the exciting action scenes serving Johnson’s larger questions about the mistakes people keep making across generations, even after they know better.

It’s been 19 years since Samuel L. Jackson donned the long trench-coat of Harlem private investigator John Shaft II. The 2000 “Shaft” was always meant to be the beginning of a new film franchise, following directly from the 1970s version, which starred Richard Roundtree. So while this latest “Shaft” has the same title as the movies released in 1971 and 2000, it’s intended as a sequel, with Jackson and Roundtree now playing the older generation of Shafts, teaching the newcomer John Shaft Jr. (played by Jessie T. Usher) how to follow leads, crack skulls and stand up to the man. Directed by Tim Story and co-written by Kenya Barris and Alex Barnow — all better-known for their comedy movies and TV sitcoms — the 2019 “Shaft” appears to offer a more tongue-in-cheek approach to the series.

For over a decade, the actress/comedian Colleen Ballinger has entertained millions of fans via her YouTube channels and live tours, playing the character “Miranda Sings,” a fame-chasing vlogger with a grating voice and smeared makeup. The special “Miranda Sings Live… Your Welcome” (misspelling intentional) documents one of those concerts. It features Miranda’s typically twisted self-help tips and terrible show tunes, along with some furious pushback at her many “haters.” It’s also a distillation of nearly everything Ballinger has done over the years to parody a particular strain of online narcissism.