Every month, Netflix Australia adds a new batch of movies and TV shows to its library. Here are our picks for April, broken down by release date.

Along with “Astro Boy” and “Speed Racer,” the 1960s live-action superhero series “Ultraman” was one of the first Japanese TV programs to reach a mainstream audience worldwide. In its homeland, this tale of a gigantic armored alien and his symbiotic human companion has inspired sequels and spinoffs galore, including a current manga series that follows the adventures of the original hero’s son. That comic has been adapted to this new animated TV series, which blends traditional anime techniques with CGI.

Although it didn’t get anywhere near the buzz or ratings of season one’s “The People v. O.J. Simpson,” the “American Crime Story” second-season deep dive into the lives of Gianni Versace (played by Édgar Ramirez) and his murderer Andrew Cunanan (played by Darren Criss) is in a lot of ways even bolder and more inventive. The first episode begins with the serial killer gunning down the fashion designer, and then hour by hour “The Assassination of Gianni Versace” moves backward in the timeline, investigating how both these men were shaped by their family lives, by their egos and by the underground nature of gay culture in the late 20th century. 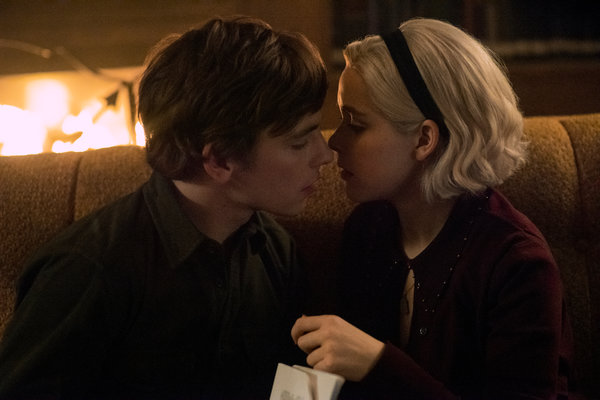 The special Christmas episode of “Chilling Adventures of Sabrina” that arrived in mid-December of 2018 offered a brief respite in the ongoing saga of the well-meaning teenage witch, Sabrina Spellman (played by Kiernan Shipka). But as part two of the series’ first season begins, the heroine finds herself back in a mess of her own making. She’s tapped into demonic powers to help her friends, and is now having trouble keeping her darker impulses in check. As with the season’s first half, expect story lines that evoke Harry Potter and “Buffy the Vampire Slayer,” with an eerily beautiful visual style that resembles “Rosemary’s Baby” and Hammer horror films.

Continuing the “choose your own adventure” experiment of last year’s much-talked-about “Black Mirror” special episode “Bandersnatch,” Netflix is now applying branching options to a Bear Grylls survival show. In “You vs. Wild,” the celebrity outdoorsman will once again brave extreme weather to have dangerous wildlife encounters. But in this new series, viewers will have opportunities throughout to choose the ways Grylls goes.

The horror-comedy series “Z Nation” developed a small but fervent fan following over the course of its five seasons, telling strange, sardonic stories about how society might adjust to a zombie apocalypse. The prequel spinoff “Black Summer” circles back to the beginning of the outbreak, following a mother (played by Jaime King) who’s trying to find her way to her daughter, dodging the undead while forging relationships with other survivors who’ve been left behind. The new show is being pitched as a more traditional thriller, replacing wry humor with white-knuckle chases and narrow escapes.

The Netflix series “Chef’s Table” sets a new standard for how TV shows about cooking could look and feel, bringing psychological depth and visual lyricism to the subject of food. Some of the “Chef’s Table” creative team will now take that same approach to the world’s street vendors in “Street Food,” a series focusing on the culture of entire cities and countries — including Singapore and India, in season one — rather than on the habits and obsessions of individual chefs.

‘She-Ra and the Princesses of Power’ Season 2

The rebooted version of the clunky ‘80s syndicated cartoon “She-Ra: Princess of Power” was one of 2018’s most pleasant TV surprises: a fusion of the original’s old-fashioned science-fiction/fantasy mythology with the cultural diversity, emotional richness and character-driven storytelling of more modern animated series. Even the name was changed, to reflect a premise that surrounds the title heroine with multiple magical warriors. Having introduced a teeming cast of complicated heroes and villains in season one, the series’ creator Noelle Stevenson and her staff of writers and illustrators will in year two be looking to put them into action in stories with more epic sweep.

Brie Larson is having a stellar 2019 so far, first starring in the international box-office smash “Captain Marvel,” and now seeing her 2017 directorial debut “Unicorn Store” finally get distribution via Netflix. Written by Samantha McIntyre, “Unicorn Store” stars Larson as Kit, an aimless, artsy young woman, who’s just about to settle for a dull-but-stable life in a corporate cubicle when she gets an offer from a mysterious stranger (played by Samuel L. Jackson), who says he can sell her a unicorn. The film’s quirkily colorful images are in service of a whimsical story, meant to raise questions about what it means — realistically — to “follow your dream.”

Can a movie that grossed over $400 million worldwide, and that nearly won the Oscar for Best Picture, be underrated? Now that the frenzy of the 2016 awards season has abated, it’s time to re-appreciate “La La Land,” the writer-director Damien Chazelle’s heartfelt and ambitious musical, about two aspiring Los Angeles artists — a jazz musician played by Ryan Gosling, and an actress played by Emma Stone — who help each other grow into the people they’re meant to be. Tuneful, stylish and masterfully acted, “La La Land” is a wonderful throwback to the best of classic Hollywood and the French New Wave.

After directing some of the best-loved comedies of the 21st century — including “Anchorman,” “Talladega Nights” and “Step Brothers” — Adam McKay tried something different with 2015’s “The Big Short,” an adaptation of Michael Lewis’ nonfiction book about the 2008 financial crisis. An all-star cast that includes Brad Pitt, Ryan Gosling, Steve Carell and an Oscar-nominated Christian Bale help McKay and his fellow screenwriter Charles Randolph tell a complicated story about the people who predicted the market crash, and who made a lot of money thanks to flaws in the system. This is a lively, frequently funny movie, with a point to make about how everyday folks are often lied to and betrayed by politicians and pundits.

It’s hard to avoid comparing the horror film “The Silence” with the recent blockbuster “A Quiet Place,” given that both are about close-knit families surviving on a ravaged Earth, avoiding monsters who hunt their prey by sound. But “The Silence” is actually based on a Tim Lebbon novel, which predates “A Quiet Place.” Stanley Tucci plays the heroic patriarch, while Kiernan Shipka plays his daughter, whose other senses have been heightened since she lost her hearing at 13. The veteran horror cinematographer and director John R. Leonetti directs, from a script by Dick Van Dyke’s grandchildren, Carey and Shane Van Dyke.

Netflix’s high school rom-com machine keeps rolling with “The Perfect Date,” which features a lead performance by Noah Centineo, who’s previously appeared in Netflix’s similar “To All the Boys I’ve Loved Before” and “Sierra Burgess Is a Loser.” Here he plays Brooks Rattigan, a broke student headed to college, who decides to make some extra money for school by renting himself out to young women who’d like to be seen with a smart, handsome lad. As tends to happen in these kinds of movies, Brooks soon finds that separating his business from his emotions proves difficult.

The “Jane the Virgin” star Gina Rodriguez and the “Atlanta”/“Sorry to Bother You” actor Lakeith Stanfield play a newly broken-up couple in the writer-director Jennifer Kaytin Robinson’s “Someone Great,” a romantic comedy more about the bond between friends than about boy meets girl. When Rodriguez’s pop-culture reporter character Jenny gets a job at a magazine in San Francisco, she and her two best pals — played by DeWanda Wise and Brittany Snow — have one last wild romp together in New York City to help Jenny to get over her heartbreak and to bid her a spectacular farewell.

The Korean pop singer Lee Ji-eun — sometimes professionally known as IU — plays four different characters in “Persona,” a collection of short films by up-and-coming Korean directors. In “Love Set,” “Collector,” “Kiss Burn” and “Walking at Night,” Lee plays the lead in everything from a tennis drama to a surreal romance, in stories that shift from light comedy to something more gripping. This project is a change of pace for the musician, who’s been a staple on television in her home country for years, but has less experience making movies.

‘I Think You Should Leave with Tim Robinson’

The loud-voiced comic Tim Robinson is probably best-known for cocreating and co-starring in the sweetly eccentric sitcom “Detroiters,” with his friend Sam Richardson. But he also spent a few years as a writer and an occasional bit player on “Saturday Night Live.” Robinson puts that sketch training to use — along with his ability to make a strong, not always positive first impression — in the offbeat cringe-comedy show “I Think You Should Leave.” In a variety of scenarios, Robinson and others play characters so obnoxious and intense that they drive anyone in the immediate vicinity into fleeing.