Having a documentary made about you can prompt reflection, and “Every Act of Life” is having that effect on its subject, the four-time Tony-winning playwright and librettist Terrence McNally, who just turned 80.

“It’s very emotional for me,” Mr. McNally said the other day, seated in his light-filled Greenwich Village apartment with his husband, Tom Kirdahy. “Every Act of Life” was released digitally this week, after making the festival rounds.

But there is no conflict in Mr. McNally’s art-collecting principles, which are as clearheaded and articulately stated as the words he gives his characters in plays like “Master Class” and “Love! Valour! Compassion!”

“I like cityscapes in the city, and country landscapes in the country,” Mr. McNally said. He and Mr. Kirdahy also have a place in the Hamptons. “What I don’t have much of is portraits.”

Mr. McNally leans toward a particular brand of lyrical realism epitomized by the work of Fairfield Porter (1907-1975) and Jane Freilicher (1924-2014) — the world served up slightly abstracted, so as to heighten the emotions just beneath the surface. Not wholly unlike his own writing.

“Porter is probably my favorite American painter,” Mr. McNally said, gesturing to a small, squarish oil with evocative patches of green, “In the South Meadow” (1965). “This is the best one I could afford. It’s a sketch, but the one I wanted was $900,000.” 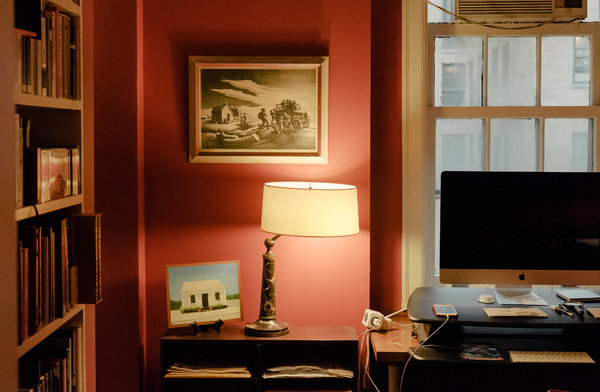 Mr. Kirdahy, a lawyer turned theatrical producer, interjected, “Terrence has never bought art as an investment. He does it to be transported.” They married in 2010, and Mr. Kirdahy said that collecting was mostly his husband’s department.

In the home office, there’s an original pencil drawing by Thomas Hart Benton from the illustrated edition of “The Grapes of Wrath,” given to Mr. McNally by John Steinbeck; as a young man he traveled the world with Steinbeck for nearly a year, tutoring the author’s sons.

Opposite the Porter is a limited-edition Matisse lithograph, depicting a man’s head, that Mr. McNally picked up nearly 60 years ago.

“It was the very first artwork I bought,” he said. “I love Matisse more than any other 20th-century European artist.”

Between the two homes, they own a few dozen artworks, they said, in a discussion about their surroundings which also addressed the collection of Mr. McNally’s long-ago ex, the playwright Edward Albee, who died in 2016. These are edited excerpts from the conversation.

Who’s the most represented artist here?

TERRENCE MCNALLY I have seven or eight pieces by Jane Freilicher. I’ve always liked her work. As my income increased, I could still afford her. I tried to buy another one this summer but I lost out.

The two Freilichers near the fireplace [“Still Life in Greenwich Village” (1977) and “The Black and White Set” (1990-91)] look like they depict this neighborhood.

MCNALLY She lived two blocks from here. We can see some of the same buildings that she painted. People said, “Don’t you want to meet her?” And I didn’t. If I had run into her somehow, it would have been thrilling. But to be set up? Those are awkward dates.

TOM KIRDAHY We love them. Sometimes we put the gas fire on, put the lights down low, and just stare at the paintings. It’s a beautiful thing to do.

Freilicher was not a trendy artist when she died.

MCNALLY I’ve never bought art that was in fashion. When I was with Edward Albee, he was very insulting about it. He only bought nonrepresentational art. He said, “You’ll be buying Grandma Moses next!” But he was a great collector — the apartment looked like a gallery, you could barely walk between all the works.

What would you have on the walls, given no constraints?

MCNALLY There are some Fairfield Porters I would give anything to own, but they are in the millions now. They belong in museums anyway. It’s selfish to own the Mona Lisa.

What’s the acid test for a work?

MCNALLY A great work is one you never get tired of — you find new value in it every day. With a lesser work, the light sort of fades. I recently got tired of a painting I had for 15 years, and I gave it to a friend. The light just went off for me.