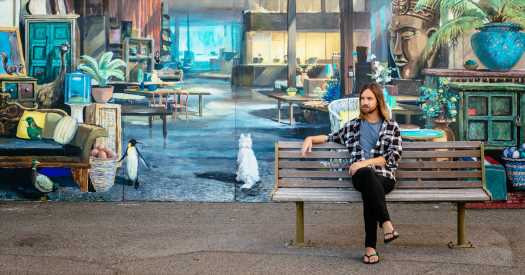 LOS ANGELES — Thick smoke from wildfires in Malibu was still visible from the terrace of the house in the Hollywood Hills where Kevin Parker, who records as the one-man studio band Tame Impala, was staying in November. He had come to Los Angeles to work on his fourth studio album. But just days earlier, he had narrowly escaped the flames.

Initially, I had been invited to visit sessions at a studio that Parker, who is 33 and lives in Perth, Australia, set up in a house he rented via Airbnb. “It was going to be four or five nights of getting into it and shutting out everything else,” he said.

But that house was in Malibu, and Parker said he had spent just one night recording there, drinking, smoking pot and laying down the foundation of a song on guitars, keyboards and simulated drums. Having what he calls “a one-man party,” he said, was a way to concentrate on the music, escaping “the pressures that I put on myself, the anticipation that other people may have.”

It has been four years since the release of Tame Impala’s third studio album, “Currents,” an international hit with songs that have racked up hundreds of millions of streams. Shortly before headlining Coachella in April, Tame Impala released the album’s first single, “Patience.” Its opening line: “Has it really been that long?”

Parker has clearly felt some pressure. “If I could make an album every year I would,” he said. “I’d love to. I hate to sound precious, or to say I can’t hurry it, but it’s true.”

He added: “Part of the thing about me starting an album is that I have to feel kind of worthless again to want to make music. I started making music when I was a kid as a way of feeling better about myself, you know? The ironic thing is, if I’m feeling on top of the world or feeling confident or like everything’s good, I don’t have the urge to make music.”

Glen Goetze, the A&R manager at Universal Music Australia who first signed Tame Impala and continues to advise Parker, said making music is “a stoically solitary process” for him.

“I know it turns his head inside out sometimes, not having a bandmate or a band, not working in any way where you can turn to other people,” Goetze said. “He’s got to go through all those phases to come out the other end with something as incredible as he does.”

On that night of substance-abetted recording in Malibu, Parker recalled, he was seeing double by the time he staggered into bed around 3 or 4 a.m. A few hours later he woke up, dazed, hearing voices from walkie-talkies. Outside, he saw clouds of smoke and flames on surrounding hillsides. The power was out; a Google search for “Malibu” on his phone brought up urgent warnings to evacuate.

He grabbed his laptop and hard drive — holding the makings of that unfinished album — along with his vintage 1960s Hofner bass guitar. “I’ve written every Tame Impala song on it,” he said. “I was, like, house burning down! What do I grab? My laptop and the Hofner. This was just split-second thinking. I looked at everything else and thought, ‘I don’t need that.’”

That night, he found out that the rented house and about $30,000 worth of his keyboards, guitars and other equipment had been destroyed. But he was still determined to get some recording done.

It took years for Parker to gather momentum for the new album: an unexpected consequence of the exploding popularity of “Currents” and the opportunities it brought. Tame Impala’s first two studio albums, “Innerspeaker” (2010) and “Lonerism” (2012) could easily be categorized as neo-psychedelic rock, awash in analog studio effects — reverb, phasing, wild stereo panning — and dizzying layers of overdubs. Yet while the sound was huge, the feeling was humble.

From the beginning, Parker’s lyrics for Tame Impala have often been dispatches from a solitary, self-doubting spirit. “Dare I face the real world?” he asked on Tame Impala’s debut; “I just don’t know where the hell I belong,” he sang in “Mind Mischief” on “Lonerism,” an album title that summed up the songs’ isolation and uncertainty. In conversation, Parker’s voice is a calm baritone; in his songs, it’s a plaintive, sustained tenor and falsetto, higher and more fragile, a tone of exposed emotions.

“That’s one of the sacrifices that I’ve gotten used to as being an artist,” he said. “You have to chop a bit of yourself off and give it to the world, and it’s out there. There’s always a sense of: ‘O.K., do I want to say this? Do I want to broadcast this?’ And there’s definitely hesitation. But at the end of the day the obvious answer is: ‘Of course. You have to.’ It wouldn’t be good if you weren’t exposing something you were hesitant to expose.” 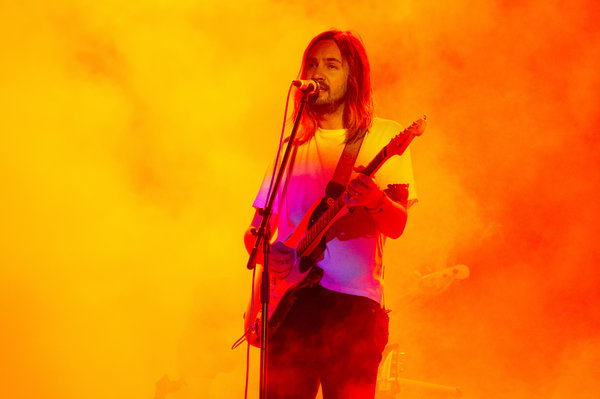 With “Currents” in 2015, Tame Impala moved decisively beyond 1960s sonics, invoking 1970s arena-rock and 1980s R&B along with dance music and electronic music across decades. The lyrics coped with both tortuous romance and an expanding career. “Yes, I’m Changing,” one song acknowledged, while others followed through on titles like “Love/Paranoia” and “The Less I Know the Better.” Straddling multiple musical eras but isolated at its core, the album found a broad audience yet still held the aura of a private discovery.

“I reckon a lot of artists get inspired by the idea of singing something to a crowd, many thousands of people,” Parker said. “But me, I prefer just to think about the kid wearing headphones riding the bus home from school, or having a bedroom headphone listening session. That’s where I come from.”

After “Currents” was released, Rihanna remade Tame Impala’s “New Person, Same Old Mistakes” (as “Same Ol’ Mistakes”) on her album “Anti,” and Parker found himself in demand. He worked on Mark Ronson’s album “Uptown Special” and teamed with him on Lady Gaga’s song “Perfect Illusion,” and was sought for studio collaborations with Kanye West, Kendrick Lamar, Travis Scott and others. Working with hip-hop producers gave Parker a new sense of historical freedom, he said.

“That’s the thing about samples,” he said. “You can have all this music that’s of all different types coming together, and if you can say something over the top of that that’s meaningful, and is coming from the same person as the rest of it, it will join it together. And people will never even realize that it’s different eras of music coming together.”

With Parker backed by his touring band, Tame Impala became a headliner at festivals worldwide; coming dates include Primavera Sound in Spain, Glastonbury in England and Lollapalooza in Chicago, along with Madison Square Garden shows on Aug. 21-22. To his own surprise, he found himself turning into something like an arena-rock frontman.

“I used to hunch over and cover my face with my hair and stare at my toes the whole time — to a room full of 200 people,” he said, chuckling. “But if I’m not going to perform, no one is. I’ve realized the value in me being an extrovert, or an exhibitionist, on stage. That it’s less about me and more about everyone in the audience.”

Back in November, Parker played me 10 tracks in various stages of completion, most awaiting vocal tracks and lyrics. Some had frisky grooves hinting at Stevie Wonder and Michael Jackson; one reimagined the grandiose buildups of 1970s power ballads.

One became “Borderline,” the only other new song Tame Impala has released besides “Patience.” It is filled with questions — “How was I to know this dark emotion?” — and muses about being “caught between the tides of pain and rapture,” mirrored in music that layers bouncy house-music piano chords with the beat of a rock ballad and a wistful, minor-key melody. “I like the idea on this album that people will argue about what it sounds like, or when it sounds like it’s from,” Parker said.

Now, festival and touring season has arrived with the album still unfinished. In a phone interview last week from Guadalajara, Mexico, where Tame Impala was performing, Parker had no firm title or release date for the album. But its structure and themes had become clear to him. “It’s taken shape in my head,” he said. “When I start making songs for an album, I don’t know what each one’s role is. But by the time I’m finished, each one has a color, each one has an identity, each one has a purpose.”

He added: “A lot of the songs carry this idea of time passing, of seeing your life flash before your eyes, being able to see clearly your life from this point onwards. I’m being swept by this notion of time passing. There’s something really intoxicating about it.”

Days after the Malibu wildfire, Parker had set up a basement studio in the Hollywood Hills house. He sat in a swivel chair facing a table with his computer, small monitor speakers and a toy skull staring at him. Keyboards and guitars were on the left; an Ampex reel-to-reel tape recorder and a battered Fuzz Face effects pedal on the floor were in one corner, with a rolling rack of mixers and compressors in the other. Price tags still dangled from some freshly delivered equipment. Most important, he had a new, promising four-bar melody that he had sung into his phone as a voice memo.

He picked a tempo, found the notes of the melody on the Hofner, recorded them and started playing them back in Ableton looping software. Then he built a chord progression under them on guitar, discarding some obvious choices — “I don’t want to throw down the first thing that fits” — before adding rhythm guitar chords, low and then high. With samples of his drum kit that he had recorded at home in Perth, he built a realistic-sounding R&B backbeat, then ran it through a compressor and the tape recorder for a more backdated sound. He improvised a bass line, sketching a counterpoint.

He worked fast and intuitively, immersed in the music, sometimes smiling, sometimes groaning. He hit some dead ends — “Terrible!” he observed at one point — but persisted, adding handclaps (his own, sampled), a reedy synthesizer improvisation and a keyboard-simulated saxophone section. In an hour and a half, he had built what could easily be a song’s middle section or an album’s instrumental interlude. “At this point,” he said, silencing the playback, “I’d probably go out and smoke a spliff, listen to it for two hours on end and wait for something to hit me. Or not.”

“And of course, the next day, as time goes on the feeling wanes,” he said with a shrug. “At the end, it’s kind of like back to feeling worthless again.”