“I had my kids in artist studios when they were 6 years old, which I think has been really defining for them and great for me as a working mother because I’ve been able to pull them into my world,” said Ms. Harrelson, sitting in the family home on Surprise Lake in Miami Beach. Austin Harrelson, her husband and a designer, landscaped the pool area outside and appointed the interior with furnishings by classic modernists including Karl Springer and Samuel Marx, while the family as an ensemble has had a say in the mix of art — often by women, some of them very young — in their home.

“We’ve all gone to Art Basel in Switzerland together for the last eight years,” Ms. Harrelson said.

It was the Art Basel closer to home — the sister fair two miles away in Miami Beach — that first immersed Ms. Harrelson in visual art when she became editor in chief of Art Basel magazine, the official publication of the fair, 12 years ago. “That was really when I started to become captivated with the contemporary art world,” said Ms. Harrelson, who earlier in her journalism career had focused on fashion, style, entertainment and design. 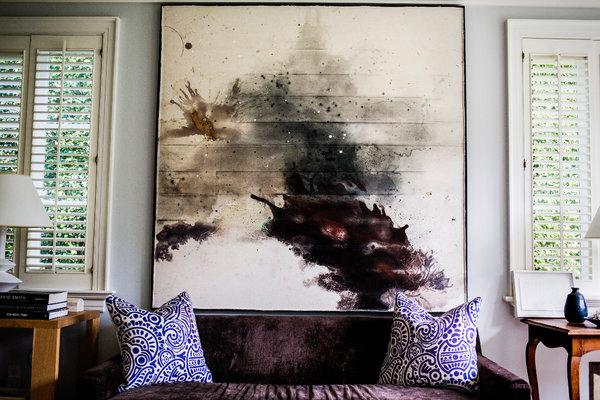 Ten years ago, at the art fair in Switzerland, the couple bought their first piece together, a painting by Spencer Sweeney of a figure who appears to have removed his own face and is holding it in contemplation. Today, they own close to 200 works by artists including Lucy Dodd (who paints with natural elements like yew berries and avocado skins), Tschabalala Self (who depicts exaggerated black female bodies) and Ella Kruglyanskaya (who makes stylized, cartoonish representations of women).

Without many outlets for journalism in Miami, in 2011 Ms. Harrelson launched her own, a magazine called Cultured. “We have a particular focus on fostering the careers of young artists,” she said of the publication. The same is true of what is on her walls. “I’m not afraid to cover people not well known and we’re not afraid to buy unknown artists.”

Following are edited excerpts from the conversation.

Has working on Cultured fed your collecting?

I’ve met a lot of young artists through shooting more established artists for the magazine. I was with two of my kids shooting Mary Weatherford in 2016 and she had a couple of studio assistants in there. One of them was Timo Fahler, who runs an art space in L.A. called BBQLA. Mary said, “You should not be in here with me today; you should go visiting.” That led not only to us collecting Timo’s work but also to a great friendship.

We just bought this Bunny Rogers sculpture, an artist who was in the magazine’s first “30 Under 35” list three years ago. That’s Elle Pérez, a young photographer who’s also in our “30 Under 35.”

Bringing your kids along to these things, are they really all on board?

My 18-year-old son, Quinn, has already curated six shows, including a show at BBQLA. He [selected] the Janiva Ellis painting in his room. My middle daughter, Audrey [15], has definitely been on board and very curious. She’s obsessed with fashion. The best way to get to my youngest daughter, India, is through the story. If I can get an artist to tell her about the materials or how they put it together, she loves process. But last year, right before her 13th birthday, she did say to me, “Mom, can we please not go to a museum today?” There’s definitely some eye-rolling. I’m constantly trying to juggle and make everyone happy.

Do you always have to agree on things?

I don’t think we’ve ever disagreed. My husband likes the auctions — he and my son pore over the auction catalogs. This year in Switzerland, I turned around and saw my middle daughter had engaged a dealer about that little Jeanette Mundt. Audrey led the charge. I’m always happy to see them start a conversation. There are a lot of myths around collecting contemporary art. You can learn a lot by asking questions and by listening.

Are you consciously buying women artists?

We don’t have a particular intention. But it seems in the last couple of years, we’ve been buying more women artists. I’m always attracted to those kinds of stories.