Surprisingly cute in his youth, more intelligent than his peers, he eventually grew into a ruthless, bloodthirsty wrecker who made you want to run for your life. No, we’re not talking about a relationship gone wrong. This is a piece about tyrannosaurs, the undefeated bosses of the Cretaceous Period, stomping and chomping their way across earth’s northern supercontinent.

For a hundred million years, during one of the warmest eras in geological history, these carnivores fixed their lunch with teeth serrated like hacksaws, and at the end of their reign they had evolved into some of the largest animals ever. Put a half-dozen football teams on a scale and your dinosaur friend will still have a few hundred pounds on them.

[Read more about the latest in T. rex research.]

The hairless apes walking through the American Museum of Natural History can’t get enough of tyrannosaurs, especially the last and largest of the family, given the appropriately imperial name Tyrannosaurus rex.

Though T. rex galumphed in what is now western North America, it has a New York pedigree, too; it was curators at this museum who first discovered this massive predator, and brought its bones from Hell Creek, Mont., to Central Park West. (“The prize fighter of antiquity,” tooted this newspaper when the skeleton first went on display in 1906.) 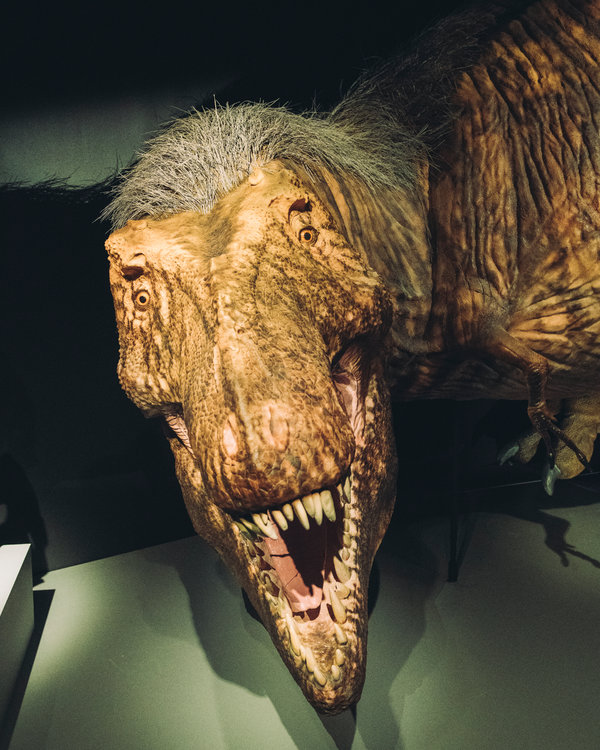 The museum actually has two T. rex skeletons, the second and more complete of which now lords over the Hall of Saurischian Dinosaurs upstairs. Initially it was assembled to stand upright, tail dragging on the floor. It now appears in a more accurate stalking position, its spine roughly parallel to the floor, its skull dipped low enough to permit some nice dino selfies.

Now “T. rex: The Ultimate Predator,” a new exhibition that will run through the summer of 2020, gives an up-to-date view of everyone’s favorite prehistoric pugilist, and also introduces the many other tyrannosaurs that preceded T. rex, some discovered only this century in China and Mongolia. Along with a cast of the T. rex specimen upstairs, its bones rearranged into an alternative crouch, the museum is presenting a new full-size model of the emperor dinosaur, its head and tail dappled with — believe it! — soft, bristly white feathers.

[Check out our Culture Calendar.]

Claws and toe bones more than 60 million years old share space with facsimiles of the newest vintage; this is the first show for which the natural history museum has extensively used 3-D printing, not just traditional casting, to reproduce specimens in other collections. There’s also a mildly whiz-bang virtual reality game, which tasks you with reconstructing a T. rex skeleton. You’ll then cower in terror as it comes to life. It will delight older children, and enrage kids too young to wear the headsets.

T. rex emerged about 65 million years ago, at the very end of the Cretaceous. It lived on a planet of high temperatures, when the air was thick with carbon dioxide, and while some dinosaurs were content to munch grass, others would be happy to find a baby T. rex or two for hors d’oeuvres. An adorable model here of a young T. rex, hardly bigger than a Christmas goose, reveals just how hazardous dino-childhood would have been, and how quickly the species grew. Most T. rexes never made it past age 1, but those who did could later put on 100 pounds a month or more, maturing into an 18,000-pound tough guy, or girl. (There’s no saying what sex a T. rex is; fossils give few hints of whether a dinosaur was male or female, and some researchers question whether the limited number of specimens provides enough evidence to make sex distinctions.)

Yet smaller, faster tyrannosaurs — bipedal carnivores distinguished by their long tails, spindly arms, large skulls and D-shaped front teeth — first emerged 100 million years before T. rex, and were not always the kings of the humid Mesozoic earth. This show includes models of several earlier tyrannosaurs, including Proceratosaurus (167 million years ago), with chickenlike front claws and a thin crest on its snout, and Xiongguanlong (100 million years ago), a more lithe, more elegant tyrannosaur with a long, narrow head, discovered in 2009.

Another recent discovery is the hollow-boned Dilong (126 million years ago), the first tyrannosaur found with fossilized feathers — discovered in 2004 by Mark Norell, the museum’s chairman of paleontology and the curator of this show, and five Chinese colleagues. (Gregory Erickson, a professor at Florida State University, was a consultant on the exhibition.) Scientists now believe that all tyrannosaurs had feathers; while small species like Dilong would have been covered with them, the adult T. rex probably had just patches for display.

The advantage T. rex had on its ancestors was its growth spurt. One model here depicts a specimen at 4 years old, its body covered in beige down, its dangly little arms too short to reach its mouth, from which fearsome conical teeth protrude like stalactites. Already, at 175 pounds, the young T. rex was as large as any other predator on the prowl. By age 12 it would have ballooned to 1,200 pounds, and would grow more than tenfold again; by its 20s, it could weigh as much as 9 tons.

With size came strength, not least in its huge jaw, whose teeth could crush prey with 7,800 pounds of force, more than any known animal before or since. To get a sense of it, imagine the 66-million-year-old fossilized T. rex tooth, as thick and curved as a banana, bearing down into your flesh with the weight of a midsize U-Haul truck. Now imagine around 60 of them.

With chompers like that you could feast on anything, including smaller or weaker T. rexes; these guys weren’t just predators, but cannibals. Kids might get a kick out of a cast here of dinosaur excrement, which contains large helpings of bone. But T. rex, contra its current reputation as the big dumb bruiser of the Cretaceous, had a more thoughtful side. A cast made from the hollow of a T. rex skull, plus a 3-D printed representation of the brain of a related dinosaur, reveal an oversize olfactory lobe, suggesting the beast could smell prey from long distances. The big new model shows how its large eyes, facing forward rather than to either side, were far enough apart to allow for unrivaled depth perception. A hundred million years of evolution produced the perfect apparatus for death.

It had only a short time at the top, in Paleolithic terms. Some 65 million years ago, the hypothesis goes, an asteroid made impact in what is now the Yucatán Peninsula, triggering a perpetual winter that killed off T. rex and 75 percent of the rest of the Earth’s species. It was the fifth and last great extinction event, unless you count the one many scientists believe is underway today.

For the kids who will throng this new exhibition, and who will adore this show’s colorful animations and fossilized dino poop, T. rex may still appear to be a thrilling monster. But staring in the eyes of the feather-flecked annihilators here, adults may have a more uncanny feeling of identification with the beasts at the pinnacle of the food chain. You can be a killer of unprecedented savagery, but the climate always takes the coup de grâce. 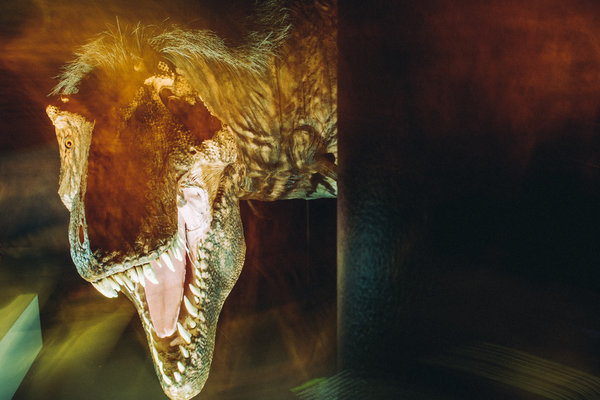 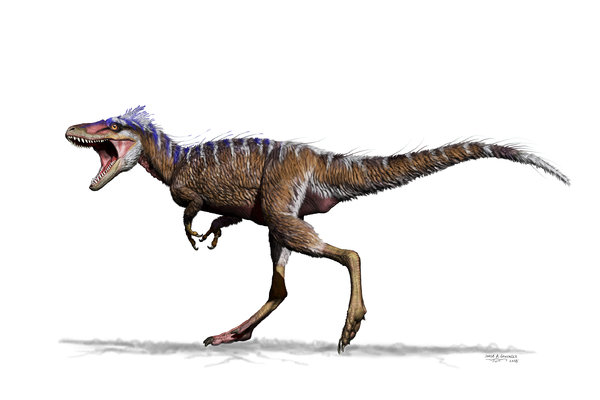