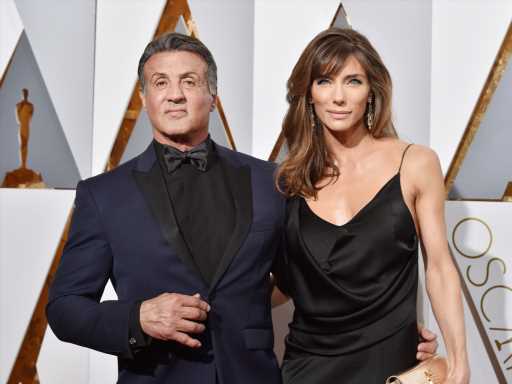 When a husband covers up a tattoo of his wife’s face, you know something is up in the marriage. That’s exactly what Sylvester Stallone did — trading Jennifer’s face for a portrait of a dog on his bicep — while working on location in Oklahoma City. Less than 24 hours later, it was revealed that Jennifer had filed for divorce last week in Palm Beach County, Florida.

The shocking Instagram post has since been deleted, but the new ink was of Butkus, the dog from Sly’s Rocky movies, etched over Jennifer’s face (How insulting!), per Closer Weekly. It was tattoo artist Zach Perez, who shared his artwork, but he probably didn’t know he was also releasing major Hollywood gossip at the same time. The couple recently celebrated their 25th anniversary and share three daughters, Sophia, 25, Sistine, 24, and Scarlet, 20.

About a week ago, Jennifer posted a gorgeous snapshot with her girls, but that also might have been an indication that there was trouble in paradise with Sylvester. “These girls are my priority. nothing else matters. The 4 of us forever. #truth #family #forever.” Her middle child Sistine chimed in the comments, “Strongest woman I know” while oldest daughter Sophia added, “You are our rock, cheerleader, and most incredible mom. We are so lucky to have you. love you so much.” It definitely feels like something was happening in their family, especially now that the divorce news has been revealed.

While Sylvester and Jennifer seemed to have a rock-solid marriage over the years, their early days of dating were anything but blissful. Six years into dating, the then-model received a six-page breakup letter via Fed Ex (yes, you read that correctly) from Sylvester, who admitted he was having an affair with supermodel Janice Dickinson, and she was pregnant with his child (DNA tests later proved that he was not the father). Jennifer described that painful time to People, sharing, “It hit me like a ton of bricks. I had no idea this was going to happen. We talked about us having children, about when I was going to get pregnant. We were already picking names, marking down names that he liked, and I liked.” They eventually reconciled and started their own family, but this latest chapter in their romance has us wondering what when wrong after a quarter of a century together — it feels like there is more to the story.

Before you go, click here for all the celebrity splits and divorces we never saw coming.