The song is indistinct at first, as the barefoot man descends from the ceiling in hazy darkness. And when we can make out the tune — “Daisy, Daisy, give me your answer, do” — it’s almost spooky in its old-timey sweetness, at odds with the spare, forbidding space we see before us.

This is the start of the French director-choreographer Raphaëlle Boitel’s stark and stunning “When Angels Fall,” a blend of circus and dance set in a mechanized dystopia whose inhabitants yearn for human connection — a bicycle built for two.

But the main pairing in this exquisitely designed and surprisingly moving work, receiving its American premiere at Peak Performances in Montclair, N.J., is between light and the human form. Illumination (by Tristan Baudoin, who also designed the set) is often kept to a minimum, all the better to see individual beams, like the sharp light that silhouettes the jerky, Chaplinesque movement of that barefoot man (Loïc Leviel).

On the capacious stage of the Alexander Kasser Theater at Montclair State University, “When Angels Fall” borrows much from the language of film — the scope of the audience’s vantage; the largeness of scale; the emotion-stirring music (by Arthur Bison), which often sounds like it could underscore a silent movie.

Yet it’s the liveness of the performers that lends this piece urgency. Encased in drab suits — some of them amusingly animate, turning their wearers into marionettes — they struggle to escape. (Costumes are by Lilou Hérin, rigging and machinery by Nicolas Lourdelle.)

In this regimented world, it is a shock the first time someone throws off a jacket and we see an expanse of flesh. But physicality is insistent here, and so is the human spirit, which finds suspenseful, exalted expression as one woman (Alba Faivre, daring with a rope) climbs and falls and climbs in an attempt to get out.

But it’s in stillness that Ms. Boitel finds the power to break our hearts. Off in a corner, a small figure (Emily Zuckerman) crouches, enraptured. With her gaze trained offstage, she is bathed in warm light, holding a whispered conversation from which she refuses to be dragged away. 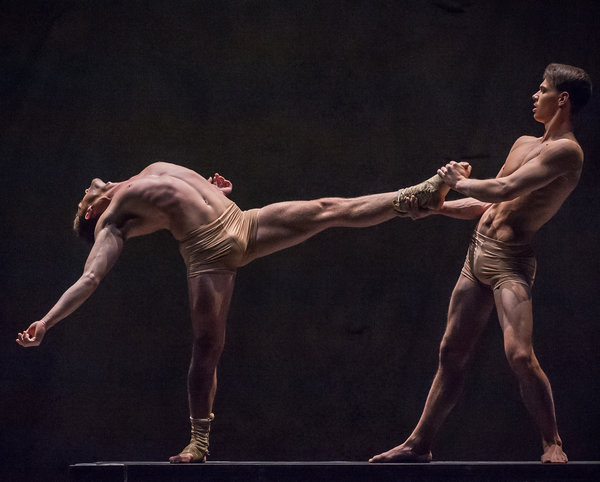 Whatever she sees in that brightness, its presence vivifies her. She has found someone to commune with, it seems, if only in her mind.

Companionship is also at the core of “Non Solus,” at the Brooklyn Academy of Music, where a curtain of sorts obscures the stage of the Howard Gilman Opera House before the show begins.

It looks like puckered plastic sheeting, and it bulges at the sides like the walls of an inflatable house. But when the lights go down, it does not rise. Instead it becomes a blurry scrim, and through it we see glowing orbs of light alive with movement — a miniature man inside each of them, descending.

It’s an illusion, dreamily romantic and set to music, and like much of what happens in this two-man work of physical theater from Recirquel Company Budapest, we’re not sure at first what we’re looking at. Then the curtain is ripped away and it billows like an enchanted wave of water, a sculptural form that becomes a dance partner for the muscular man revealed alone onstage.

Ending that aloneness is the whole point of “Non Solus” — or so it seemed to me. Created by the director-choreographer Bence Vagi, it is performed by an acrobat, Renato Illes, and a dancer, Gabor Zsiros. Mr. Vagi has said that the piece is about body and soul, but it can also be read as a birth-to-death narrative about two human beings, walking and flying and dancing through life together.

The flying, of course, is the most glamorous part, and Mr. Illes is a riveting aerialist. On his own with a rope to climb, he flips and spins and twines around it like a lover. On a trapeze with Mr. Zsiros — who if he were an element would be solid earth to Mr. Illes’s fire — Mr. Illes is thrilling, lithe and quick in feats of perfect equilibrium. Of course, much of that time he is balancing on, or suspended by, Mr. Zsiros.

If the two are evenly matched in talent, this show doesn’t give Mr. Zsiros the chance to prove it. His solo dance segments are less about the human body than about the movement of material in air (that filmy plastic, a fluttering silken skirt), which is sometimes beautiful but elsewhere underwhelming, even when dramatic music (by Gabor Terjek) insists otherwise.

Gradually we begin to understand how the show’s visual design works (the reflective panels that line Arpad Ivanyi’s set, lit by Attila Lenzser; the projections and animation by Andras Sass, Tamas Vaspori and Laszlo Czigany), and some of its mystery dissipates. But that’s a reasonable metaphor, too, for a deepening relationship — tricks of the light giving way to reality.