The Clash of the ‘Star Wars’ References

Senator Mike Lee of Utah on Wednesday gave a speech on the Senate floor that was sarcastic to the point of absurdity. In a sendup of the Green New Deal, a sweeping climate proposal put forward by left-wing Democrats, Lee used an image of Luke Skywalker riding a Tauntaun in a “Star Wars” film, as well as a painting of President Ronald Reagan on a dinosaur.

Stephen Colbert mimicked his technique, breaking out an easel, pictures and his own “Star Wars” reference. “Senator Lee, you’re the most embarrassing part of a storied American institution. You, sir, are the Jar Jar Binks of the Senate,” he said, unveiling a picture of the reviled character.

Later, Colbert flipped to an image of Mr. T firing a crossbow while riding on the back of a giant sloth. “Why, you ask?” he said. “Because my graphics team went and got high.”

She was particularly bothered by a letter sent by President Trump’s 2020 campaign to TV producers, suggesting that they should refuse to bring on their shows certain Democrats who endorsed the idea that Trump had colluded with Russia’s election interference.

“Wow. Usually when he writes to TV producers it’s to ask them to hide footage of him saying the N-word.” — SAMANTHA BEE

She also accused Barr of omitting some important information:

“Mueller was tasked with discovering whether Trump or his circle were under the sway of a foreign adversary, and we still have no idea what he found. Barr didn’t mention it at all — which is something, considering that he already quoted the Mueller report as selectively as a review on the poster for a [expletive] movie. ‘“Transformers 8” is a giant piece of … movie!’” — SAMANTHA BEE

Trump’s Way of Getting ‘on America’s Good Side’

Colbert poked fun at Trump for doubling down on his fight against the Affordable Care Act now that the Mueller inquiry is over. Colbert said it was a poor strategic decision at best.

“He has been rope-a-dopin’ this Mueller thing, O.K., for two years — and now he finally has a chance to get on America’s good side. Step 1: Take away everyone’s health care.” — STEPHEN COLBERT

“Mr. Trump! You’ve just been cleared of collusion. What are you going to do now? [impersonating Trump] ‘I’m gonna roll a diabetic off a cliff. C’mon sweetness, let’s go.’” — STEPHEN COLBERT

“He’s a concert pianist and speaks seven languages — including Norwegian, which he learned just so that he could read Norwegian books. Compare that to America’s current president, who has read zero books and is fluent in zero languages.” — TREVOR NOAH, on the Democratic presidential candidate Pete Buttigieg

“There was a new survey, and according to this survey, last year, in 2018, Americans made almost $40 billion worth of purchases while drunk. More than a quarter of American adults, about 53 million people, said they bought things while under the influence. Which could explain the popularity of Uggs.” — JIMMY KIMMEL

As Jimmy Kimmel continues to troll Gonzaga University, a few academic officials from the school visited his show.

Marsai Martin, who first starred in “Black-ish” when she was just 10 years old, has a new movie in theaters: “Little,” in which a despotic boss is transformed into a 13-year-old version of herself. Martin will visit “Jimmy Kimmel Live!” on Thursday to talk about her budding career and new film. 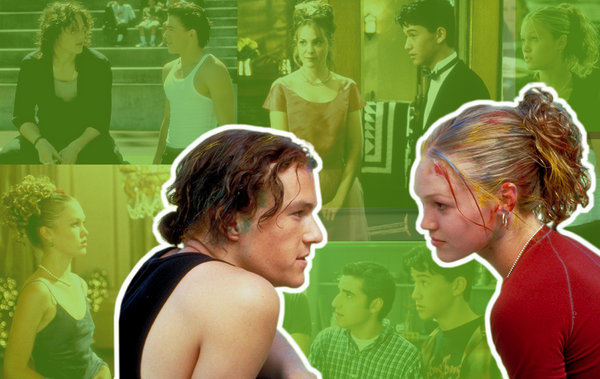 Here’s a loving look back at “10 Things I Hate About You,” one of the most enduring romantic comedies of the 1990s, on the 20th anniversary of its release, featuring interviews with some of its stars, its director and others.