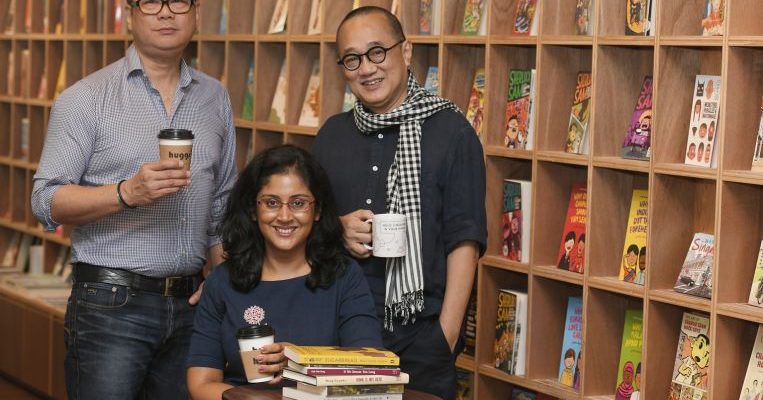 The Huggs-Epigram Coffee Bookshop, which opens today at the Urban Redevelopment Authority centre at 45 Maxwell Road, will sell only books that are about Singapore, brought out by local publishers or written by Singaporeans.

It will carry around 450 titles by 300 authors and illustrators from about 20 publishers. The books are displayed along the length of one wall from floor to ceiling and range from poetry anthologies to graphic novels to bestsellers such as Kevin Kwan’s Crazy Rich Asians (2013).

There will also be a table set aside for a local author or artist during opening hours to do readings, meet fans or simply write or draw.

Asked why he wanted to set up a shop that sells just Singapore books, Epigram Books founder Edmund Wee, 66, said: “What’s the point of repeating what everyone else is offering?

“When we set up Epigram Books nearly eight years ago in publishing, we wanted to champion Singapore literature and books.

“Extending our operations into the retail scene is marked by this same desire. More support should be given to local publishers and authors and this bookstore is a reflection of this belief.”

Huggs Coffee owner Ron Choo, 55, who worked for Mr Wee as an account director a decade ago, said it has long been a dream of his to have a coffee bookshop, ever since his childhood visits to MPH Bookstore, which had an in-house cafe.

The shop has an area of almost 990 sq ft and can seat between 40 and 50 people. It will sell both espresso-based and Nanyang-style coffees as well as pastries, wraps, sandwiches and lunch sets.

Singaporean author Balli Kaur Jaswal, 35, will be one of the authors taking up residence in the bookshop, where she plans to work on her next book.

“After setting my last two novels in England and India, my current work-in-progress is set in Singapore,” she said.

“I think being surrounded by other Singapore writing will motivate and inspire me.”

She added: “It’s an exciting thought to have access to so much local writing in one place. Some great Singlit (Singapore literature) titles can slip through the cracks in bigger bookstores where they are fighting for space with other local and international books, so this is a great move in terms of providing a platform for all narratives.”

Singapore’s retail market is a famously tough one for bookstores, although at least one other independent bookshop, The Moon in Chinatown, has opened in the past year. At least half the books there are by female writers.

“Will it be difficult?” mused Mr Wee. “Yes. But our hope is that Singaporeans and visitors alike will support us. We want to tell our visitors from overseas that the best souvenir they can bring home with them is a Singapore book.”