Every two years, December gets a little brighter when the dancers of the all-male Les Ballets Trockadero de Monte Carlo fasten their tutus, lace up their point shoes and leap into the Joyce Theater with all the grandiose absurdity they can muster. But this company, revered for injecting humor into classical ballet, amounts to more than a stream of jokes: Its dancers have technical chops.

Led by the artistic director Tory Dobrin, the group, at the Joyce through Dec. 30, has a robust repertory that slyly skews classics like “Swan Lake” and “The Little Humpbacked Horse.” This season, after a 15-year break, the Trocks, as the troupe is known, revive Robert La Fosse’s sparkling “Stars and Stripes Forever” (inspired by George Balanchine’s 1958 ballet) and present two new pas de deux: “Tchaikovsky Pas de Deux,” a stand-alone work — again, after Balanchine — and “Harlequinade.”

The Trocks had a rough year. In January, Chase Johnsey, a leading dancer, accused the company of harassment and discrimination, saying that he had been criticized for appearing too feminine offstage and that his job would be in jeopardy if he chose to undergo a gender transition. An outside investigation did not substantiate his claims.

Mr. Dobrin declined to talk specifically about the matter in an interview, but in a statement said that the company “has been at the forefront of pushing the boundaries of L.G.B.T. and gender issues since its founding in 1974” and that it “has long championed diversity.”

With gender issues so front and center these days, the Trocks — both imaginative and playful — are as relevant as ever. For them, femininity and masculinity are facets of characterization. Each dancer has a female and male persona and individual comic flair. As Mr. Dobrin put it, “You can’t force Lucille Ball to be Gracie Allen.”

Recently, Mr. Dobrin spoke about “Stars and Stripes,” how not to lose your face and how dancing in drag has gone from career wrecker to career choice. Here are edited excerpts from the conversation. 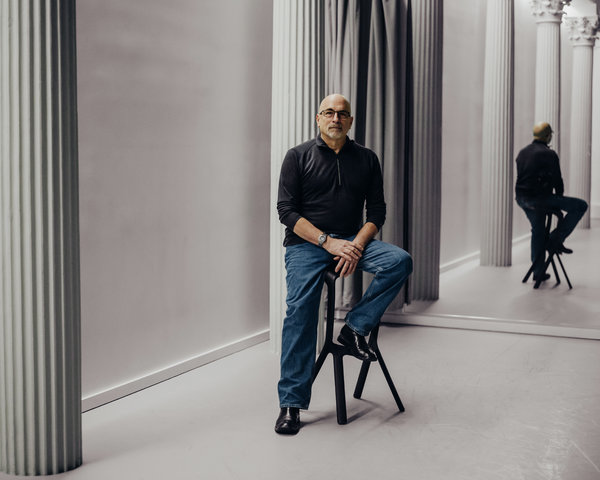 What made you decide to bring back “Stars and Stripes Forever”?

We were going to do “Stars” the last time we were at the Joyce but I canceled it. Trump won. Now I think it’s appropriate. We did it yesterday in rehearsal and it looked really good. It’s really hard for us.

It’s fast. There’s a ton of vocabulary, they’re on point the entire time and there are only 12 people in it. New York City Ballet has hundreds. [Laughs] Not every ballerina’s in every act, but our guys are.

You joined Trockadero as a dancer in 1980. What was the culture like?

Dancing in drag was not considered something that respectable people did. Everyone told me not to do it — it was considered a career wrecker. Now it’s completely a career choice.

It was really disorganized. We were basically told to shut up and get out there. When I became the director, I thought I’m going to do two things: get organized and be nice. You can say the same thing in a harsh tone or a positive tone, and I’ve gotten good at saying things very nicely. It’s very exhausting.

How do you get through it?

How did the company cope during the AIDS crisis?

Being a company made up exclusively of gay men, except for some of the management, it was horrifying. We almost closed around 1990. But it also did kind of free us up.

In the ’80s, it was all about playing a game for the presenter and for the audience and not going too far. After the AIDS crisis, we started being more open and free and creative about what we wanted to do. Simultaneously we were going to Japan a lot. The whole culture of Trockadero is very Japanese.

Have you ever been to Kabuki? The lighting is bright. You go to things now and I want to scream, “Turn on the lights!” So we have the brightest possible light. The important thing is not necessarily to see the dancing or the body. One of the things we say is, “You’ve lost your face.” You need to engage the cheekbones and then it will be an alive position even if you’re just standing there.

How have gender issues affected the company over time?

For a gay man or a lesbian of my age — I’m 64 — the main bullying technique was to call a gay man a girl, or a lesbian a boy. It was my generation who wanted to prove to the world that we weren’t trying to be the other sex. Now we’re having a different kind of sensibility.

We do really concentrate on our technical aspect. We’re not trying to impersonate women, so that has not changed. What we’re really trying to be more clear about is that the relationships are real, the reactions are real — when you’re talking to the prince, and the prince is aggravating, you have to be aggravated. It’s about acting. Good acting.

Has there been a dancer in Trockadero who transitioned from female to male?

Yes. He’s not in the company anymore, but he was born a woman. I didn’t even know when he auditioned. And nor did I care. He auditioned, he could do the job, and I hired him. The issue is that you have to be able to do the dancing.

What would happen with in the case of a dancer transitioning from male to female?

Transitioning isn’t getting on the subway and getting off the subway. It’s a very long process. I can’t imagine someone transitioning while they were busy with a career in the physical sense. And if someone does want to transition, I have always said to them — and there have been a couple of instances — “Your job is not in jeopardy.”

How do you feel about contemporary ballet? Would you ever parody a work by, say, Wayne McGregor — with swirling movement and thrashing legs — or would that be boring?

It would be funny for five minutes. Or three. I think our audience really wants to see the old-world style: tutu, point shoes, wig, eyelashes, lurid red lips, over-the-top expressions. I asked Mark Morris a million years ago if he would do a “Carmen” or something, but it’s too expensive. And no choreographer in their right mind would want us to play around with it when they weren’t around.