Last December, the theater director Tina Satter was stuck at a desk, temping as a receptionist, when she fell down an internet rabbit hole. After reading the New York magazine profile of Reality Winner — the 20-something military contractor charged with leaking a single top-secret document about Russian election hacking — Ms. Satter clicked a link to a blog post about Ms. Winner’s pantyhose, and then another link to a grainy PDF of an official F.B.I. transcript.

It recorded the moment in June 2017 when a fleet of federal agents entered Ms. Winner’s Georgia home, interrogated her and extracted a confession. Ms. Satter read the transcript online, but when she recalls it now, she makes the gesture of dramatically flipping pages in the air.

“Immediately I thought, This is a play,” she said. “This is a thriller.”

Reading the government document through the lens of a director, Ms. Satter saw a title printed across the top — “VERBATIM TRANSCRIPTION” — followed by a list of “participants,” or characters: Reality Winner, whose name alone feels theatrical; the two special agents who interrogated her that day; and a mysterious figure listed only as “Unknown Male.” The transcript was intriguing in its precision. Every stutter, sigh, and stray sound was noted.

It was also jumping with subtext: Even as they circled Ms. Winner with an espionage charge, the F.B.I. agents made small talk about the weather, CrossFit and her cat. Everyone there was struggling to act casual in the least casual of circumstances.

And then there was Ms. Winner herself, with whom Ms. Satter quickly grew fascinated.

Ms. Winner is an Air Force veteran fluent in several Afghan languages. In 2017, she was 25 and working at a Georgia contractor complex, translating communications related to Iranian aerospace. She taught yoga for fun and scribbled on “pretty paper” at work. She tweeted insults about President Trump. She owned guns — pink guns. In the transcript, she toggles seamlessly between high-level intelligence language and jokes about her “resting bitch face.”

Ms. Winner seemed to represent a new kind of figure. “I could totally relate to her dismay at living through America over the past two years, and her sort of pop response to it,” Ms. Satter said. “This is such a patriot of right now.” 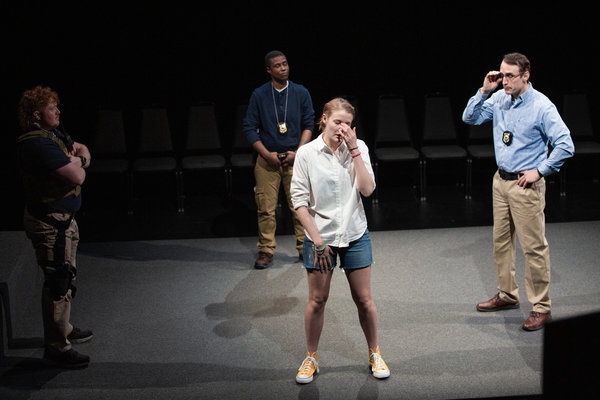 She immediately sent the transcript to a collaborator, the actress Emily Davis, with the note: “You could play her.” Beginning January 4, Ms. Satter will direct Ms. Davis in “Is This a Room: Reality Winner Verbatim Transcription” at The Kitchen.

Ms. Satter’s experimental theater company, Half Straddle, has never before taken on a real-life subject. The troupe rarely deals in realism. “Our plays,” Ms. Satter explained, “are usually these wholly made up worlds,” drawn from feminist, queer and adolescent subcultures.

But Ms. Winner’s status as a young woman navigating an unfamiliar world connected it to other Half Straddle shows. Ms. Winner opens a window into a new kind of subculture: the banal office grind at the heart of the American security state, which has expanded so relentlessly that thousands of otherwise ordinary Americans have insight into classified material. Thanks to websites that surface the day’s “trending” classified “articles,” which Ms. Winner browsed while bored at work, even top-secret material begins to seem almost public.

And while “Is This a Room” is on its face a re-enactment, there are elements of the transcript that pitch it into the surreal, and allow for interpretive space.

Lines attributed to “Unknown Male” — dreamlike fragments of loose F.B.I. chatter picked up by the interrogators’ recorder — are all played on stage by Half Straddle company member Becca Blackwell. (The play’s title, “Is This a Room,” is one of them.) Swaths of the transcript are redacted in black, and in the weeks leading up to the premiere, Ms. Satter was still puzzling out how to dramatize them.

On stage, the surreality will be punctuated by the disorienting sounds of Sanae Yamada, a musician who has written a synth-based score as well as a pop song about Ms. Winner called “Pretty Paper.”

At a recent rehearsal at the Kitchen, Ms. Satter stalked around the bare set in a Mickey Mouse T-shirt, blocking the strange moment when the F.B.I. agents (played by Pete Simpson and T.L. Thompson) drum what sounds like a confession out of Ms. Winner, and then seamlessly return to discussing her cat, who is on a diet. (“Oh, she’s a big girl,” Unknown Male tells Ms. Winner.) Here the actors slowed their speech and tipped their bodies, giving the impression of a mind spinning, as the synth music closed in.

And yet the play is grounded in the fact that this all really happened to a real person: a person who is in prison. (After pleading guilty to one felony count, Ms. Winner was sentenced to more than five years in August, the longest sentence ever imposed in federal court for such a leak.)

The transcript itself was a crucial artifact in the legal proceedings. Her defense argued that the transcript, and its apparent confession, ought to be barred from court, as the F.B.I. never read Ms. Winner her Miranda rights or told her she was free to leave her home.

But the government argued that the transcript proved that the agents had been so “exceedingly friendly” to Ms. Winner that she could not have been forced into talking. Staging the transcript felt like a way to reveal its hidden power dynamics. “There was so much happening right underneath the surface of the language,” said Ms. Davis.

The actress shares both a physical resemblance to Ms. Winner and a South Texas background. She sees Ms. Winner as a “vibrant and sparkly person” who became isolated by her work for her country and ended up in a “lonely, vulnerable place.” And she is sensitive to the fact that in the play, she is moving about the world as Ms. Winner while Ms. Winner herself is locked away.

Those sensitivities were heightened when Billie Winner-Davis, Reality’s mother, heard about the production and reached out.

Ms. Satter and Ms. Davis have since been in close contact with her, and have exchanged letters with Reality herself. Both sides have approach the contents of the play gingerly; Ms. Satter has not asked Ms. Davis-Winner for insights into her daughter, and Ms. Davis-Winner has not inquired about the theatermakers’ process. (She will attend the first performance, with some trepidation: While she is eager for others to learn of her daughter’s story, “I don’t know whether I’ll be able to sit through it all,” she said.)

She did assist in one way: She sent a photograph the F.B.I. took of Reality outside her home on the day she was arrested, which inspired Ms. Davis’s costume. In the photo, she’s leaning against a brick wall in jean shorts and canary-yellow Converse. Her hands are clasped politely in front of her and her eyes are turned down.

It’s an image of Ms. Winner on the precipice between regular young woman and accused felon. She is outside in the Georgia sun, but the F.B.I. has her in its sights.