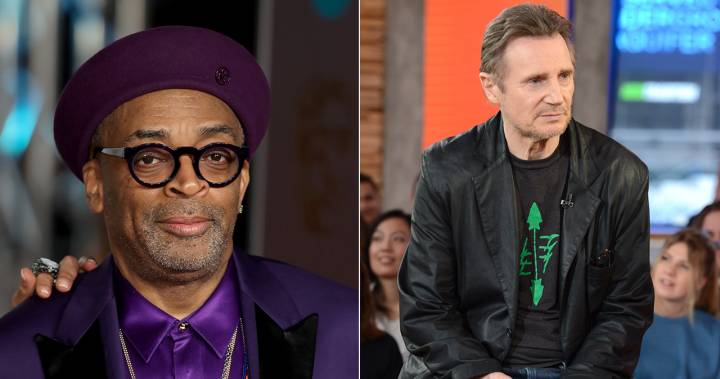 Director Spike Lee says that we live in “a crazy, bizarre” world after hearing Liam Neeson’s comments about the actor’s violent thoughts about killing a random black person after learning a friend was raped.

“What a crazy, crazy, bizarre world we live in,” Lee said in an interview Sunday on The Andrew Marr Show. “I’ve not spoken to Liam. … I don’t know why he did it, but he did it, so …”

Last week, Neeson was quoted in an interview by the Independent describing his violent thoughts about killing a black person nearly 40 years ago after learning that someone close to him had been raped.

Neeson said he had asked about the race of the attacker, along with other descriptive characteristics, before heading out into black neighbourhoods on multiple occasions “looking to be set upon so that I could unleash physical violence.”

He said he was walking up and down the street with a club hoping a “black bastard” would “have a go at me about something … so that I could kill him.”

He also said he had a “primal urge to lash out” before he was shocked by his reaction and sought help from a priest and friends.

The She’s Gotta Have It director was wondering if Neeson just needed to talk about the situation to get it off his chest.

“I know he’s Catholic. Is this a form of confession?” Lee said.

“He’s going through it,” Lee said. “I just saw one of the clips from his apology tour and he did not look happy.

Lee went on to say that he once considered casting Neeson for a project, but it was a long time ago and the movie was never made.

When he was asked if he would cast Neeson now, Lee shook his head no. He said that the 66-year-old actor is now too old for that particular project.

“We haven’t got the money for that film, but one day we will,” he said. “But I don’t think I’ll be going back to him. He’s too old now. That was a long time ago. It’s bad all around.”

On Friday, Lee said he will no longer wear Gucci or Prada until the brands hire some black designers following a pair of blackface fashion fails from the major Italian fashion houses.

Lee said on Instagram that “It’s Obvious To Da Peoples That They Don’t Have A Clue When It Comes To Racist, Blackface Hateful Imagery. WAKE UP.”

He said the brands needed to have black designers “To Be In Da Room When It Happen.”

I,Spike Lee Of Sound Mind And Body Will No Longer Wear Prada Or Gucci Until They Hire Some Black Designers " To Be In Da Room When It Happens". It's Obvious To Da Peoples That They Don't Have A Clue When It Comes To Racist, Blackface Hateful Imagery. WAKE UP. Ya-Dig? Sho-Nuff. And Dat's Da "Coonery And Buffoonery” Truth,Ruth.

His personal boycott in the midst of movie awards season was a powerful message to luxury fashion houses that are already suffering backlashes for designs evoking racist images.

Lee donned Gucci on the Venice Film Festival red carpet last September, following up with a stop by the Prada womenswear preview show in Milan later in the month decked out in a black Prada suit.

Gucci apologized for a high-neck black wool sweater that featured bright red lips when pulled over the face, while Prada apologized for a monkey bag charm resembling blackface in December. Both brands withdrew the offending pieces from sale on both websites and stores.

Prada said it “abhors all forms of racism,” while Gucci called it “a powerful learning moment for the Gucci team and beyond.”

The blackface images have particular resonance in the United States at a time when the governor of Virginia and his attorney general have been caught up in a scandal over blackface incidents from their college days in the 1980s. The offensive depictions are reminiscent of travelling minstrels from the 19th century, who would paint their faces black to portray African characters in a ridiculous and mocking fashion.

Blackface hasn’t been the only fashion faux pas in recent memory. Dolce & Gabbana faced a boycott in China — the luxury world’s No. 1 market by a long shot — after one of its designers insulted Chinese people in a private chat over promotional videos featuring a Chinese model struggling to eat Italian food with chopsticks, which was seen as culturally insensitive.