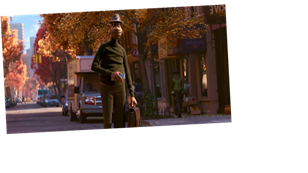 Disney and Pixar have released a new teaser for their heartwarming collaboration, Soul! The one-minute clip, which dropped on June 27, offers a brief sneak peek at the musical animation starring Jamie Foxx. Although it’s a quick snippet, the footage gives us a good idea of what to expect from the star-studded film.

Foxx plays Joe Gardner, a jazz musician in New York City who finally gets his big break, only to . . . fall down a manhole and into a coma. Kind of a bummer, no? But since this is Pixar, that’s not where his story ends! Instead, he wakes up as an adorable bluish, greenish blob (with glasses), and by chatting with the hilarious 22 (Tina Fey), he discovers that his soul has now been transported to a purgatory, of sorts, and he needs to learn more about himself before he can reunite with his body on earth.

Phylicia Rashad, Daveed Diggs, and Ahmir-Khalib Thompson (aka Questlove) round out the cast of Soul, which is codirected by Pete Docter and Kemp Powers. The film was originally expected to hit theaters on June 19, but the release date was pushed back to Nov. 20 due to coronavirus concerns. Watch the latest teaser above, then check out the other details we have about the film here!