LOS ANGELES — For a certain set of collectors, opening a private museum has become de rigueur. But Dean Valentine started a small art fair instead, with an eye to giving everyone a chance to discover new talent the way he does.

The fair, called Felix, was founded with the local art-dealing brothers Al and Mills Morán. It drew 40 dealers who offered their wares in a series of rooms and cabanas at the Hollywood Roosevelt Hotel (it was held Feb. 14-17, timed to be concurrent with the first edition of the Frieze Los Angeles fair).

“I learned a lot of what I know about art from hanging out with dealers in the mid-90s and asking them, ‘Why is this any good?’” said Mr. Valentine, the former president of Walt Disney Television and the former chief executive officer of UPN.

Mr. Valentine’s own rooms — in the rambling Hollywood Georgian-style home he shares with his wife, Amy Adelson, and their two children — display some of the recent fruits of 25 years of contemporary collecting. 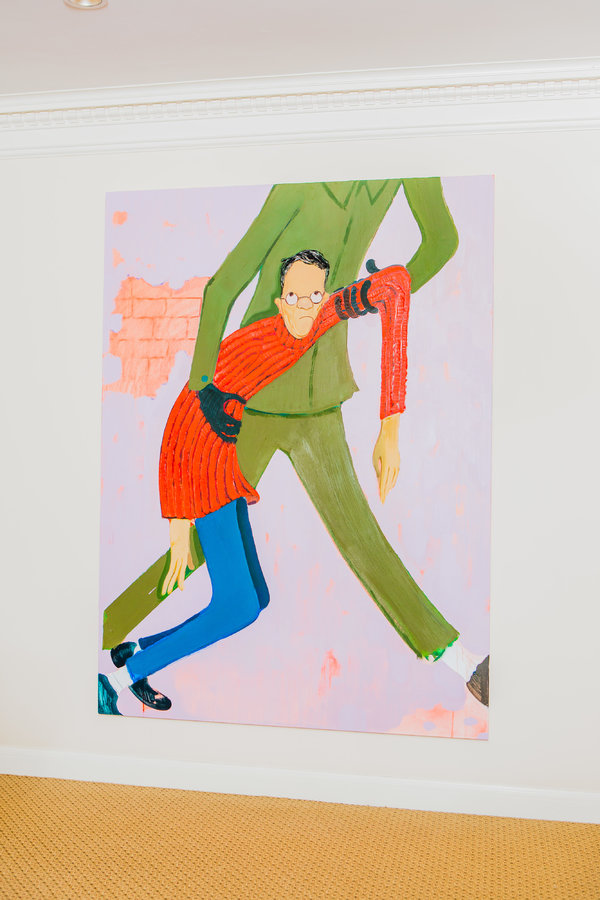 Most of the works were made in the last few years, like Joyce Pensato’s painting “Iceman Batman” (2016) and Sanya Kantarovsky’s oil “Lavender Arrest” (2015). Exceptions are a 1996 version of Andrea Zittel’s customized “A-Z Escape Vehicles,” a small metal trailer, and a couple of painted Greek vases dating to 500 B.C. that he bought at Sotheby’s.

“I respond to complexity,” Mr. Valentine said. But he also enjoys provocation: The master bedroom features a fanciful full-length Kurt Kauper painting of Cary Grant, nude, complete with tan lines, and standing by a roaring fire.

Ms. Adelson, a film and TV producer, lets her husband field the collecting duties. “He’s broken me down,” she said, smiling.

The couple has given away more than 600 artworks over the years, to the Whitney Museum of American Art, the Museum of Contemporary Art in Los Angeles and the Hammer Museum, among others.

“I’ve always thought it’d be really nice that, when I’m gone, my kids will be wandering through a museum and they’ll see, ‘The gift of Dean Valentine and Amy Adelson,’” he said. “I think that’ll be meaningful to them.”

The day after Felix opened, the couple talked about the origins of their collection. Here are edited excerpts from the conversation.

How did this get started?

DEAN VALENTINE It was 1994, before my father died. At one point he was at New York’s Sloan Kettering, and I was visiting him a lot. And at the time I was running Disney Television, and there’s that gap of a few hours where New York is up and buzzing, but everybody in L.A. is still having breakfast. So I’d walk around New York, and one day I wandered into an art gallery.

What did you find?

VALENTINE Works by Yuri Kuper, who did these beautiful, Cy Twombly-esque things on things on blackboards. For whatever reason, they spoke to me. That was the first acquisition.

Did your emotional state affect the purchase?

VALENTINE It changed my relationship to art, that it wasn’t this decorative thing, it was something that conveyed emotion and feeling. From what I have read, a mortality event almost always lies at the core of some collection mania. It certainly was in my case.

AMY ADELSON I will say, I have a vivid memory of one of the first pieces he brought home, on approval: A piece from Mihail Chemiakin’s Angels of Death series.

ADELSON I said to him, ‘I know you are coping with issues of mortality right now and you’re mourning the imminent loss of your father, but this is going to be really hard to live with. [Laughs] Do we have to manifest your mourning through this?’ We didn’t keep it.

Dean, did working for Disney inform your collecting at all?

VALENTINE I ran the Walt Disney network animation for a number of years, which was my favorite job there. And I love animation; I think I’m just inherently drawn to it since childhood. And being around animators and hanging out with artists, I think it deepened my connection to art.

So it wasn’t about Hollywood creativity generally?

VALENTINE Otherwise, no. I think everybody always assumes there’s this inherent connection between Hollywood and art collecting. And the truth is, most people here don’t collect. They don’t know anything about art; they don’t have any inclination for it.