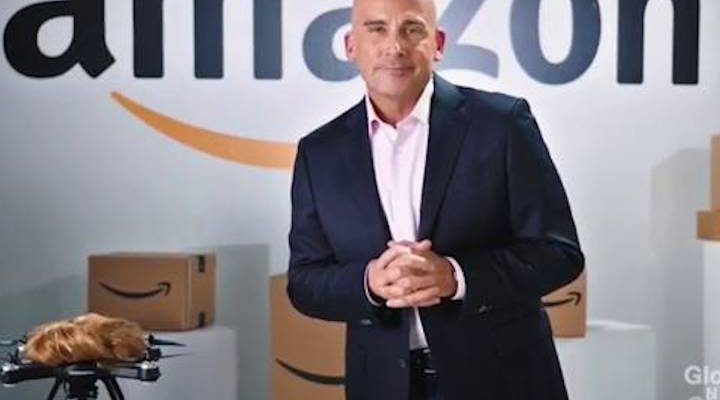 The fake advertisement begins with Bezos denying that Amazon was “trolling President Trump” by locating its new headquarters in Virginia and in Trump’s hometown of Queens, New York.

Bezos claims Amazon chose the new locations because they were “ideal for growing business” and not “to make Trump think about how I’m literally 100 times richer than he is.”

Bezos goes on to announce the new Amazon Caravan delivery option, which would see any package destined for “any Trump building” delivered by “hundreds of Honduran and Mexican immigrants.”

He adds that he’ll pick up the bill for any package delivered using this service, except Trump’s 1987 book Art of the Deal.

The Amazon founder then claims he is outfitting the company’s fleet of drones with human hair to make the machines appear more approachable.

“The style of the hair was completely random,” he says, standing next to a drone topped with a blonde toupee.

“I just wanted something that looked so silly that everybody knew it was fake and that the drone should just give up and shave its head like a real man would,” he adds.

Bezos goes on to say that he is purchasing a building that “used to be the crown jewel” of Trump’s father Fred Trump’s real estate empire and would be “converting it into public urinals.”

Finally, the business tycoon notes that the company’s headquarters in Virginia will be close to Arlington National Cemetery, so “we can pay our respects to fallen veterans, even when it’s raining outside.”

Donald Trump drew criticism last week after he cancelled his visit to a cemetery for American war dead near Paris because of the rain.

The sketch ends with Bezos declaring that Amazon’s future “is brighter than ever” thanks to Donald Trump.