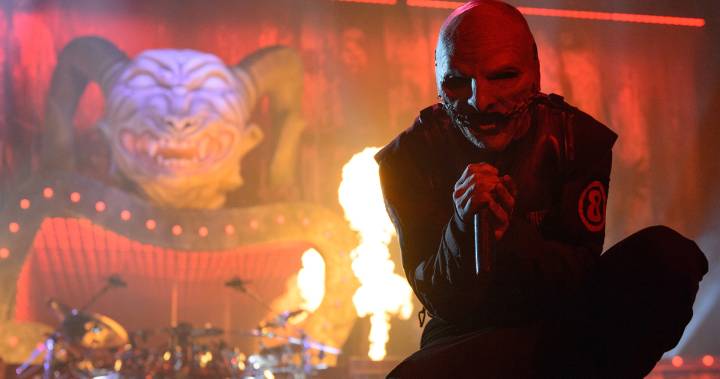 As well as a brand new album, Slipknot have just revealed plans for an extensive North American tour this summer, the ‘Knotfest Roadshow.’

The 29-date trek will take the Iowa-based metal outfit across the continent with Volbeat, Gojira and Behemoth; making possibly the heaviest all-star lineups of the year.

The ‘Knotfest Roadshow’ kicks off in Mountain View, Calif. on July 26, before concluding in the Woodlands, Texas on Sept. 8. The four heavy metal giants will make a pit-stop in Toronto for a sole Canadian show on Aug. 20.

According to the official press release, details regarding Slipknot’s upcoming album “will be revealed in the coming weeks.”

Longtime fans have been eagerly awaiting news on the nine piece’s sixth studio album for a number of years now. The last record, .5: The Gray Chapter was released in late 2014.

Slipknot was founded in 1995 and have sold more than 20-million albums worldwide. They have been nominated for 10 Grammy awards and won their first in 2006 for their metal anthem, Before I Forget.

They launched their own festival entitled ‘Knotfest’ in 2012. It has occurred annually ever since.

This time around, Knotfest will hit the road — and for the first time ever, allow many Canadian fans to easily access the world-renowned event.

In wake of the tour announcement, many longtime fans are hoping to hear new material from all four of the participating bands.

Danish rockers Volbeat became huge in North America in 2013. They are currently working on the follow-up to their critically acclaimed 2016 record Seal the Deal & Let’s Boogie.

Meanwhile, French death metal act Gojira has not released any new music since Magma (2015). It’s been heavily speculated that they are currently working in the studio while off the road.

Behemoth — the renowned Polish death metal band — just released their eleventh album, I Loved You at Your Darkest. Their European tour kicks off in March before joining Slipknot on the ‘Knotfest Roadshow’ this July.

Danish singer Michael Poulsen of Volbeat performs live on stage during Day 3 of the Greenfield Festival on June 9, 2018 in Interlaken, Switzerland.

“It’s kind of a cross between that and the first album. I keep telling people that this is what the kids from Iowa would have made if they’d matured,” Taylor said comparing it to Slipknot’s sophomore album, Iowa (2001), which is widely regarded as their heaviest.

“It’s going to be one of the darkest chapters in Slipknot’s history,” he said. “It’s dark, heavy, melodic, fierce and it’s real.”

It’s raw as hell and it’s going to address a lot of things that people are going to need in their life right now,” Taylor, 45, said vaguely hinting at the next album in the Apple Music interview.

Slipknot’s untitled and upcoming studio album is now slated for an Aug. 9 release. Each ‘Knotfest Roadshow’ ticket purchased will come with a digital copy of the long-awaited record.

Members of Slipknot’s fanclun, Outside the 9, will be sent an exclusive ticket presale code. Presale starts on March 5 at 10 .am.

** All Canadian dates are bolded **

*  — Slipknot and Gojira only