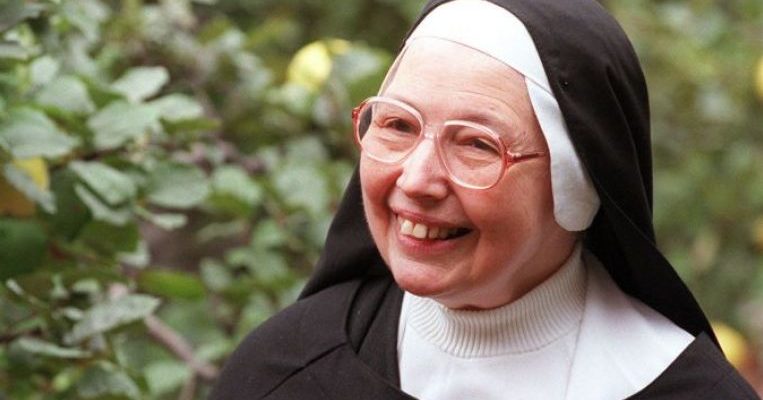 LONDON (NYTIMES) – Sister Wendy Beckett, a Roman Catholic nun who interrupted a cloistered life of prayer in England in 1991 and soared to international stardom with lyrical BBC documentaries that made her one of the most improbable art critics in television history, died onWednesday (Dec 26) in the village of East Harling, England. She was 88.

Her death was confirmed by the Carmelite Monastery in Quidenham, England, where she had lived in a trailer for decades, though not as a member of the Carmelite order.

Bending backwards in her black habit in the Vatican’s Sistine Chapel, gazing up through large eyeglasses at Michelangelo’s The Creation Of Adam, Sister Wendy spoke with a storyteller’s wonder at the solemn, sensuous moment on the ceiling as two fingertips near the touch that begat the creation of life.

“Adam’s sprawled there in his naked male glory, but he’s not alive,” she told viewers in 1996.

“All he can do is lift up a flaccid finger, and out of the clouds whirls down the God of Power. In his great flying cloak there’s a world. Whether that’s Eve or not, there’s a human face there looking straight at Adam with the eyes daring him to respond to the challenge. And God’s finger touches that of Man.”

It was a magical moment of television, too. Sister Wendy was small and stooped, with a plain face, buck teeth and a slight speech impediment that rendered R’s as W’s.

But her insightful, unscripted commentaries – a blend of history, criticism and observations on Leonardo da Vinci, van Gogh, Botticelli, Rembrandt, Monet and other Western masters – connected emotionally with millions in Britain and America.

By 1997, as she marked 50 years as a nun, the Oxford-educated Sister Wendy had made three television series, the most successful BBC arts programmes since Civilisation, art historian Kenneth Clark’s landmark 1969 documentaries.

She had also written 15 books on art and religion, and was a celebrity on both sides of the Atlantic, featured in articles and mobbed by fans.

She had acquired all the star trappings but a wardrobe adviser – a publicist, an agent to negotiate fees and contracts, promotional interviews with Charlie Rose and Bill Moyers, and visits with dignitaries like Prime Minister John Major at 10 Downing Street and Pope John Paul II, who commended her for broadcasting a positive image of the church.

For all her success, she remained a nun with commitments to prayer, solitude (when possible) and vows of poverty.

She assigned all her earnings to a Carmelite order that had sheltered her for decades, and she attended Mass daily, even when travelling.

Until she was 61, she had been a model of worldly renunciation: a hermit living in a windowless trailer on the grounds of the Carmelite Monastery in East Anglia, subsisting mainly on skim milk and rarely speaking to anyone.

She prayed seven hours a day and went out only to morning Mass or to a mobile library van for books.

In her passion for self-denial, she had not seen a movie since 1945, visited a museum or even seen a great painting, only reproductions in books.

Still, she was spellbound by art: She read about it voraciously, and began writing about it. Her first book, Contemporary Women Artists, was published in 1988.

In 1991, a BBC producer, Nicholas Rossiter, persuaded her to do a stand-up documentary about Britain’s National Gallery, talking about its paintings. It seemed to her a modest venture.

“There was no big ‘Should I give up the caravan to do television?’ or ‘Am I spoiling my hermit life?'” she recalled in her book Sister Wendy On Prayer (2006).

“I really didn’t think it was anything. I thought it was just a weekend here or there.”

She was a hit, a natural if eccentric personality with a gift for drama that made art accessible to the general public.

Following up in 1992, the BBC produced the six-part Sister Wendy’s Odyssey, with a wider focus on museums across England and Scotland. It drew 3.5 million viewers, and it secured her stardom.

She was ambivalent about celebrity. She liked “wonderful sweet people” who thanked her for helping them understand paintings, she told The New York Times in 1997. But, she added: “Nothing is more humiliating than being on television. You make such a fool of yourself.”

Some art critics agreed, calling her amateurish. But audiences were captivated by her richly human tales, which brought art to life. At the British Museum, standing beside a Greek wine jar painted 2,500 years ago, she embroidered the portrayal of Achilles slaying Penthesilea, the Amazon queen, at the fall of Troy.

“As he drove his spear through her throat,” she said, “their eyes met, and he saw how young she was and how lovely and brave. He fell in love – but he killed her.”

For a 10-part 1994 BBC series, Sister Wendy’s Grand Tour, she crossed Europe and for the first time swooned over Matisse and Cezanne at the Louvre in Paris, Michelangelo’s Pieta in Rome, the canvases of Rembrandt and van Gogh in Amsterdam, and the art treasures of Madrid, Florence, Venice and Berlin.

Her most ambitious series, Sister Wendy’s Story Of Painting, took her nearly 50,000km through Europe, the Middle East and the United States, to survey works ranging from prehistoric cave paintings in France to the masterpieces of Picasso and the pop art of Andy Warhol. Filmed in 100 days, the series was broadcast in Britain by the BBC in 1996 and in the United States by PBS in 1997.

Viewers were astonished and delighted, especially by some of her uninhibited expressions of rapture. Of a postcoital self-portrait by Sir Stanley Spencer with Patricia Preece, Sister Wendy confessed, “I love all those glistening strands of hair, and her pubic hair is so soft and fluffy.”

It was a sensation, widely quoted. Frank Bruni, in The Times, said, “The incongruity of such passionate and often sensuous statements coming from a hunched, bespectacled, 67-year-old nun is the secret to much of Sister Wendy’s charm and success.”

Wendy Mary Beckett was born in Johannesburg on Feb 25, 1930, to Aubrey and Dorothy (Sheehan) Beckett. Her father was a physician. She is survived by a brother, Wendell.

From an early age she intended to become a nun, and at 16 she joined the Sisters of Notre Dame de Namur, a teaching order, as Sister Michael of St Peter. She became Sister Wendy after Vatican reforms relaxed formalities.

She studied literature at Oxford in the early 1950s, living in a convent and observing its strict code of silence for four years. She graduated at the top of her class. Returning to South Africa, she taught for 15 years at a Cape Town convent and later lectured at Johannesburg’s University of Witwatersrand.

After suffering three grand mal seizures and learning that she had a form of epilepsy, she received Vatican consent to give up teaching for a life of solitude. In 1970, she returned to England and moved into the trailer at the Carmelite Monastery.

Sister Wendy eventually wrote some 25 books, including collections of poetry and meditations, and made a dozen documentaries, many released on DVD. She always returned to the austere seclusion that was her home for nearly a half-century, although her trailer was upgraded in 1994.

“The sisters worried about the lack of insulation, so they put up a small mobile home, which has a lavatory, bathroom and light fittings,” she told The Telegraph of London in 2010.

“I have an electric kettle, fridge, warming oven and night storage heater, so my life is as comfortable as it needs to be.”