Post-Modernist buildings, those teasing, colorful mash-ups of columns, pilasters and pediments, were both praised and reviled in the 1970s and ’80s, their heyday. But by the end of the ’80s they fell out of fashion, consigned with surprising abruptness to the dustbin of architectural history. In 1988, at the paradigm-shifting “Deconstructivist Architecture” show at the Museum of Modern Art, Michael Graves, one of America’s pre-eminent Post-Modernists, observed, “I’m toast.”

Or so it seemed. In the fickle turn of architecture’s style wheel, some of the complex architectural collages that once challenged Modernism’s cool, geometric simplicity are now enjoying a Lazarus moment, including works by Mr. Graves and Philip Johnson. Others, such as the 1996 addition to the Museum of Contemporary Art San Diego, in La Jolla, by the postmodern pioneers Robert Venturi and Denise Scott Brown, are facing demolition rather than resurrection.

Heading into their fourth and fifth decades, deep into midlife architectural crises, needing face-lifts, they’re now vulnerable and back again in the public eye, eliciting concern and attracting a second look — and sympathy — even from people who never liked them. But will these loved-hated structures be saved, and should they?

The 15-story Portland Building of 1982 by Graves, which recently tiptoed past demolition, exemplifies a generation of Post-Modernist buildings now working its way through a twilight zone of ambivalence. When first finished, Portland’s municipal services building was compared, unflatteringly, to a gift-wrapped box. Its facades were tiled or painted to represent classical fragments. Geometric garlands festooned the sides. A symbolic statue of a mythical Portlandia sporting a trident knelt below a Cyclopean keystone.

The over-the-top confabulation drove Modernists mad and made Post-Modernists exult: the style wars were on. Time magazine’s architecture critic, Wolf Von Eckardt, called the cartoonish building “dangerous,” an example of “pop surrealism,” while The New York Times critic, Paul Goldberger, declared it “the most important public building to open thus far in this decade.” 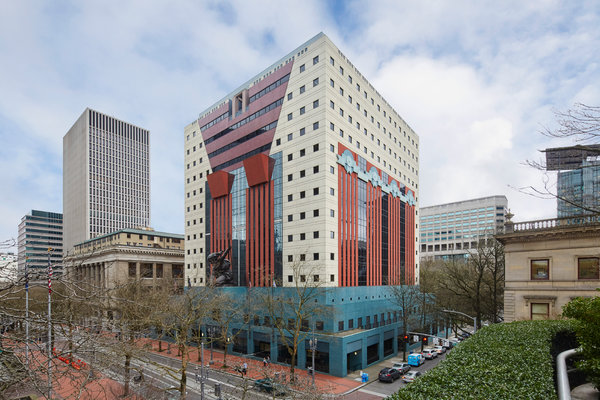 The notoriety never quite faded, and in 2009, the Portland office building climbed onto Travel & Leisure’s list of the “World’s Ugliest Buildings.” Still, the building was added to the National Register of Historic Places in 2011. By 2014, however, there was serious talk about demolition, especially given its water infiltration and seismic problems.

But when the cost estimators pulled out their calculators, they found it would take $300 million to demolish and replace the building, and $100 million less to reconstruct it. The city‘s cost-conscious solution was a respectful renovation, now underway, that is interpretatively restoring Post-Modernism’s first declarative monument.

Debates in Portland anticipated debates about preserving the movement’s progeny elsewhere. Back in 1984, two years after the Portland Building’s construction, New York’s perennial enfant terrible, the 78-year-old Philip Johnson — never one to miss a trend — and his partner, John Burgee, elevated Post-Modernism into the Manhattan skyline with their 37-story AT&T Building at 550 Madison. Johnson’s design, a cheeky, granite-clad Chippendale highboy, stirred controversy, a triumph of well-publicized notoriety that delighted the contrarian. But last year its new owners hired Snohetta, architects based in New York and Oslo, to update the stony bottom of the tower. The architects proposed suspending a filmy glass facade within a base gracefully lifted off the ground like a ballerina.

Some critics actually argued that the former AT&T building should not be treated as a sacred architectural cow and that renovation might have improved it. From London, Charles Jencks, Post-Modernism’s most vocal proponent and authority, noted in a recent email to The Times: “I am in favor of Snohetta post-modernizing the AT&T from a functional point of view — even Philip thought in 1994 it could be improved and shouldn’t be embalmed.”

But whatever their style, buildings in their fourth or fifth decade enter a witching hour. People begin taking them for granted; the eye no longer quite sees them. They start looking tired. A fresh coat of paint won’t do. They’re in limbo.

Their drift into vulnerability reverses, however, as they age further. The eye suddenly takes notice of buildings stranded by time, and looks at them with greater kindness. Curiosity and nostalgia set in. People sign petitions. They picket.

This cycle of praise, neglect and rediscovery is especially intense and problematic for Post-Modernist buildings because the feelings that raged about them during the style wars still rage: “Keep a few as an example of how a horrible, damaging movement set the design field back decades, maybe even a century, then level the rest,” commented Jim Sowell in the online architecture magazine Dezeen in 2014.

The irony of purposely ironic buildings that joked with history is that they are themselves verging on history, and history more than beauty is proving their strongest defense.

On Nov. 7, the Canadian Center for Architecture in Montreal opened a timely, wide-ranging survey and reinterpretation of Post-Modernism, “Architecture Itself and Other Postmodernist Myths,” curated by Sylvia Lavin, a Princeton University architectural historian. “At the 50-year mark, things shift from the present into history and sometimes into ruin,” she said in an interview. “A half century often triggers nostalgic mythologizing. I wanted instead to reflect on postmodernism’s historicist and populist roots and how that architecture impacts discussions about public building today.” She argued that the populist appeal of colorful, eclectic, crowd-pleasing Post-Modernist buildings was divisive rather than unifying.

One significant Post-Modernist building hasn’t won the preservation battle. Despite a petition signed by 100 prominent architects and academics, a forecourt of pergolas with chubby columns completed in 1996 by the Philadelphia architects Robert Venturi and Denise Scott Brown at the Museum of Contemporary Art San Diego is now being demolished for a major expansion by Annabelle Selldorf, the highly regarded New York architect. Inside, Ms. Selldorf is repurposing, intact, Venturi Scott Brown’s entry vestibule, with its Pop-art, WHAAM! VAROOM! neon starburst ceiling, as a meeting hall and event space.

It’s complicated. Venturi, who died this September, kicked off Post-Modernism with his hugely influential “Complexity and Contradiction in Architecture” (1966), a searing critique of Modernism’s failure to communicate and relate to its users.

Ms. Selldorf’s 43,000 square foot, $75 million expansion is the museum’s fourth and largest, each addition gobbling up the last like a Russian doll. But the core remains a crisp cubic house built for the philanthropist Ellen Browning Scripps in 1915 by Irving Gill, one of the world’s first Modernists. In a succession of additions over three decades, Mosher Drew, a San Diego firm, added gallery space and an auditorium, tying the composite of buildings together with a long colonnade. Venturi and Scott Brown removed the Mosher Drew colonnade in their expansion and painstakingly restored the Gill facade, which they then partially obscured by adding their pergolas for the museum’s entry and cafe.

Her clean-lined, geometrically disciplined buildings represent the Modernist architecture that Venturi famously criticized when he declared “Less is a bore.” As Ms. Selldorf removes the pergolas, she eliminates the complexity and contradiction Venturi Scott Brown layered into the ensemble, denaturing their eclectic addition. In a complex that otherwise remains a collage of architectural histories, the Minimalist chose to feature Gill’s early Minimalist icon. She subtracted rather than added.

In a case of competing histories, Ms. Selldorf had to make Sophie’s choice: which history? “The greater good was revealing the Irving Gill,” she decided.