Bijoyas Das, a former gymnast with a deep relationship to dance, is training U.C.L.A. team members to let their personality light up the mat. 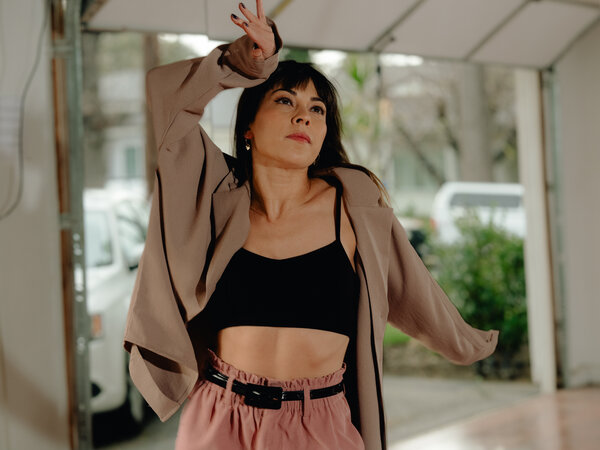 The Bruins gymnastics team of the University of California, Los Angeles, has more than one secret weapon. Yes, there’s Nia Dennis whose floor routine, an exuberant and powerful celebration of Black culture, went viral last week. But the team also has another rising star: the choreographer Bijoya Das.

B.J., as she is known, has been the volunteer assistant coach of the Bruins since 2019. A former gymnast, she also has a deep relationship to dance. A commercial dancer and choreographer living in Los Angeles since 2007, she has performed with Beyoncé, Pink, Usher, Avril Lavigne and others.

But she also loves it when dance is paired with something else, like wrestling — her choreography was featured in the second season of “Glow” — and especially gymnastics, where dance is part of the artistry portion of an athlete’s score, which also includes execution, technique and composition.

At the collegiate level, dance is an important component: It’s what knits a routine together and lets a gymnast’s personality light up the mat. As Das explained, the dance element is subjective and not usually an area where many deductions are taken. But it matters. At U.C.L.A., she is carrying on a strong dance tradition, following the path of the Bruins’ former head coach, Valorie Kondos Field, who, Das said, “came in to U.C.L.A. as a ballet dancer and a choreographer, knowing nothing about gymnastics.”

She made the team dance, just as Das does now with her enthralling floor routines, including two viral performances by Dennis. The first, last season, was set to a Beyoncé medley. This year’s, inspired by the Black Lives Matter movement and the protests of last summer, includes Kendrick Lamar’s “Humble.”; Missy Elliott’s “Pass That Dutch”; and Monica featuring Dem Franchize Boyz’s “Everytime tha Beat Drop,” which happens to be one of Dennis’s favorite TikToks.

During the floor routine’s 90 seconds, Dennis sails through tumbling passes — all the more impressive because she had shoulder surgery in June — weaving dance throughout. She begins on a serious note by taking a knee, raising a fist in the air and rising to make the Wakanda Forever salute. “Then she kind of hits a little Nae Nae and a Woah,” Das said, referring to TikTok moves. “It’s iconic new age hip-hop. She just loves to dance like that so we thought it would be fun.”

Electrifying last year, Dennis has become even more fluid in combining dance and gymnastics. The seamless routine includes moments from TikTok dances, as well as some stepping, the percussive tradition found at Black fraternities and sororities. It was inspired by Dennis's father, who helped by sending tutorials.

One of the most delightful moments comes when Das, in a cameo, faces Dennis and dances with her. They had just changed the timing of how Dennis would get out of a tumbling pass, and she was nervous about missing it.

“We all kind of do the routines on the sidelines anyway,” Das said. “Now I feel like every meet for the season, I’m going to stand there and do that with her. It’s like our thing now.”

Dennis, who said she finds movement a form of freedom, is inspired by Das. “I’m trying to be like her, trying to move like her,” she said in an interview. “She definitely knows how to choreograph to each individual. That’s so difficult to do. Not everybody can dance the same. Not everybody can really dance, you know?”

Dennis’s performances are not the only ones by U.C.L.A. athletes that have gone viral; in 2016, it was Sophina DeJesus; in 2019, Katelyn Ohashi. This is a team of individuals. Look for Margzetta Frazier — another incredible gymnast-dancer who will be debuting a new Das routine soon — and Chae Campbell, who is poised, luminous and just a freshman.

Das is proud of them all. She started in gymnastics at the age of 6 and continued through her sophomore year of college at the University of Washington when an Achilles tear forced her to stop. “It was a sudden end to my career that I definitely didn’t want,” she said.

After her recovery, she told herself that if she couldn’t be a gymnast, she would become a dancer, something she always loved. “I started taking dance classes in Seattle and I really fell in love with hip-hop,” she said. “I also took jazz funk. It was so fun for me to find joy in something.”

And she’s continuing to find joy in dance, even during the pandemic. Das, who created the movement for the new video of the Sam Feldt-Kesha collaboration “Stronger” — it’s about finding strength through difficult times and includes a fight sequence — also choreographed the Bruins’ intro video this season, another celebration of gymnastics and dance.

Recently, Das spoke about her approach with the Bruins, how her commercial career has influenced her choreography, and the sensational Dennis — who, by the way, hasn’t made up her mind about training for the Olympics.

What follows are edited excerpts from that conversation. 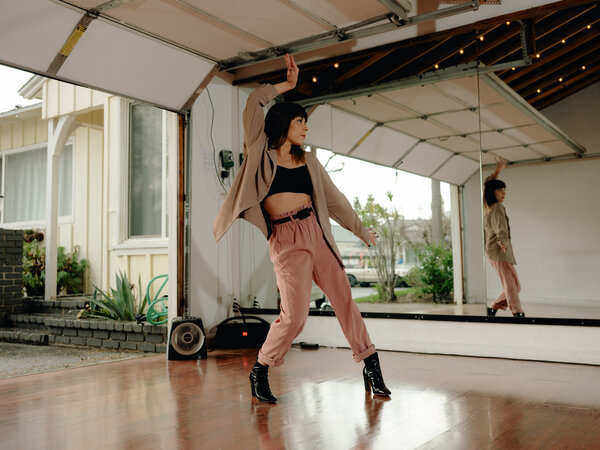 Do you want to change gymnastics?

I always think of it in a smaller way: How I can change each athlete for the better and how I can change the program for the better? But in seeing how Nia’s routine has impacted people, I realized that maybe there’s a bigger purpose for me with all of this and it’s beyond getting good scores and putting cool moves out there.

It’s more about inspiring people to reach their full potential or go after their dreams or try something they thought they couldn’t do because of their skin color or because they didn’t fit the mold.

How do you work with the gymnasts?

They’ve all had a really rough year. I just want the routines to bring them joy and to make them happy. This year wasn’t really about pleasing people or doing what the judges or the gymnastics critics would like. It was more about, what would make you feel good as an athlete?

On our team we do Studio Mondays where I’ll teach a dance class. To have some type of dance training helps with their coordination and their balance and working through their feet.

I feel like Nia’s really taken that training seriously. I think last year she was more kind of playing a character. It worked and it was a blast to watch. This year, I feel she’s playing herself: How she is on the floor is how she is in life.

How does your commercial dance experience come into gymnastics?

One thing that I’m really big on is musicality and timing. We don’t just aimlessly hit poses and dance moves and move through the music. We’re actually hitting accents and beats, and I want the timing to look good. I’m on a lot of them about that.

Your title confuses me. Are you really a volunteer?

Yes. In the N.C.A.A., there are a ton of different rules. And one of the rules in gymnastics is that you’re only allowed to have three paid coaches on staff. A lot of times the volunteer coach ends up being the choreographer.

You know how dancers are: You just follow your heart because you loved to do it, and then you end up making bad business decisions along the way.

How do you find a balance between dance and the technical skills in a routine?

There are certain requirements that they have to have in college gymnastics and it’s usually two or three tumbling passes depending on how difficult they are. And then they have to fulfill a leap requirement. Anything else is dance and artistry. I choreograph the in betweens and make it fun to watch.

Do gymnasts in the collegiate level have more freedom in terms of dance than those in international competition?

So international competition is just more boring to me?

[Laughs] Those international gymnasts have to do more tricks. There’s just less time for performance, and less energy can be expended on it. But it’s also the culture of elite gymnastics. If you notice, a lot of them don’t smile; they’re not really performing. They’re kind of just doing these in-between moves and poses.

There are some international elites that are extremely artistic on the floor, but the culture is usually a little more classical and maybe ballet based. So you’re not going to really see people doing the Woah in their elite floor routine — as much as it would be really fun for somebody to just shake it up.