In 1990, the choreographer Paul Taylor sent “pseudo death-threats” (his darkly teasing term) — each one a work of art — to five of New York’s foremost dance critics. The one that Deborah Jowitt received was a striking text collage: “Who saw her die? ‘I,’ said the fly, ‘with my little eye, I saw her die.’ Anon.”

Ms. Jowitt, 85, still has it hanging on her wall. She showed it to me recently when I visited the Greenwich Village apartment that she and her husband have lived in since 1969. It hangs alongside vintage posters of 19th-century Romantic ballet, of Twyla Tharp, and of the radical 1970s improvisatory group Grand Union.

Ms. Jowitt, who has been reviewing since 1964, has probably vexed fewer choreographers than most other leading critics. She speaks of Taylor tenderly (“a genius”), and with gratitude. As the subject of her first review for The Village Voice (Nov. 9, 1967), he immediately wrote her with advice: She should have more confidence in her own views and not quote a senior critic to prop herself up.

The letter ends: “If you believe I have ‘sold out’ then you must say so. If you think I would trade fine work for ‘success’ you are just plain crazy and I will spank you the next time I see you. All best wishes to you and your typewriter from me and mine, Paul.”

Originally from California, Ms. Jowitt came to New York as a dancer and soon became a choreographer too. She has lived through great days for this city’s dance; she helped to create a golden era for its dance criticism. 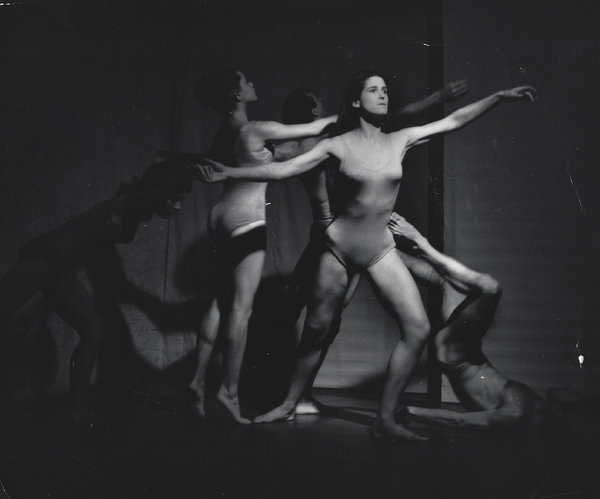 From 1967 to 2011, she wrote a weekly column for the Voice that won her regard far beyond this city. As a writer she was — and remains — generous in her scrutiny of the new, open-minded in her embrace of any and every dance form, and an exemplar of a descriptive form of writing both searching and evocative. As for right now, “There just are too few people writing about dance these days,” she says.

This month the 14th Street Y honors her with a series of performances (March 21 to 24) titled a Deborah Jowitt Celebration. A wide range of New York dance artists will perform; a selection of old photographs of Ms. Jowitt will be shown.

The apartment is full of memories. She shows me the armchair where Ms. Tharp sat during an early-1970s interview, wryly watching Ms. Jowitt’s young son as he kept pushing a cup toward the edge of a table. In such a home, it’s natural for Ms. Jowitt to speak of her many dance enthusiasms, from the witty audacity of the postmodern experimentalists to the humanity of the 19th-century choreographer August Bournonville.

These are edited excerpts from our wide-ranging discussion.

You still write each week — a dance column for Arts Journal. What keeps you working?

Writing about dance is something that I’ve become addicted to. It’s like the wine I like to have with dinner. If I don’t have it, I miss it.

How do you handle evaluating new choreography?

I try to feel like I’m open. My job is to see what it is. Obviously whether I’m elated or discouraged comes in — but I try not to deal with that while I’m seeing it — unless I see trouble, like something out of character.

I’m trying to immerse myself. If a thought like “Oh my God, it’s not as good as the piece he made last year” comes into my mind, that’s O.K. — but put it on one side. What my job is to see what the work is, or seems to be, saying. It’s a process.

You started out wanting to be an actor —

That was my idea. It changed because I spent part of a year in London. I studied with Eileen Thorndike [Sybil Thorndike’s sister]: She liked my Juliet! But I didn’t know how to manage a career. I was too tall, or I was American; and my parents didn’t realize how little I knew.

And then a letter came from New York: Would I like to join this modern-dance company, run by Harriette Ann Gray? So I fell into dance because it was a last resort!

Your dance career brought you into contact with some of the framers of American modern dance. Am I right that you danced at Jacob’s Pillow on the same program as “Miss Ruth” — the high-prestige modern-dance pioneer Ruth St. Denis?

Yes, in 1959 (I was Demeter in a piece by Pearl Lang) — and Alvin Ailey was on the program too. Before that, I took dance-composition class with Louis Horst [the influential musician, critic and choreographic theorist]. I did what I thought was the assignment, and then I ran around ecstatically in a circle. Louis, who never got up from the piano, just said “What was all that ‘Diana on the misty mountaintops’”? [laughing]

How did writing enter your life?

Criticism began for me — while I was dancing and choreographing — with a radio program, “The Critical People,” for WBAI listener-sponsored radio, probably in 1964. Until then, I had only gone to see the dance that I thought I might like; and I didn’t have a lot of money. We had a trick for getting into the City Center and seeing the New York City Ballet without paying. And I really didn’t see that much.

But suddenly my responsibility was to go see something that otherwise I might not have seen. I was just getting an education while I was reviewing.

At The Village Voice, were you encouraged to concentrate on small-scale new works, on big-league ballet, on the whole spread or what?

Nobody encouraged me to do anything! But Diane Fisher, who was the arts editor, after my first two pieces, said one thing: “Isn’t dance about movement?” “Yes.” “Well, why don’t you write about that?”

The next piece I wrote, I tried to say what the movement quality was. And Diane said “Fine. Keep going. That’s it.”

And so that descriptive vein came to you early?

I think that [the dance critic] Marcia Siegel and I, who were best friends, felt the same way. We wanted to bring whatever it was into life in some way. We didn’t want just to sit there and say, “This was bad, this was good.” And eventually a kind of style — a personal style — developed.

Sometimes it’s so hard to describe that I almost give up. The last review I wrote — I can’t believe they did this, but … A man got down on his knees, with his knees apart, and his feet flexed. And a woman stood on his heels. And he crawled with her, upright, and she was upright on his heels. And, right in the middle of trying to describe this, you think, “Maybe I just won’t bother!”

You prefer to evoke than to evaluate?

Yes, but there’s a kind of description I don’t like: “She stepped onto her right leg and raised her left leg 90 degrees to the side. Then she switched her —”

What of the opposite extreme in criticism, the rush to unjustified judgment?

I remember there was a really great Kabuki performance in New York. And somebody reviewed it in a sort of tired “I suppose it’s all very well if you like masks and things like that.” Really an ugly review. I didn’t want to be that kind of person or think that way about what I was seeing.

Which choreographers or dance people most stretched your mind?

Trisha Brown, for one. Even when she was stumped, she was brilliant. And her mind just worked in different ways that I found so exciting and so admirable. Her mature work seemed just as delectable as her early pieces that I loved, like when she attached a rope to herself and walked down a pillar. Who else would do things like that?

What was the adventure of following the experimental work that began in the 1960s?

The experimental people got me thinking about what is dance. When does it stop being dance? Or does it ever stop being dance? I just assumed, if people said it was dance, it was. So I would say that the dance educated me.