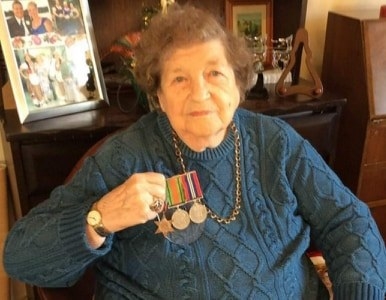 People around the world are remembering family and friends who have died during the coronavirus pandemic. BuzzFeed News is proud to bring you some of their stories. To support our coverage, become a member and sign up for our newsletter, Outbreak Today.

Wendy Bishop was the first person to die of the coronavirus in the small town where she lived in the Scottish Highlands. She was 97 years old, and had lived an extraordinary life: serving as a medic during the Second World War, raising six children, and later opening a hospital for injured dolls and teddy bears where she repaired toys sent to her from around the world.

Now, Bishop will finally be laid to rest alongside her wartime sweetheart, who was killed in battle in his early 20s, almost 80 years ago.

Wendy Beatrice Austin Bishop, one of three siblings, was born in Northfleet in Kent, in the southeast of England in 1923. She left school at 15 and went to work at a local kennels.

Soon after, the Second World War broke out, and she was evacuated to Hampshire, but at the age of 17, she enlisted in the Women’s Auxiliary Air Force as a medic, and served from 1941 to 1945. 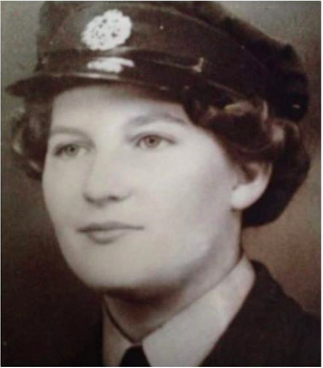 A picture of Wendy Bishop taken during the Second World War.

She was stationed at RAF Oban in Scotland, and met her first boyfriend, Roy Stephens. He died at the age of just 20 on his first mission with the Royal Air Force, so they never got to live out their future together.

Almost 80 years later, his relatives are still in touch with Bishop’s family, and her ashes will be buried alongside her first love in Golders Green crematorium, north London.

“She totally loved him,” her granddaughter Johanna Bishop said. “And of course, when he was killed, my nan met my granddad and they had six children.”

After the war Bishop moved back to England, to Hampshire, where she married and had her children, and later relocated to Bournemouth, where she first opened a shop.

Bishop was an adventurous woman, and after her marriage broke down in the 1970s she just decided to start again, hundreds of miles further north. She lived out the rest of her life in Scotland. 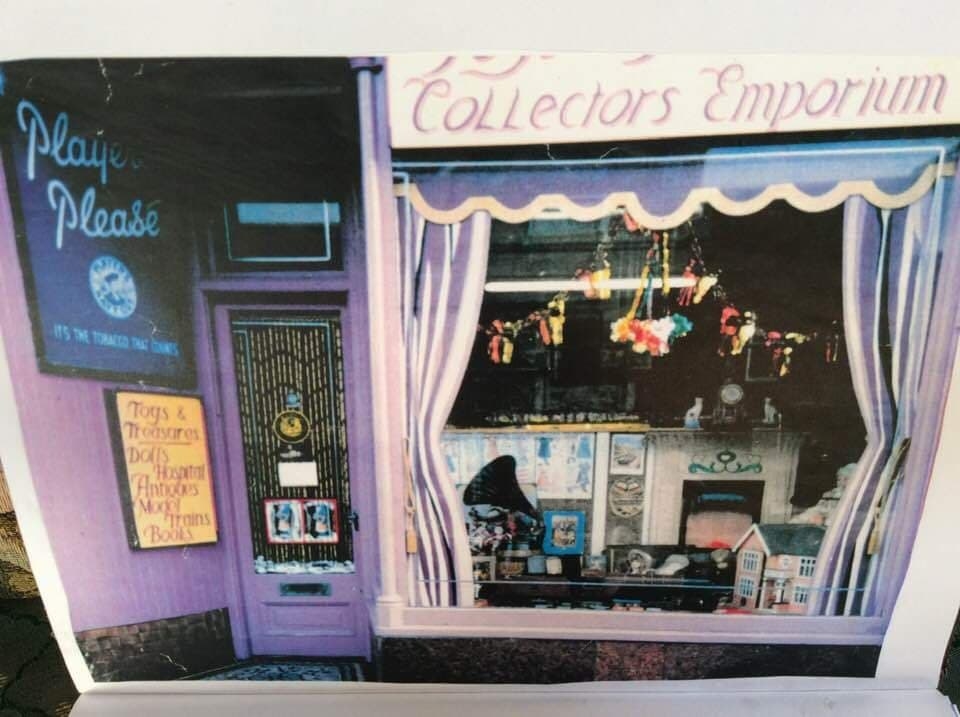 First she moved to Aviemore in the Scottish Highlands, and then on to Grantown-on-Spey, where she opened her “hospital” — Toys and Treasures — in the high street.

Bishop also loved to write — she wrote letters and poetry, and she kept diaries. After she died, Johanna found her grandmother’s memoirs, “pages and pages and pages” of her life story, that her family hadn’t even known she was writing. They are now considering getting trying to get them published.

“She always liked fairies and things, and I think the Highlands to her was probably magical, with the heather on the hills and things like that, she was so creative and made a lot of things, she just loved it up here,” Johanna said.

Bishop started her toy repair business from home, but she had so much work from all over the world that she decided to open a shop. She would fix up beloved dolls and teddy bears and send them back to their owners dressed in little hats and coats. Her hospital received visitors from all over the world, including Princess Diana’s mother, Frances Shand Kydd.

“She thought because she had so much going on at home that she should open a shop,” Johanna said, “because she had dolls and teddies sent from everywhere.”

“I’d pop in the shop just to see what other exciting things that she’d received,” she added. “It was just extraordinary.” 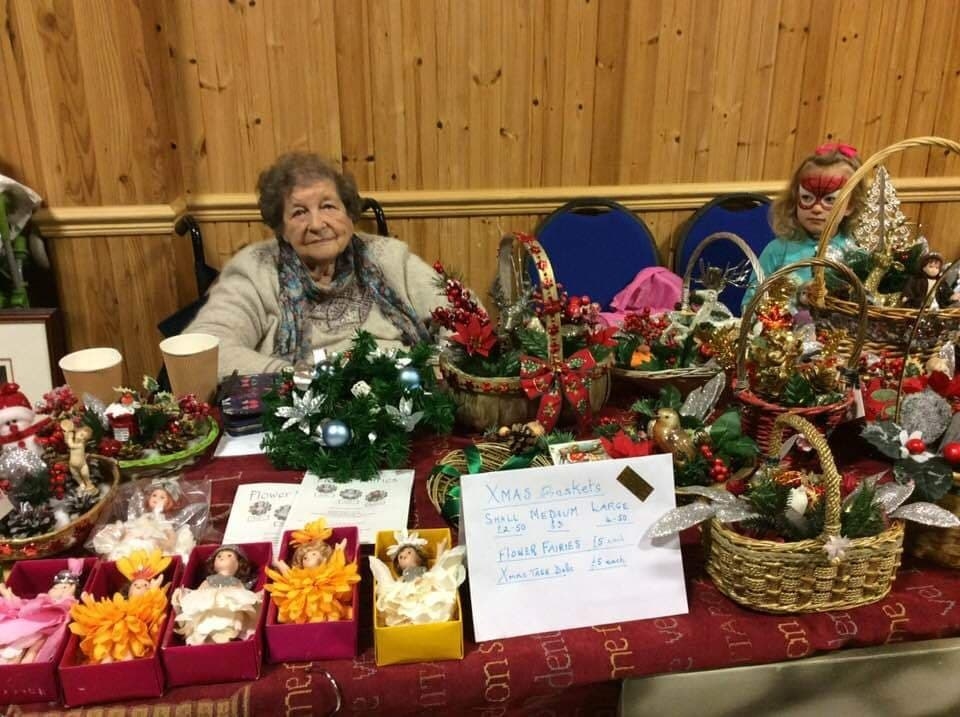 Wendy Bishop at a Christmas fair.

Johanna, who spent her early years in Bournemouth before moving up to Scotland, where she now lives, fondly remembers her summer holidays with her gran in the Highlands.

Bishop would travel down to the south coast of England to collect Johanna and her sister Lisa, and then they would take the long coach journey back up to Scotland together, where they would spend their whole summers.

“I could go on all day about the things she did,” Johanna said. “She took me up the Cairngorms, up the lift. I mean years ago, it was bloody dangerous. I was terrified. I remember I had little red wellies on and being absolutely terrified.” 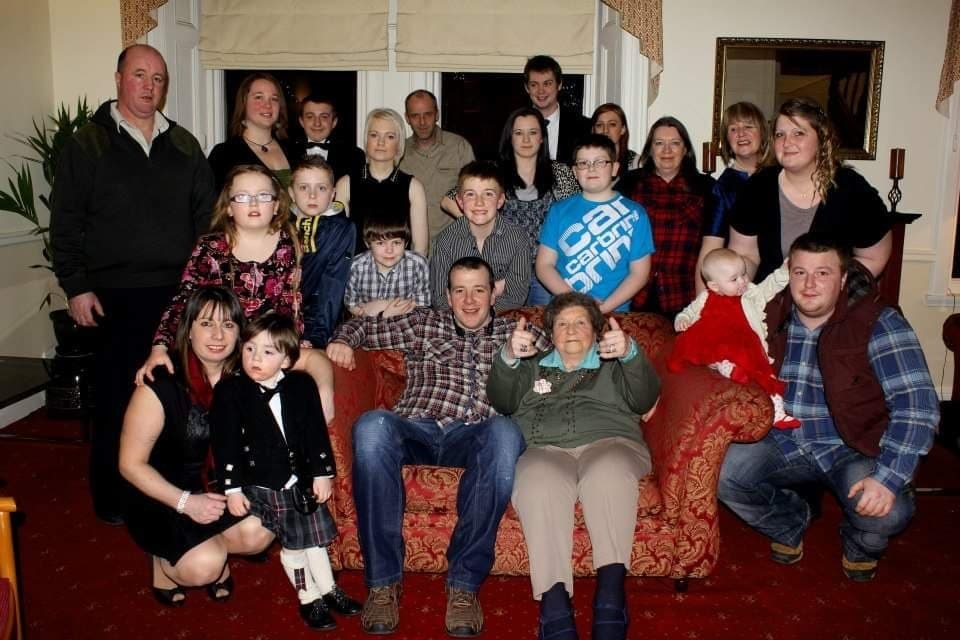 Wendy Bishop with her family. 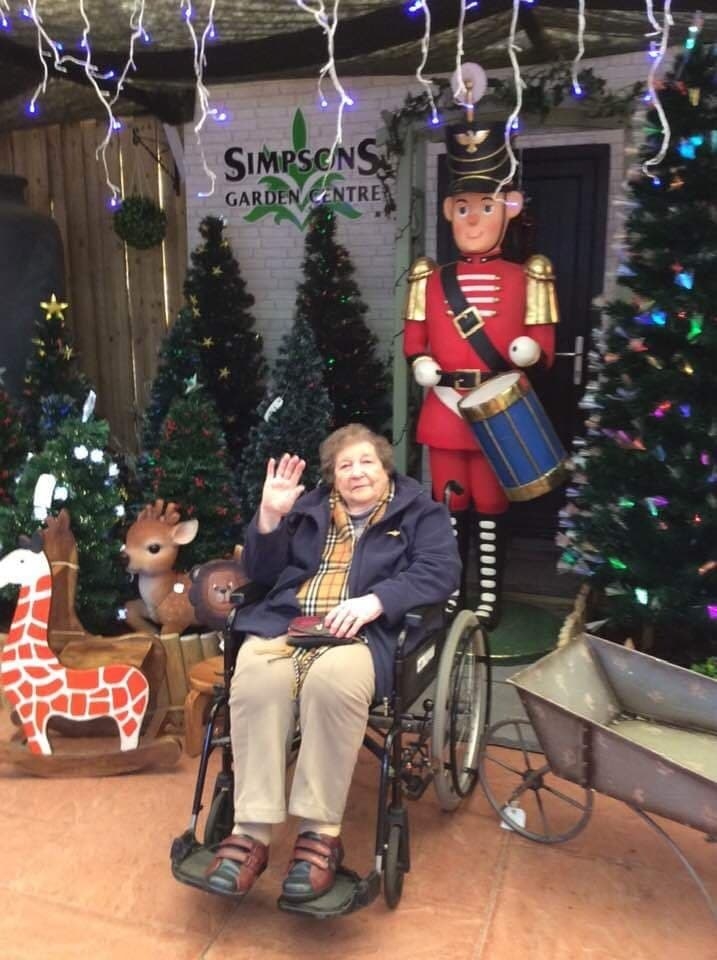 “We had the best holidays,” Johanna said. “When I was a child, not many of my friends went on holiday, or went anywhere, but we’d say ‘oh, we’re going to Scotland,’ and I just remember feeling lucky and… different, because my nan came and took us away to this wonderful place.”

Bishop also loved to party. She loved Christmas, and she loved having all of the family round to her house for a big knees-up. In her later years she also liked going to the shops on a Sunday, and loved going to the garden centre — where she’d often catch up with friends.

“She’d always stop and speak to somebody,” Johanna said, “and when she got talking to somebody you knew you were there for about two hours, because people were so interested to talk to her.”

She was also very generous, and supported people living in poverty in Nepal right up until she died — charity work that her descendents have vowed to continue in her memory.

“You had to watch what you said to my nan,” Johanna said. “If you said you liked something she would give it to you. She was so, so kind, very generous, very generous.” 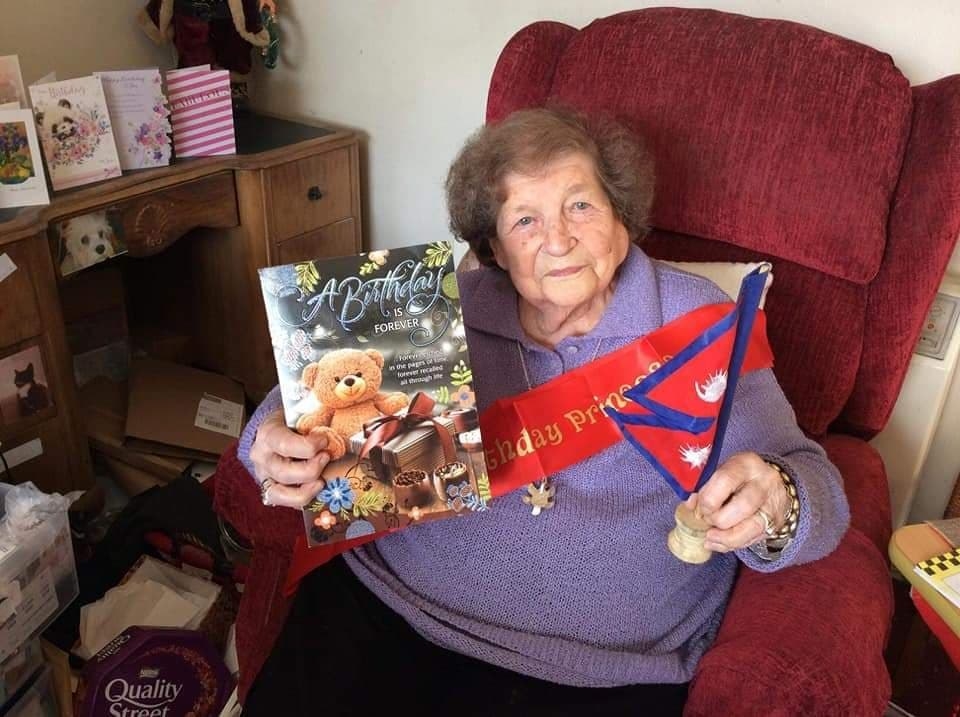 Bishop was also famous among her family for her Easter bonnets, which she would make for all of her descendents right up until the year before she died — and she wasn’t just a grandmother but a great-grandmother and a great-great-grandmother. And she managed to keep up with them all by being active on Facebook.

But she did not get to meet the family’s newest arrivals before she died, her great-great-granddaughters Lorena and Freya. 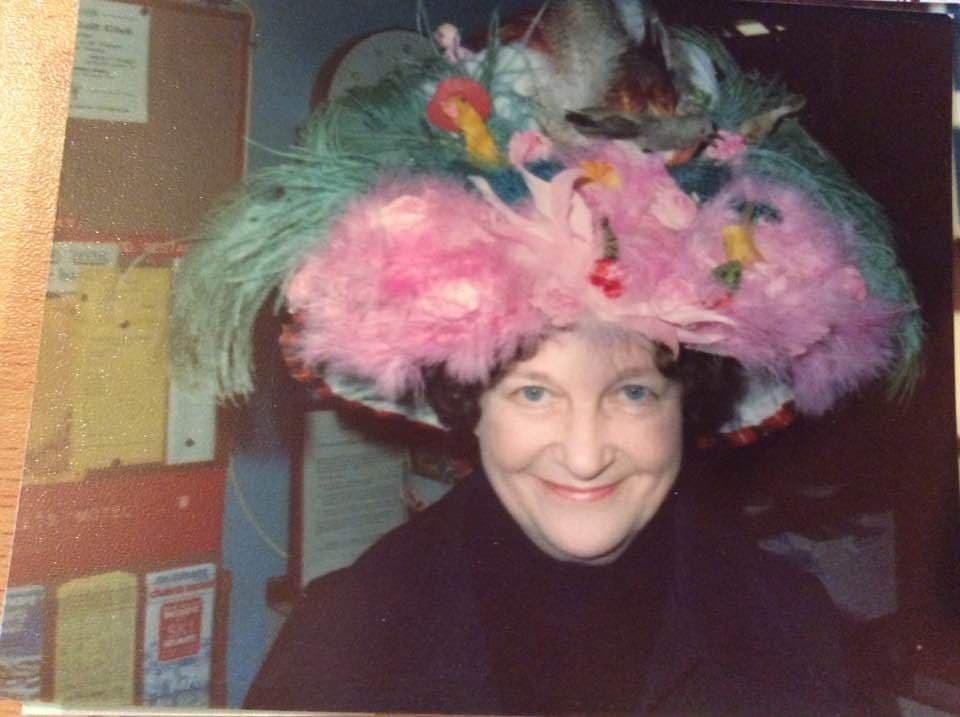 Wendy Bishop in the 1980s with her homemade Easter bonnet.

Freya’s parents — Johanna’s son and his partner — were given a gift of a toy elephant for Freya, who was born on Monday. They named the elephant Wendy.

“I don’t want to ever forget my nan, because she wasn’t just a normal granny,” Johanna said. “She was something different.”

Bishop died on April 18 at Raigmore Hospital in Inverness. She had tested positive for COVID-19.

She was a well-known character in Grantown-on-Spey, and on the day of her funeral, local residents lined up to pay their respects. 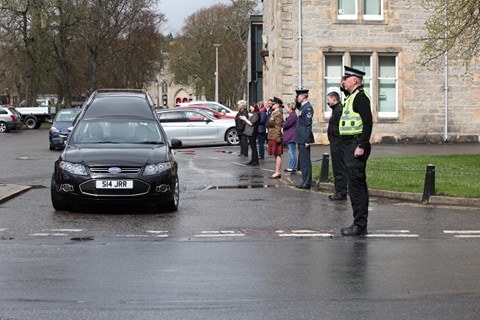 The Guard of Honour in Grantown-on-Spey.

In her final hours in hospital, Johanna and her aunt were allowed onto the ward to see Bishop for one last time. They stayed for two hours, and as her beloved grandmother drank a cup of tea, Johanna told her not to worry about the family, and even told her a little white lie to put her mind at ease — that baby Freya had arrived safely already and that she and her parents were doing well.

“She really enjoyed that cup of tea and I thought that I’m going to hold onto that memory,” Johanna said.

“These are memories that we’re going to cherish now because it was just nice to be able to say goodbye.”● 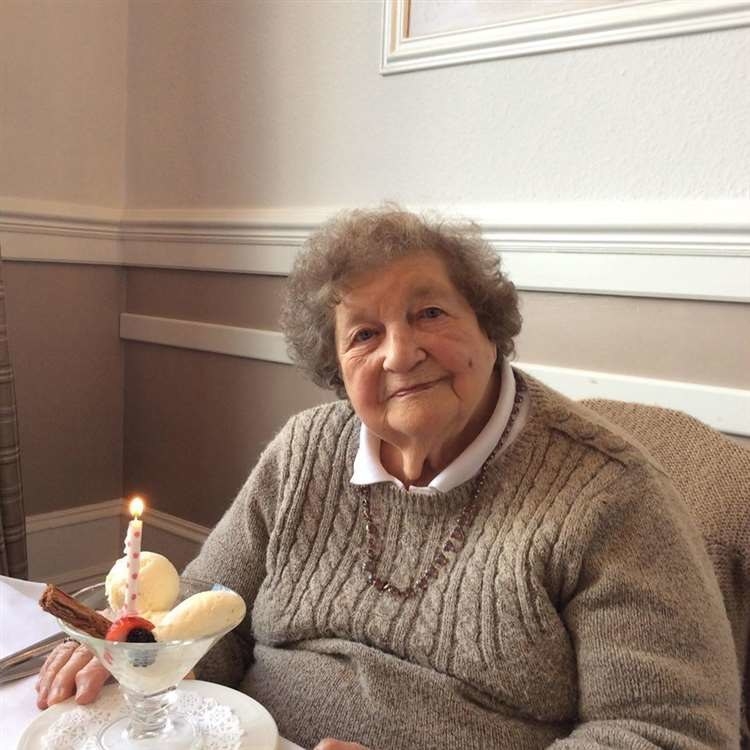