When Jussie Smollett reported he had been assaulted while walking in downtown Chicago, the outpouring of support was immediate and expansive. Hollywood stars, advocacy groups like GLAAD and presidential candidates expressed outrage at the incident and warmth toward Mr. Smollett. But Thursday, in the wake of his arrest, numerous public figures, some of whom had started out in his corner, returned to social media or spoke out elsewhere to give voice to their evolving sentiments on the matter.

President Trump, who last week called the reported attack “horrible” when a reporter asked him about it in the Oval Office, tweeted a completely different response after Mr. Smollett was charged Wednesday with having filed a false police report.

[email protected] – what about MAGA and the tens of millions of people you insulted with your racist and dangerous comments!? #MAGA

The actor and comedian Patton Oswalt criticized Mr. Smollett on Thursday for providing President Trump with what he called a “‘Get Out Of Race-Baiting Free’ card.” His tweet began, “Way to go Jussie.”

Rahm Emanuel, the mayor of Chicago, thanked those who helped in the investigation that led to the charge against Mr. Smollett.

The actress Yvette Nicole Brown tweeted a message of love to Mr. Smollett and his family and reminded followers that “believing victims is always the right choice.”

[Read about the latest developments in the case.]

Robin Roberts, who conducted the first interview with Mr. Smollett after the reported attack, said on ABC’s “Good Morning America” on Thursday that the developments were “a setback for race relations,” among other things. “I cannot think of another case where there’s anger on so many sides, and you can understand why there would be,” she added.

The filmmaker Tyler Perry said on Facebook that he had spoken to Mr. Smollett, who was insistent that he is telling the truth about the attack. 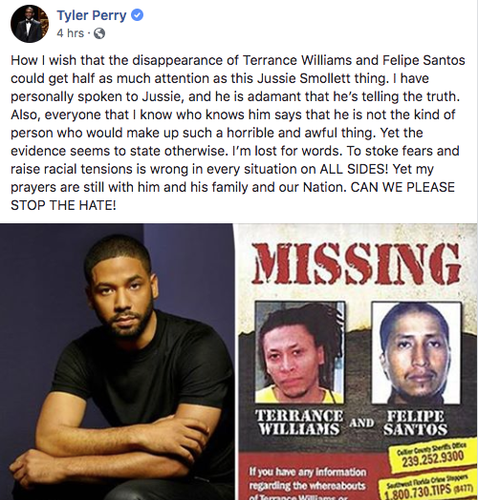