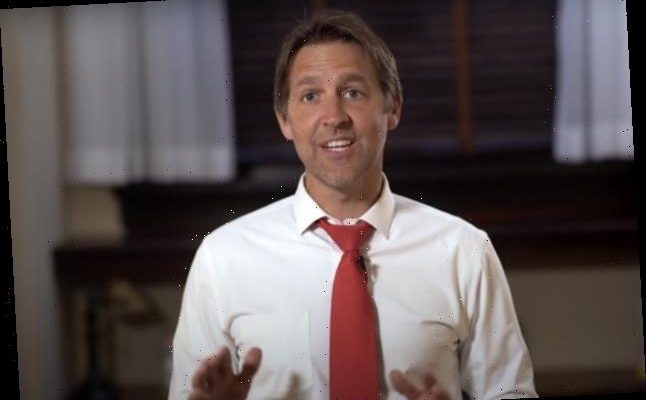 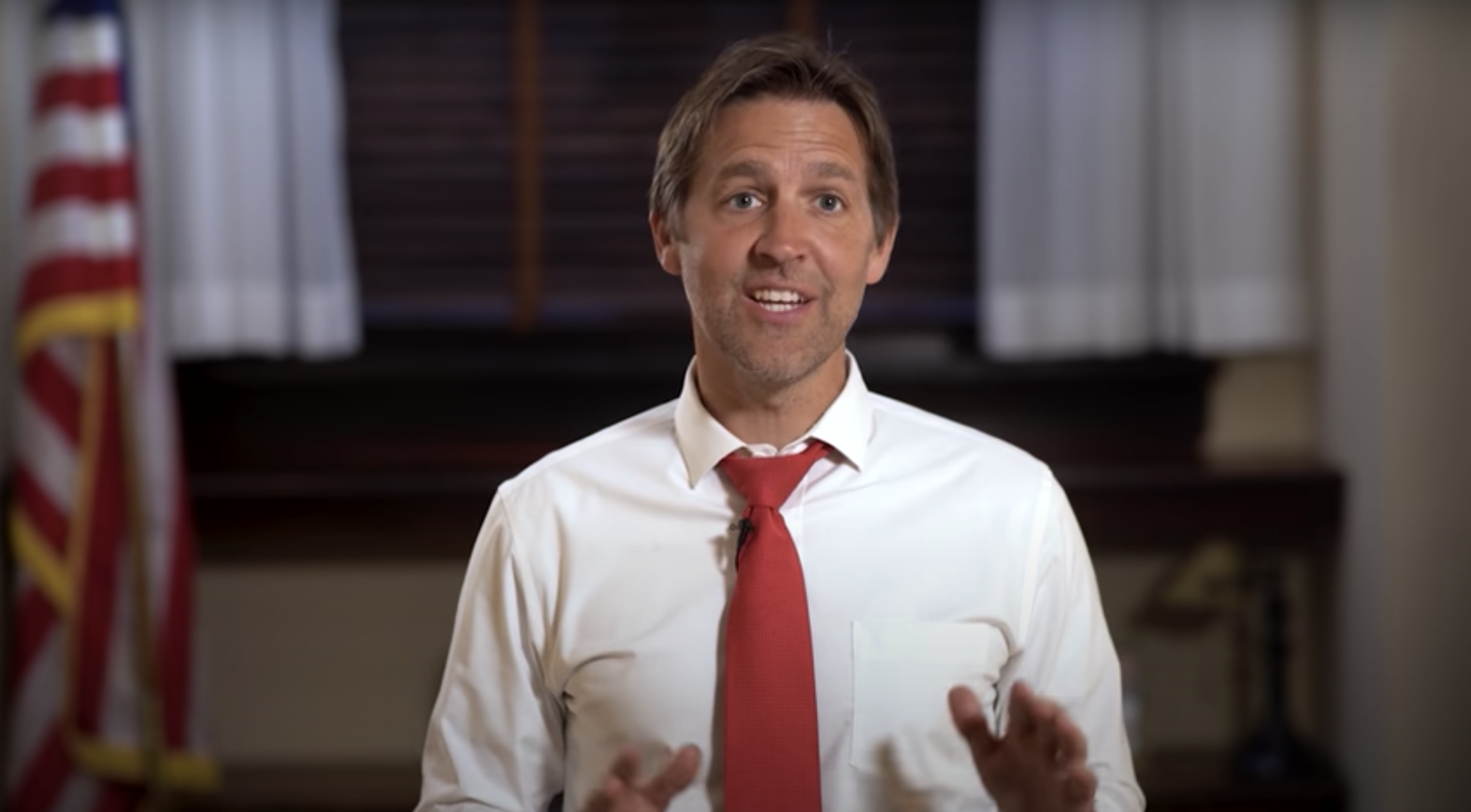 Nebraska senator Ben Sasse’s attempt at a stand-up routine during an online commencement speech to high school graduates drew criticism over the weekend, with some dubbing it, “the worst graduation speech of all time.”

In a taped speech to Fremont High School graduates on May 16, the Republican senator joked about students’ fitness, ridiculed psychologists, and blamed “the thugs in China” for the coronavirus pandemic.

The speech prompted a Fremont school board member to demand an apology from Sasse for his “despicable” comments. The school district also distanced itself from the senator’s comments, saying in a statement, “The words spoken belong to the individual that said them, not the school district.”

Sasse’s spokesperson blamed “politically addicted folks” for complaining about his speech and said that the graduates were not “fragile” to hear the truth about China’s role in the pandemic.

During his speech, Sasse took shots at China several times. He sarcastically thanked China for creating a situation where parents were forced to become teachers as schools were closed due to the pandemic.

He said that at future reunions, 2020 graduates would recall their senior year as “that time when China started a big global pandemic that created the worst public health crisis in over a century and brought the economy to its knees and we had to stay home and everybody was hoarding toilet paper.”

Sasse later said Nebraskans and Americans had the “grit” to “beat the virus,” bring back the economy, and have a “serious reckoning with the thugs in China who let this mess spiral out of control by lying about it.”

Sasse, a 1990 Fremont High graduate, said that the students were not “missing out on that much” by not having a graduation ceremony because “nobody remembers” their high school graduation.

This led to a bizarre rant about psychologists, where Sasse urged students not to pursue psychology in college.

He went on: “There will always be money to be made in psychology. Now that’s a joke… If you’re headed to college, do not major in psychology. That part’s not a joke,” Sasse said.

In a blistering statement, the Nebraska Counseling Association (NCA), called Sasse’s comments “tasteless” and “demeaning” to both mental health professionals as well the students.

“We wonder if you understand the importance of psychologists and the role that mental health plays in America today,” the organization, that comprises of counselors and human development professionals, said.

The NCA also said Sasse’s speech showed an “alarming lack of sensitivity” towards the seniors and “made it seem as though they have nothing to celebrate or be proud of.”

“He does realize that we have a severe shortage of mental professionals in Nebraska, right?,” a Nebraska state senator, Adam Morfeld, said in a series of tweets slamming Sasse’s speech.

Sasse also appeared to take a dig at the students’ fitness, saying that they would be asked to climb a “giant rope” in their lives.

“If you don’t get that joke, talk to your mom and dad,” Sasse said. “Back in the day when we were a lot fitter than you people are, we used to have to climb ropes all the way up to the ceiling of the gym.”

Sasse also managed to include jokes about “murder hornets,” Netflix’s Tiger King documentary, and the name Jeremy, saying, “everybody named Jeremy is the worst.”

His speech drew the ire of Fremont school board member, Michael Petersen, who called on the senator to apologize to the students for his “despicable” speech.

“You deserved better than the graduation remarks from Senator Ben Sasse,” Petersen said in a Facebook post. “The racism, implying that our graduates are fat and lazy, disparaging teachers, and attacking the mental health profession are despicable. You owe the graduating students of Fremont High an apology,” Petersen wrote. 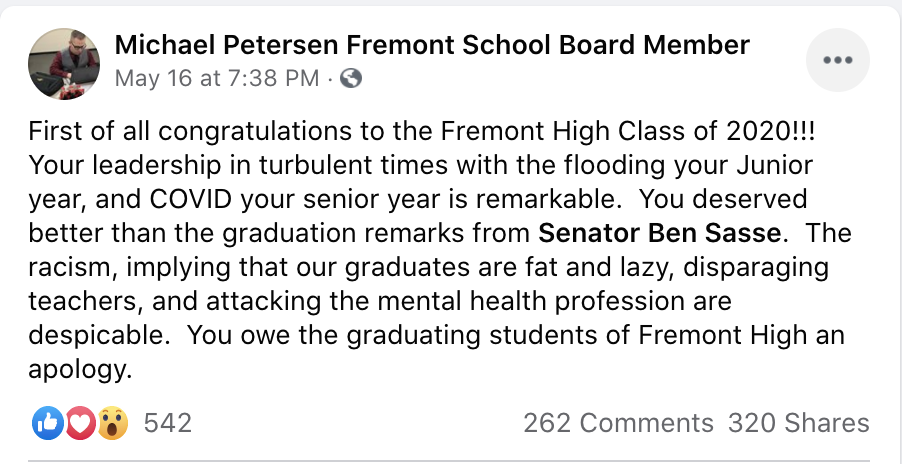 Petersen told the Fremont Tribune that he had sent an email to other school board members to ask for the administrator who gave the green light after reviewing Sasse’s taped speech.

“To me, somebody should have raised a red flag somewhere,” he said. “The fact that nobody did raises a red flag.”

Petersen said that he has asked his fellow board members to issue a public apology to the graduating class.

In a statement responding to the criticism, Fremont Public Schools said that Sasse provided the speech to be included in the online celebration and that the school district “does not edit or censor guest speakers.”

“The words spoken belong to the individual that said them, not the school district,” the statement said. “Including them as part of the ceremony does not endorse the individual, the content of the speech or the interpretations of what was provided.”

The school district asked people who had concerns about the speech to reach out to Sasse directly, saying he was the only one “who can accurately interpret what was intended.”

Sasse’s spokesperson, James Wegmann, accused “politically addicted folks” for complaining about Sasse’s speech and said that it was silly to think that the graduates were “too fragile” to “hear the truth” about China.

In a statement to the Omaha World-Herald, Wegmann said, “Like he said in the video greeting, Ben’s proud of each of the graduates — and he believes their generation is tough enough to help lead us through the bumpy economic times ahead. It’s ridiculous that some politically addicted folks are complaining about Ben calling out China in a joke. He’s said this for months, because it’s true: The Chinese Communist Party’s coronavirus coverup wasted time that could have contained the spread — those lies cost innocent lives in China and around the world. Pretending graduates are too fragile to hear the truth is silly.”

Wegmann did not respond to BuzzFeed News’ request for comment.

Democrat Chris Janicek, who is running against Sasse in the November elections, said in a statement to media outlets, “It’s hard for me to believe that a US senator would make remarks like he did in that speech. Ridiculing mental health care specialists, suggesting that the graduates are lazy slackers and using the platform to blame China for the pandemic we have now is beyond reprehensible.”

Janicek used the online criticism directed at Sasse to get donations for his campaign.

After clips of Sasse’s speech went viral, several people on social media slammed it as “condescending,” “belittling,” and “unfunny.”