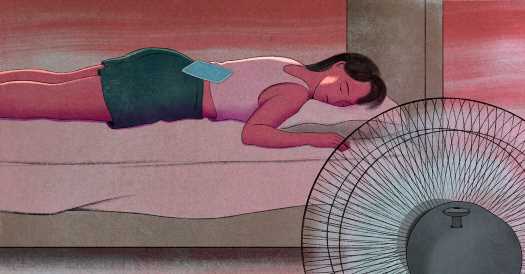 This is what happens to Kristen Ashly during summer: Depression descends like a heavy curtain. She skips picnics, day trips and vacations — the hot, humid days in central Wisconsin make her lethargic, yet also agitated, irritable and unable to sleep. By afternoon, she feels “like a zombie.”

It’s hard to explain the feeling to those around her, said Ms. Ashly, a wrestling journalist and an owner of the women’s wrestling website, Bell To Belles. “People who love summer, they don’t get it. And up here, most people love summer,” she said.

A team of researchers led by the psychiatrist Norman E. Rosenthal first described seasonal affective disorder in the scientific literature in 1984. About 5 percent of adults in the U.S. may experience the most extreme version of the condition, which significantly alters their day-to-day life. More people experience a milder version, the “winter blues.” The shorter days of fall and winter, which can be stingy with their sunlight, are thought to be a trigger.

Often, when Dr. Rosenthal talked about his research, someone would approach him to say that the same thing happened to them — but in the summer. In 1987, he and his colleagues published a report of 12 people who experienced a pattern of seasonal depression between March and October. This and subsequent work suggested that summer SAD presented differently than its winter counterpart, and might have different causes.

“Summer SAD is more of an agitated depression,” said Dr. Rosenthal, a clinical professor of psychiatry at the Georgetown University School of Medicine. While those with winter SAD tend to oversleep and overeat, summer SAD often shows up with insomnia and lowered appetite.

When asked by doctors and researchers, people with summer seasonal affective disorder usually say that what bothers them most is the heat and humidity. Each person’s exact pattern may differ — Ms. Ashly’s symptoms usually start in May and vanish in October — but the disorder returns regularly. Still, even the researchers who study summer SAD said there are other uncertainties around it.

“What causes summer SAD? We assume it’s heat and humidity,” said Kelly Rohan, a psychology professor at the University of Vermont. Studies suggest that some of the same compounds in the body that help regulate mood, such as norepinephrine, serotonin and dopamine, have also been linked to regulating body temperature. “But what is the trigger that makes people vulnerable?” she said.

An added challenge for the people who experience the disorder is the social pressure to feel summery when the sun is shining. People are used to the idea of mental health struggles during the winter, said Blessing Dada, 21, a student at Technological University Dublin in Ireland. Ms. Dada has experienced a deep sadness that comes on each summer, along with insomnia and migraines made worse by heat.

People tell her, “‘It’s summertime, you need to smile a bit more, be more happy,’” she said. “Comments like that are just not helpful.”

A few researchers, using year-round depression data, have questioned the idea that seasonal affective disorder exists at all. In 2016, researchers from Auburn University at Montgomery, in Alabama, reported that major depression was not associated with a seasonal pattern.

Dr. Rohan conducted a similar study in 2009 that evaluated surveys of about 2,000 children and adolescents, and found no seasonal pattern to their mood. That doesn’t mean that SAD doesn’t exist, she said, but that, in an ocean of modern depression, it is difficult to pick out the much smaller seasonal currents.

Those who study these seasonal currents are concerned that summer SAD, and mental health challenges in general, will increase with climate change. A 2018 study in the journal Nature Climate Change found that both suicide rates and social media posts using language signaling lower mood increased as average monthly temperatures rose in the United States and Mexico. The study suggested that as many as 21,000 additional people in these countries could die by suicide by 2050, based on projected temperature increases of 2.5 degrees Celsius in the United States and 2.1 degrees Celsius in Mexico.

Another seasonal challenge that could worsen with climate change — and play into mood — is pollen, said Teodor Postolache, a professor of psychiatry at the University of Maryland School of Medicine. He said the immune response to allergens like pollen might create a cascade of changes in the body, including the release of biological compounds called cytokines that regulate inflammation and have been connected to depression.

When the researchers surveyed about 1,300 Old Order Amish, they found the small group of people who felt at their worst in the summer also tended to report that high-pollen days worsened their mood. Previous work with college students also suggested a link between low summer mood and pollen sensitivity.

While more research is needed to understand how pollen might tie into summer SAD, Dr. Postolache said, “When you feel at your worst relates really well to daylength in the winter” and “to the heat and the pollen for the summer difficulties.”

One difficulty in detecting SAD is its transitory nature. Once fall comes, Ms. Ashly said, “you forget all about it.” Even without seasonal affective disorder, other stresses can trigger depression during summer, like being untethered from the structure of school.

Tonya Ladipo, a licensed clinical social worker and founder of The Ladipo Group in Philadelphia, suggested keeping a mood journal to track your moods and look for patterns. This helped Ms. Ashly and her therapist recognize her cycle of summer SAD. If a low mood doesn’t improve within about two weeks, Ms. Ladipo recommended seeking out a mental health professional — and finding help immediately if you are thinking about harming yourself.

If heat dampens your mood, Dr. Rosenthal said that some of his patients have found that frequent cold showers or baths can help; others experienced some relief by walking early in the morning. Sometimes intense summer light, along with heat and humidity, can be problematic; decreasing exposure with dark glasses or curtains may also be worth trying.

“If those things help, then do them,” Dr. Rosenthal said.

Ms. Ashly said she keeps a small misting fan by her desk, takes chilly showers and runs her wrists under cold water to help her cool off. On particularly hard days, she goes to her parents’ house and works in the basement, she said.

For winter SAD, researchers have found that cognitive behavioral therapy, a form of talk therapy, can help. A clinical trial with 177 adults compared it to light therapy, a well-known SAD treatment, and found that both significantly improved how people felt. Dr. Rohan is considering developing a similar therapy for the summer form of the disorder. She recommended contacting a professional to determine whether what you’re experiencing is related to the season or to another source — and, most importantly, to find ways to help you feel better.

Even if summer’s effect is subtle, it’s worth noticing. “Maybe you can get through your day, but you’re not feeling your best,” Ms. Ladipo said. “That still warrants attention.” Being mindful of the seasons outside and within can help you navigate summer as the Earth continues on its journey, its perspective on the sun a little different each day.

Cameron Walker is a writer in California.