This conversation includes spoilers for the first six episodes of “My Brilliant Friend.”

Growing up in a violent Neapolitan neighborhood, Lila and Lenù weren’t afforded much childhood innocence, but any they had is definitely gone by the end of the sixth episode of HBO’s adaptation of “My Brilliant Friend.” This week’s episodes saw Lenù tormented by puberty and school before heading off for sun and new experiences on the island of Ischia. Lila, meanwhile, is embedding herself deeper into the neighborhood, designing shoes with her brother and juggling the advances of the aggressive Marcello Solara.

This week, Joshua Barone and Aisha Harris, editors on the Culture desk, and Natalie Shutler, an editor on the Styles desk, discuss the fifth and sixth episodes. You can read our discussion of the first two episodes here, the third and fourth here and the Times review of the show here.

AISHA HARRIS It was heartbreaking to see Lila wake up to a stocking at her bedside in Episode 5, and crack a small smile in anticipation — only to find she’s been gifted lumps of coal by Rino. It served as a reminder of how the characters in this story rarely exist for long in a state of pure joy, or merely even contentment, before they are undercut by disappointment or devastation. This recurs moments later, in the same scene, when her father appears to marvel at the pair of shoes Lila and Rino have made, before lashing out furiously at Rino.

It reinforced to me how thorny and precarious the relationships are between these family members at any given moment — so much of how they treat each other hinges on money, and to a point, that is understandable. To both Rino and Lila, the shoes represent the possibility of ascendance for the family business.

NATALIE SHUTLER The shoes are definitely a potent symbol — of Lila and Rino’s ambitions, of Lila’s formidable talents, and of the trade-offs so many of the characters in this series make in trying to do right by both themselves and their families. They are also emblematic of Lila’s persona in the book: One-of-a-kind, sparkling, defiant (at least in how they were created), the shoes attract Marcello Solara and inspire in him a desire for ownership or conquest.

I might be overstating that. But the shoes definitely continue to inspire and haunt Lila, and her protectiveness over them is extreme. If Lila and Rino created them to make their family rich, why not sell to Solara? The implications of the shoes are stronger than their monetary value.

JOSHUA BARONE Lila clearly aspires to a richer future, but only on her terms. Otherwise, she wouldn’t announce “these people don’t impress me” as she and the gang stroll through a fashionable galleria in Naples. This was the first scene that reminded me: The Italy of “My Brilliant Friend” is the same Italy of Federico Fellini’s “La Dolce Vita” and the stylish, era-defining aesthetic it embodied. We never see that in the girls’ neighborhood, which seems like a relic of the more-distant past with humbly sewn clothing — can we talk about poor Lenù’s homemade bathing suit? — and horse-drawn wagons. The postwar boom is alive and well in Naples: clean-cut black outfits, televisions, new cars. But all that is out of reach for Lila; therefore she doesn’t want it.

One more thing about the Naples scene: It was heartening to see the Solaras come to the rescue of Rino and Pasquale as they were nearly beaten to death on the Piazza del Plebiscito. Although the boys are enemies on their own streets, a sense of hometown solidarity united them in this moment. If only the implications of it all weren’t so grim. Lest we forget, when Don Achille handed Lila and Lenù money to replace their lost dolls, he told them to remember who gave it to them. Marcello wants to buy Lila’s love however he can. What better way than by saving her brother’s life?

HARRIS I thought Lenù’s swimwear was fine (I liked the color), if not nearly as stylish as Nino’s sister’s, which is, of course, the point. While watching the trip into the city and later, Lenù’s summer in Ischia, I really understood the implications you mention: Adolescence isn’t just awkward and painful in a physical and romantic sense, but also when you fully begin to realize how much your class status factors into nearly every aspect of life. (If you don’t grow up with money, at least.) For Lenù, it manifests itself in ways both big and small — like when the Sarratore family is surprised to learn that she has continued her schooling and is in fact in the same class as Nino. It says a lot about the expectations of girls at the time, and especially those who are not well off. 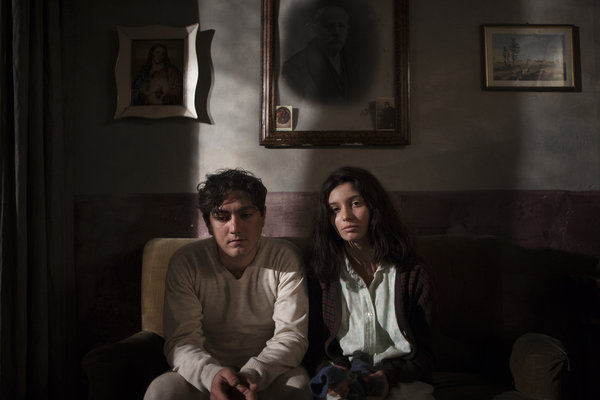 But the physical and romantic aspects are just as palpable. I really appreciate how, throughout the series, strangers and acquaintances, men and women alike greet Lenù or Lila, and usually the second thing out of their mouths after “ciao” is “so pretty!” or some other comment on their appearance. The constant message is that their value as young girls is tied to how they look, at the same time, Lenù, at least, is very self-conscious of her changing body and acne; this really took me back to my time experiencing puberty.

SHUTLER I completely agree. Lenù’s pubescent awkwardness in that bathing suit is palpable, at least at first. And that felt very true to how I remember the books. As a reader, I felt so deeply inside Lenù’s head that I could feel her young female awkwardness and her shame and fears. (Or maybe I was just being vividly reminded of my own!)

BARONE There’s a lot else to unpack in the sixth episode beyond the bathing suit. It was the classic turning point of a Bildungsroman: Having left mainland Italy for the island of Ischia, Lenù begins to truly blossom. Her skin clears, she reads great literature, she falls in love.

Aisha, I’d like to hear what you think of Nino Sarratore, her crush, since you haven’t read the books. On the page, from the rosy perspective of Lenù, he is endlessly attractive: elusive, brilliant, assured. But seeing him onscreen, I felt as though I were looking at him as I would an ex-lover. From the more objective vantage point, those same qualities took on an opposite shade: aloof, haughty, petulant.

HARRIS Indeed, this is my first foray into the world of Ferrante, though I’ve been familiar with her work for some time. Nino reminded me a lot of Timothée Chalamet’s brooding, self-serious intellectual in “Lady Bird,” except nerdy — the exact type of boy a girl like Lenù would be attracted to at this point in her life. I think to some extent his aloofness is what draws her in, and also, of course, his intense interest in learning. I think, because we are adults, we can look at Nino and say “you can do better, girl.” I also wonder if, in translation from page to screen, the director Saverio Costanzo wanted to show him as the adult Lenù now sees him.

SHUTLER The moment when Nino tells Lenù that as a small child he wanted to be engaged to both her and Lila felt so sinister.

BARONE He’s bad news, and it hurts to see how much she loves him. He’s not the only source of her pain in this episode, however. I’m haunted by the single tear that slowly pools on her emotionless face as Nino’s father, Donato, violates her in the middle of the night. What do you both think of how the show navigated this scene, and how Lenù responds to it?

HARRIS That scene shook me, and, not knowing anything about the trajectory of the book series, I could see it coming from a mile away, though the clues weren’t heavy-handed, thankfully. I think the scene was tastefully done — the close cuts between his mouth on hers and his hands on her never linger too much, but last long enough and are intimate enough to feel suffocating and terrifying, as Lenù surely must feel.

SHUTLER It was a horrifying scene, but effective. I was struck and sickened by how distinctly it fit with what was sort of a sub-theme of the episode: methods of conquest. Of course, Donato’s sexual assault of Lenù is different than Marcello Solara’s courting of Lila, but both men trap these young girls in irreversible ways. Lila becomes further ensnared in the violence of her neighborhood, and Lenù’s innocence becomes unwillingly warped and she is forced to harbor a terrible secret.

HARRIS That final shot of her leaving the next morning also provided the only instance where I thought the voice over narration actually added something, or rather a single line. It was a gut punch to hear the adult Lenù say that she had never pleasured herself before that night and, “to feel it in me took me by surprise.”