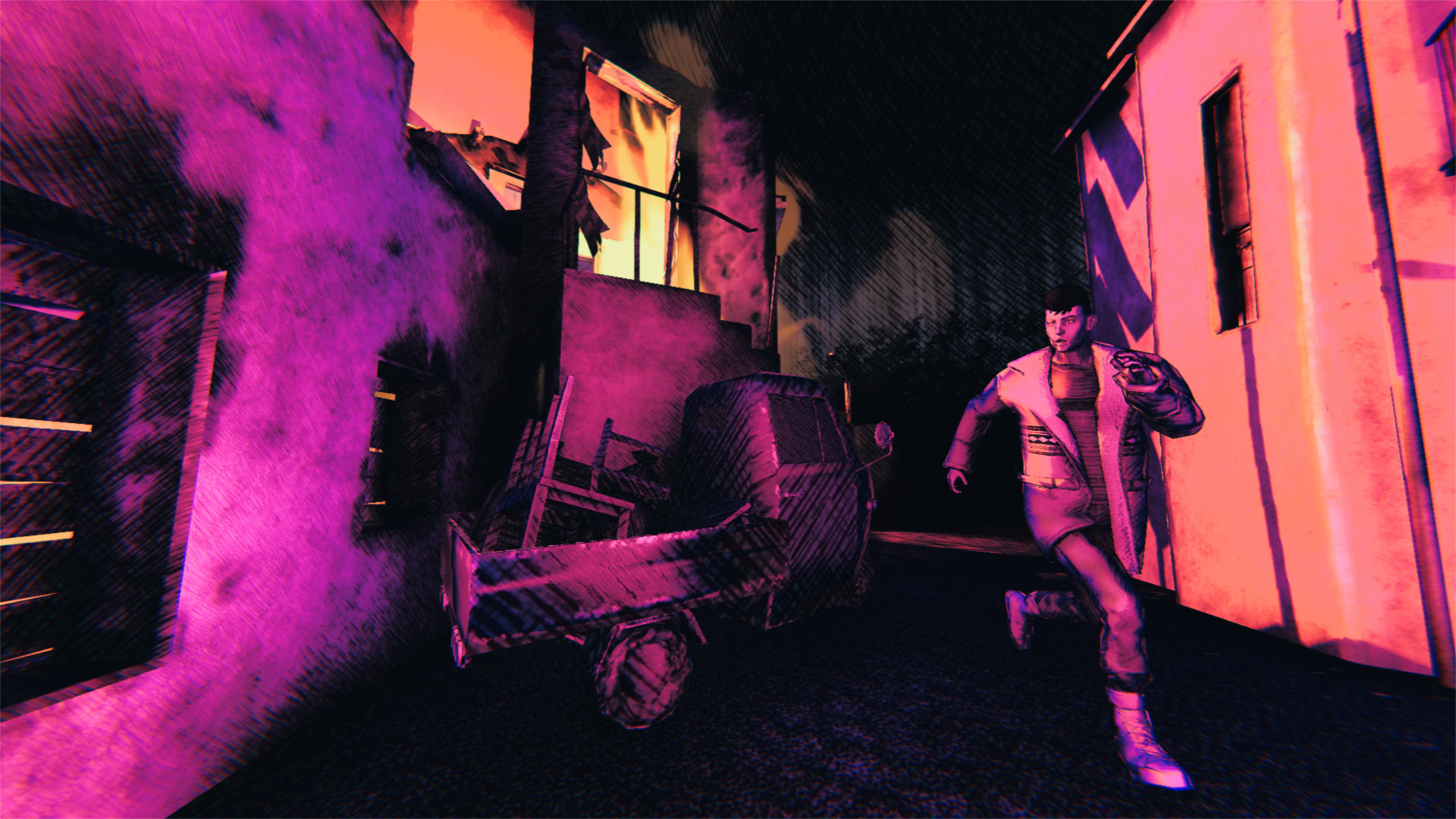 Although we’ll have to wait and see about the hoped-for renaissance of big budget horror games, with the likes of The Callisto Protocol and the myriad of Silent Hill games, this year’s crop of new indie titles is still better than average. The old school Signalis has already proven successful, but Saturnalia is even more ambitious; especially its visuals, which would be remarkable whether it was a horror game or not. That doesn’t necessarily mean it’s a better game, but it is a very interesting one.

Described as a ‘neon-folk horror adventure’ by Milan-based developers Santa Ragione and Big Trouble Game Studio (so another two to add to the list), the game is named after the Roman festival, many traditions from which were incorporated into modern Christmas and New Year celebrations.

Although it’s not so obvious at first, there is much in Saturnalia which harkens back to the first generation of survival horror games, most particularly Silent Hill. It’s certainly not a clone but the story of hidden secrets in an initially ordinary seeming town quickly spiral out of control, although the touristy Sardinian village of Gravoi is a lot more picturesque than a grotty New England town.

The first thing to discuss here, clearly, is the graphics, which are so stylish and exaggerated they’d almost be worth experiencing no matter what the game was like. The hand sketched characters and background details are vaguely reminiscent of A-ha’s famous Take on Me music video, while the garish use of colour takes more influence from giallo horror films from the 70s.

The use of light, mist, and other environmental effects is inspired, while the pitch blackness around you also helps to maintain a short draw distance in a plausible manner. On top of this, characters are animated in a weird stop motion style effect, that underlines the fact that photorealism is not the goal here.

The menacingly minimalist sound design is just as good, as while Saturnalia is obviously low budget the presentation is far more arresting than titles that are a hundred times more expensive to make. The only downside is that the frame rate can’t always keep up with the developer’s intentions, and neither can the rather clunky camera.

The game starts with little explanation for anything that’s going on, as you find yourself being stalked through the maze-like streets by a mysterious creature. At first, you’re given purposefully little help or guidance and quickly find that once all four of the characters you’re controlling die the village layout is never quite the same again, as it’s randomised for the next playthrough.

This is very much a roguelite though, so while death is permeant it’s only the routes between major locations that change, so any shortcuts or new areas you unlock before dying are still retained. What exactly is going on is never clearly explained, since finding out is the whole thrust of the narrative, but each of the characters has their own unique backstory and abilities.

Sergio initially fled the village after his relationship with an older man became public knowledge but has returned to help with his father’s illness. Paul is looking for information on his biological parents, while Anita is pregnant and searching for the child’s father. Everyone is looking for something, with the final character, Claudia, trying to discover the mystery behind the suicide of her aunt.

In terms of gameplay, Claudia is small enough that she can slip through small gaps, Anita has a compass and a map, Paul can use his camera’s flash to stun the monster, and Sergio has a chunky old school satellite phone to communicate with the others. So they’re all clearly distinguished between in terms of personality, backstory, and abilities, despite there not being a word of spoken dialogue.

Since you can only really hope to escape from the monster, with no real way to defend yourself, you’d think you’d constantly feel in peril, with death literally around every corner, but while the game is tense it’s not really very scary. That does depend on your temperament but what saves Saturnalia from feeling like all style and no substance is the connection between the four main characters.

Their backstories and motivations are slowly revealed over the course of the game, as you uncover not just the backstory of the town, but the troubled family relations and feelings of betrayal that link everyone. The uncomfortable weight of tradition and feelings of unfair obligation run through the whole game, in what is a much more complex storytelling experience than it first appears.

You’re very unlikely to uncover every secret when you first complete the game, which encourages replaying it – especially as the game is filled with non-judgemental difficulty options that allows you to concentrate more on the story the second or third time around.

There’s a very purposeful, dreamlike quality to Saturnalia but it’s hard to put a finger on why exactly it’s not scary. Perhaps it’s because the visuals are so distractingly interesting but it’s probably simply because monster encounters are actually quite rare. It’s not a dissimilar set-up to Alien Isolation though and that game could be terrifying – which if nothing else shows how difficult it is to calibrate the atmosphere of a horror game successfully.

As you stumble through the pitch black streets, trying desperately to be as quiet as possible, the sense of survival against the odds, and a final expository revelation, always seem just within reach. Saturnalia itself also feels like it’s constantly on the edge of greatness, but it never quite achieves the sublimation that would have made it a true horror classic.

In Short: One of the most visually interesting video games of the year but also a survival horror that’s not quite scary enough to reach its full potential.

Pros: Amazing visuals, great sound design, and some really good storytelling – despite initial assumptions that the game is being too obscure.

Cons: Not very frightening and the game can often be a bit too secretive about what you’re actually supposed to be doing. Some frame rate problems and a slightly wonky camera.