At this point, if Sarah Paulson isn’t wearing some sort of prosthetic and iconic hairstyle (reminder: she wore four separate wigs to play Marcia Clark in “American Crime Story”), is it really a Sarah Paulson performance?

For her role in the next installment of Ryan Murphy’s anthology series “Impeachment: American Crime Story,” the Emmy-winning star has transformed once again to play Linda Tripp, the whistleblower who exposed former President Bill Clinton’s affair with Monica Lewinsky.

But this time around, Paulson went to extra lengths to portray Tripp, gaining 30 pounds and wearing nearly 5 pounds of padding to accentuate the character’s shape along with a prosthetic nose and teeth.

While her performance seems guaranteed for Emmys attention, early photos of Paulson on set wearing what she later described as “body transformational accoutrements” sparked some backlash online. Critics saw Paulson’s latest transformation as yet another example of Hollywood’s unfortunate history with fat phobia and sidelining plus-sized actors from getting parts.

Speaking with the Los Angeles Times in an interview published this past week, Paulson thoughtfully addressed the dialogue surrounding her casting, saying, “There’s a lot of controversy around actors and fat suits, and I think that controversy is a legitimate one.” 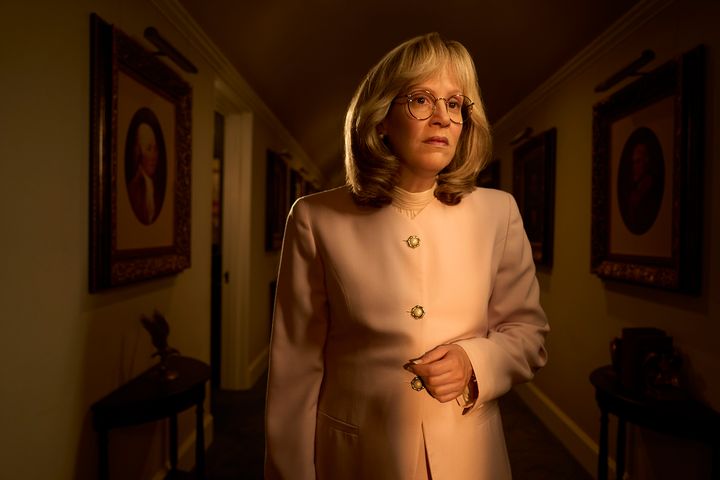 “I think fat phobia is real. I think to pretend otherwise causes further harm. And it is a very important conversation to be had,” she continued. “But that entire responsibility I don’t think falls on the actor for choosing to do something that is arguably — and I’m talking about from the inside out — the challenge of a lifetime.”

She went on to add that casting another actor to play Tripp solely because of a physical resemblance to the real-life figure would be a “real reduction of the offering the actor has to make.”

“I would like to believe that there is something in my being that makes me right to play this part,” Paulson continued. “And that the magic of hair and makeup departments and costumers and cinematographers that has been part of moviemaking, and suspension of belief, since the invention of cinema.”

“Was I supposed to say no [to the part]? This is the question,” she added.

While Paulson addressed the varied nuances of the issue, one outstanding “regret” that has persisted is “not thinking about it more fully” given the entertainment industry’s track record for celebrating certain bodies over others.

“That is an important thing for me to think about and reflect on,” she said. “I also know it’s a privileged place to be sitting and thinking about it and reflecting on it, having already gotten to do it, and having had an opportunity that someone else didn’t have.”

She continued, “You can only learn what you learn when you learn it. Should I have known? Abso-f–king-lutely. But I do now. And I wouldn’t make the same choice going forward.”

Back in 2019, Paulson suggested she wouldn’t be wearing a fat suit for the role, as the series, which was produced by the real-life Monica Lewinsky, attempts to rewrite long-held narratives about women in the public eye.

“I’m going to take about three months off to eat some food, because I’m going to gain some weight to play her,” Paulson said at the New Yorker Festival. “I don’t want to wear a suit because I think it will feel very strange.”

But apparently things changed over the project’s extended production process, which was heavily delayed due to the COVID-19 pandemic.

“Impeachment: American Crime Story” is set to premiere on FX on Sept. 7.