MADRID — Plaza de Colón is a significant place for flamenco fans. The square in Madrid is where the funeral procession for one of the genre’s most celebrated artists, Lola Flores, began in 1995, and it is where many of the city’s major flamenco events take place.

It was also here, in late October, that Rosalía Vila Tobella, 26, showed how she is ripping up the flamenco rule book — or, rather, writing her own version.

At an outdoor performance in front of an audience of 11,000 for the release of her album “El Mal Querer,” the singer appeared onstage wearing sneakers and a rose-red bodysuit embellished with an abundance of ruffles, not the long skirts and heeled shoes that have long been associated with Spain’s folkloric style of music and dance. She was flanked by a dance squad, members of which wheeled out a quad bike for the singer to straddle during one song. Later, the synthetic echo of Auto-Tune, software that adjusts voice pitch, could be heard as she delivered a charged solo: modernity pixelating tradition.

“Everything is in flamenco,” said the singer, who goes by Rosalía, in an interview the next day. “Spirituality, loyalty, humility, valor.” It was “true and powerful,” she added. “I grew up inspired by all these emotions, all these expressive colors.” 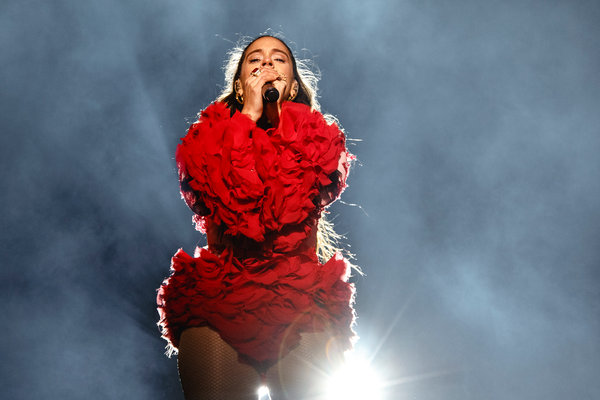 Rosalía’s take on flamenco is credited with refreshing the genre for a new generation. “She is bringing many young people to flamenco,” the journalist Silvia Cruz Lapeña said in a phone interview. Enric Palau, a director of Sónar, a music festival in Barcelona, Spain, said, “She could be the Rihanna of flamenco.”

Rosalía said her new record mixed tradition and innovation in a way that had not been done before in flamenco. “The music is connected with my roots, with my culture, but it’s also connected with the rest of the world,” she said.

Her music videos go heavy on remixed Spanish iconography: matadors flagging down motorbikes, pointy-hooded penitents skateboarding, dancers in streetwear, and shots that echo Goya. Musically, she interlinks flamenco’s complex, finger-clicking rhythms and intense style of singing with electronic styling and intricate layers of playful samples and slogans with attitude. The result is an original pop sound that has been called “millennial flamenco.”

The success of reggaeton from Latin America has already burst open the door for Spanish-language pop music on a global scale, but Rosalía is still something of an anomaly. She is one of the rare contemporary artists in Spain who have made an impact outside of the country, cultivating a fan base on her own via social media. Until August, when she signed with Sony, she had achieved that without the support of a major label.

On the day of its release this month,“El Mal Querer,” which translates roughly as “Bad Loving,” was streamed in Spain more than two million times on Spotify. Rosalía has since been nominated for five awards at the Latin Grammys, which will be announced on Thursday in Las Vegas.

Pedro Almodóvar, the movie director who has cast Rosalía alongside Penélope Cruz in his coming film “Dolor y Gloria,” or “Pain and Glory,” wrote in an email that the flamenco singer had “breathtaking charisma” and praised her “versatility.”

“Rosalía is the complete opposite of an artist designed by the industry,” he said. She is “authentic and original,” and, although she is now working with Sony, “It’s her who decides every single detail.”

“And, up until now, she’s nailed everything,” he added.

Speaking of nails, Rosalía’s are really something: jewel-encrusted and pierced with charms. A day after her album release, between rehearsals for another awards ceremony, she was dressed down in teal sweatpants and a corduroy bomber jacket, except for those sparkling talons. She took them off to play guitar, she said, but they made her feel “powerful” when performing.

“My favorite flamenco singers, they’re not trying to look pretty,” Rosalía said. “They’re trying to put truth in what they do, in the way they express themselves. Sometimes that’s not beauty, but it’s beautiful.”

Rosalía said she discovered flamenco as a teenager while hanging out in souped-up cars with her friends in Sant Esteve Sesrovires, near Barcelona, where she grew up. Back then, she said, flamenco was “a street thing, it wasn’t mainstream.”

In particular, she admired the work of the 1970s flamenco musician Camarón de la Isla, she said. She started dance classes at age 13.

Later, under the tuition of José Miguel Vizcaya, also known as El Chiqui, Rosalía enrolled at the Catalonia College of Music, which admits only one pupil per year to study flamenco. She graduated in 2017, the same year that her first album, “Los Ángeles,” or “The Angels,” was released. That record was a guitar-based vocal album about death, and it included a cover of the American folk musician Bonnie “Prince” Billy’s despairing ballad “I See a Darkness.”

At the time, she said, she felt that she was never going to live up to flamenco’s greats. “I had to push myself to do something original,” she added.

Some flamenco purists are none too thrilled with Rosalía’s taste for experimentation, said Lapeña, the journalist, who has written a book about the genre’s history. “Flamenco is a world where traditions are very respected,” she explained. “There is a part that wants to keep flamenco in the past. There are a lot of codes, some of them old-fashioned, and she’s breaking all of them.”

Rosalía, however, said she believed that the only way to maintain the flamenco sound was by “making it change constantly.” On “El Mal Querer,” a concept album about a relationship turned toxic, she worked with the producer Pablo Díaz-Reixa, also known as El Guincho, to bring in R&B, hip-hop and minimal electronic sounds. One song even riffs on Justin Timberlake’s 2002 hit, “Cry Me a River.”

Rosalía’s melding of influences has also prompted debate about cultural appropriation. In Spain, flamenco is associated with the Romany people of Andalusia, a region in the country’s south. Rosalía, from Catalonia in the northeast, has been accused of appropriating the Romany style and of faking an Andalusian accent.

Lapeña said that some members of the Romany community in Spain felt “a lack of respect, because she only takes the aesthetic part of history — the earrings, the hair.”

“She has a platform to talk about that painful history that is part of flamenco culture and music,” Lapeña added, “but she doesn’t.”

Rosalía’s argument is that she doesn’t see flamenco as belonging only to Romany culture: It comes from other sources, too, she said. “Jewish culture, Spanish culture, African culture, Gypsy culture — this mix made flamenco what it is,” she said, adding that, in her eyes, “This music is not about race or territories.”

Romany people were “very connected” to flamenco, she said, “but flamenco isn’t one thing.”

In any case, Rosalía added, she doesn’t have time to be concerned with criticism anymore. “El Mal Querer” has earned worldwide acclaim and she has caught the eye of producers like Pharrell Williams, who she’s been working with.

She said that even though she was daring with her music, that approach didn’t come from a desire to shock — she just wanted to push flamenco forward.