The choreographer Ronald K. Brown stepped into a big studio at Alvin Ailey American Dance Theater and greeted the dancers with warm hugs. Then, almost without a word, he began to move, his feet and shoulders swaying to the beat, his upper body undulating slightly. “The Love,” a Malian song with a slow, hypnotizing groove, was playing on the sound system. The dancers gathered in a semicircle around him, moving to the rhythm. Just like that, they were drawn into the spirit of the dance.

Mr. Brown was putting the finishing touches on “The Call,” which is to have its premiere on Dec. 4 as part of the Ailey company’s 60th-anniversary season. The dance, which he describes as “a love letter to Ailey,” is his seventh for the troupe in 20 years. So it’s no wonder the vibe in the studio is a bit like a conversation picked up midstream.

“His movement just feels good,” the Ailey dancer Jacqueline Green said of Mr. Brown’s choreographic style, which combines the flow and rhythm of West African movement with an urban drive that suggests club dance. (Mr. Brown also has his own ensemble, Evidence.) “It feels like I could do it at home,” Ms. Green continued. “I could do it when I’m out dancing. It’s almost like social dance. It’s like breathing, a little.”

[Read about “Lazarus,” Rennie Harris’s tribute to Ailey for the 60th anniversary]

With “The Call,” Mr. Brown, 52, said he wanted to pay tribute to the man who had brought him to dance four decades ago. “When I was 8,” he said in an interview, “I went on a school trip to see the Ailey company, and then I went home and made my first dance.” 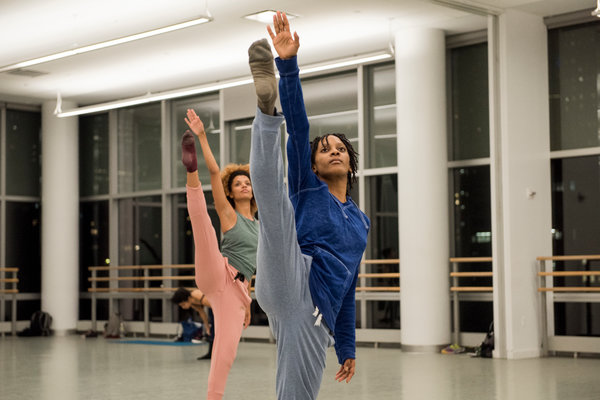 The work Mr. Brown saw was “Revelations,” Ailey’s 1960 masterpiece. It made him realize that he “could choreograph and tell stories,” he said. “I started making up dances using my cousins and putting on shows.”

“The Call” is both intimate and spare; for just five dancers, it’s set to a surprisingly harmonious mix of Bach, jazz (by Mary Lou Williams) and Malian music, as performed by the Brooklyn-based Asase Yaa Entertainment Group. Despite the contrast in musical idioms, each section flows naturally into the next.

It opens with a canon in which one dancer enters after another, each executing the same stately sequence: a jump from the wings; a series of sideways steps with arms extended (as if measuring the space); and, finally, a rising up on tiptoe and turning to gesture to the next dancer, until all five share the stage, their movements echoing across it. Both the music — the slow section of Bach’s Trio Sonata in G — and the movement have a formal, almost classical quality. This, too is a reference to Ailey, Mr. Brown said: “His sensibility could be very formal. And there was something about that clarity of vision and simplicity that I wanted to evoke here.”

The call and response among the dancers eventually leads to an extended duet for a man and a woman, unusual for Mr. Brown. The two dance together again in the second section, set to Mary Lou Williams’s upbeat “Blues for Timme.” Jamar Roberts, who dances with Ms. Green in one of the casts, explained that during the creation process the choreographer had brought in photographs of Ailey dancing with Carmen de Lavallade, one of his earliest collaborators. (Ms. de Lavallade, now nearly 90, is still performing.)

Ailey and Ms. de Lavallade met in high school in Los Angeles. She convinced him to attend classes led by the modern-dance choreographer Lester Horton, whose company they eventually joined together. A few years later, in 1954, they traveled to New York to perform on Broadway in the Truman Capote musical “House of Flowers.” “She brought him too us, in a way,” Mr. Brown said.

Some of the moves captured in those photographs made it into “The Call,” including a pose from Horton’s 1953 dance “Dedication to José Clemente Orozco” in which the two lock elbows. So did a famous pose from a photograph of Ailey by Normand Maxon from the early ’60s — lunging while reaching up toward the heavens — that hangs in the Ailey studios. These are like talismanic elements woven into the fiber of the piece, much like the gestures that recur from one section to the next: pointing, placing a hand on the heart, lifting the forearms toward the body as if splashing water.

“It’s like you’re baptizing yourself with the love for Mr. Ailey and the ancestors,” Mr. Brown explained, “with the intention of really asking Mr. Ailey to join us.” The meaning is what gives shape to the gesture, not the way it looks like or where it falls in the music. “There’s a physical narrative to what they do, which is important, and which they have to be invested in. Because of my long relationship with the dancers, they know that.”

Sincerity of meaning and formal mastery — particularly in the way he moves dancers in and out of sync, on and off the stage — are two constants of Mr. Brown’s choreography. The grounded style challenges the Ailey dancers to tone down their usual onstage magnetism. “We get so used to projecting,” Ms. Green said, “but with him, it’s more personal. We really see each other when we dance his work.”

This is particularly true in “The Call,” with its sense of history and small cast. Unlike most of his works for Ailey, it has no big finale, a detail the company’s director, Robert Battle, recently noted in a telephone interview. “It’s plaintively spoken,” he said, “with no raising of the voice at the end.”

And yet, quietly, Mr. Brown accomplishes a kind of magical sleight of hand. Near the end of “The Call,” the dancers begin to move in sync, slowly gliding backward into a triangular formation. Then, on the final notes of “The Love,” they all raise their arms, at once. And there it is, the opening image from “Revelations.”