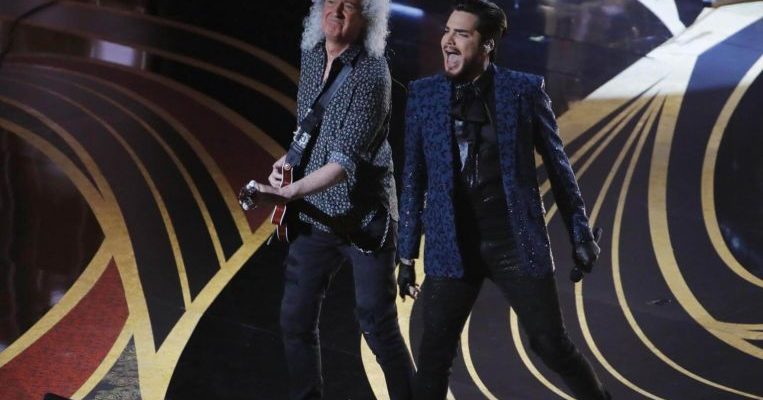 The two active, surviving musicians from Queen’s original lineup – guitarist Brian May and drummer Roger Taylor – joined Lambert, filling in as frontman for the late Freddie Mercury, to play two of the band’s greatest hits: We Will Rock You and We Are The Champions. The familiar guitar and drum riffs brought the star-studded theatre audience out of its chairs, with many of the Hollywood luminaries seen singing along.

Queen and Mercury are the subject of Bohemian Rhapsody, a hit film nominated for best picture and in the running for a total of five categories at this year’s Academy Awards, the 91st edition of the film industry’s highest honours.

Launching the ABC telecast with a live rock band was a virtually unprecedented choice that came about after comedian Kevin Hart, originally picked to host the show, bowed out after a furore over past homophobic material in his standup act and tweets.

Hart’s withdrawal in December left the Oscars without a master of ceremonies for the first time since 1989. That year, the broadcast opened with an 11-minute song-and-dance number, widely derided by critics, featuring Rob Lowe and an actress dressed as Snow White.

In recent years, the opening monologue of the Oscar host has become a platform for gags and jokes lampooning politicians and many of the stars in attendance.

But the Queen performance set the stage for a night that was expected to include a flurry of big musical moments and presentations from such recording luminaries as Bette Midler, Jennifer Hudson, Jennifer Lopez, and record producer Pharrell Williams. Producers of the show, anxious to boost viewership after a record low American TV audience in 2018, also are under pressure to keep the telecast from running over its three-hour designated time slot.

Lambert first appeared with Queen’s May and Taylor in 2009 as a contestant on the hit talent show American Idol when he performed two of the band’s hits on that programme. The trio went on to collaborate occasionally in 2011 and have since toured repeatedly together as Queen + Adam Lambert.