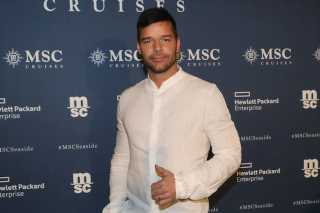 Ricky Martin gave us all of the cute baby feels when he shared an adorable photo of his youngest son, Renn, 13 months, on Instagram. Martin is pretty protective of the four kids he shares with husband Jwan Yosef, so getting a rare glimpse of even one of his children is a big event.

The black-and-white photo shows Renn staring at the camera with big eyes and a sweet — but focused — face. What’s even cuter is seeing that he has the same cleft chin as both Martin and Yosef — like fathers, like son! The photo is such a keeper that Yosef posted the same picture, but in color. You can see that Renn has a head full of ginger hair and expressive brown eyes, and he looks quite handsome in his red shirt and khaki-colored shorts and sandals.

Even though his kids mostly stay out of the spotlight, Martin has been very open about raising a family with Yosef. He told his oldest sons, twins Valentino and Matteo, 12, that he wanted people to understand that gay parents are regular parents just like everyone else. “I want to normalize this,’” Martin explained to Out magazine in 2018. “I want people to look at me and see a family and say, ‘There’s nothing wrong with that.’ It’s part of my mission.”

He also wants to make sure all of his children — all three boys and daughter, Lucia, 2, — feel protected and loved. “My kids ask me about having two daddies and I tell them we are a part of a modern family. This is a beautiful sense of freedom.”

The couple enjoy being fathers so much that they’re even thinking about expanding their family in the future through adoption, although sadly there are some obstacles in the way. “Obviously adoption is an option and it’s very beautiful, but unfortunately for gay men, it’s very difficult to adopt in some countries,” he shared with Out magazine in August.

Like any parent, of course, that desire for a bigger brood depends on the day. He admitted, “There’s moments where I want 10 more, and then there are those mornings where everybody’s crying and I’m like, ‘Okay, maybe we’re fine at six [people in the family].’”

Every mom and dad can relate to that realistic sentiment, but Martin and Yosef love the family they’ve created together. And we can’t get enough of the adorable photos of their kids!

Before you go, click here to see more celebrities with big families.