BOSTON — An American choreographer who made his career in Europe, William Forsythe has a formidable reputation, or several of them. Overseas, he’s long been hailed as a groundbreaking experimentalist, stretching ballet to unprecedented extremes, daringly questioning convention. On these shores, those same qualities have often been greeted, with sneers or shrugs, as showy, shallow, mannered, pretentious.

So it’s a nice surprise that “Playlist (EP),” his first dance for an American ballet company in nearly three decades, is none of those things. It’s rather conservative. And it’s fun. It could even be — dare I say it? — an opportunity for lovers and haters of Mr. Forsythe’s work to find a little rapprochement.

Boston Ballet gave “Playlist (EP)” its debut at the Boston Opera House here on Thursday at the end of “Full on Forsythe,” a program of recent works, all fruits of Mr. Forsythe’s return to ballet after years devoted to other kinds of artistic experimentation. The program and the premiere are plums of a five-year partnership between him and Boston Ballet that began in 2016. 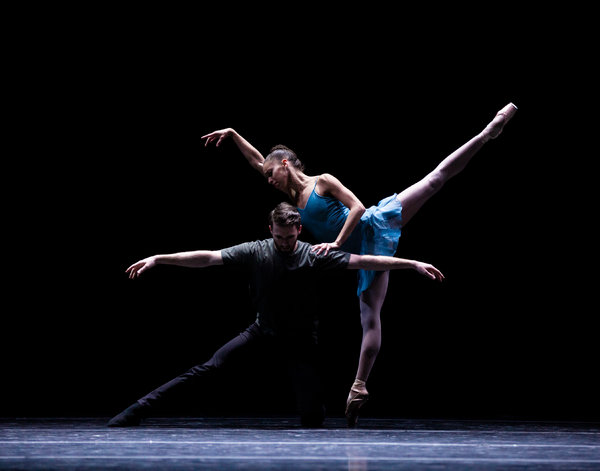 The music for “Playlist (EP)” is both up-to-date and retro. Fresh tracks by Peven Everett, Lion Babe, Abra and Khalid are followed by songs from Mr. Forsythe’s youth: a Barry White chestnut and Natalie Cole’s 1975 hit, “This Will Be (an Everlasting Love).” There’s more than a whiff here of an older artist (Mr. Forsythe is 69) straining to stay hip, hoping to connect with younger dancers, younger audiences and his younger self.

Unlike, say, “The Runaway,” which Kyle Abraham, 41, made for New York City Ballet last year, nothing in Mr. Forsythe’s choreography for “Playlist (EP)” is remotely cool or current. Mr. Abraham combined ballet with hip-hop attitude, hybrid style, confrontational tracks by Kanye West and Jay-Z and a melancholy one by James Blake to be utterly contemporary. The few gestures Mr. Forsythe makes in that direction are tentative, so only mildly embarrassing.

Instead, the choreography is classical, even academic. The solos are like classical variations, displaying the intricacies of traditional ballet technique as if rotating a jewel so all its facets catch the light. And when the stage is filled with rank upon rank of dancers, executing classical steps in unison or counterpoint, it’s easy to imagine that you’re watching a late-19th-century ballet by Marius Petipa and listening to Tchaikovsky.

It’s not Tchaikovsky, of course. It’s not even great pop music or the best of Barry White. Mr. Forsythe totally ignores the Atlanta edge in Abra’s “Vegas” in favor of ballerina prettiness. But he has rediscovered the overlap between Las Vegas and Petipa.

In that rediscovery is a return to roots for Mr. Forsythe. Long ago, he made ballets to pop music, like his 1979 “Love Songs.” Back then, the tone was violent and cynical. “Playlist (EP),” in its blitheness, seems to go back farther, to Mr. Forsythe’s beginnings with the Joffrey Ballet, recalling the split personality of that company in those days: half trashy pop, half ballet nerd.

Ji Young Chae in “Playlist (EP),” the first work Mr. Forsythe has made for an American ballet company in almost three decades.

In the company hierarchy, Ms. Fentroy is a second soloist, and it’s to Mr. Forsythe’s credit that he has given her the spotlight and drawn her out. All through the ranks, he is making Boston Ballet look terrific, from the pristine exactitude of Derek Dunn and the sunny brilliance of Misa Kuranaga, both principals, to the eager verve of Daniel Durrett, a corps member.

That’s true even in “Pas/Parts 2018,” a reworking of a piece he created for Paris Opera Ballet in 1999. Here, the academicism is more dully academic, dense strings of steps with no story in them and little for the imagination to hold on to. The tired disruptions of Thom Willems’s electronic score and the flat-footed pseudo-casual walks meant to turn classroom exercises contemporary feel like worn-out catchphrases.

“Blake Works I,” made for Paris Opera Ballet in 2016, is fresher. Songs from James Blake’s album “The Colour in Anything” give the piece an integrity of tone and feeling, and the ballet steps fit, even if the melancholy tempts Mr. Forsythe into mushiness.

None of these pieces are going to change your life. And programmed in sequence, “Blake Works I” and “Playlist (EP)” exhibit a sameness. One made in Europe, one made here, both are works by an artist in a similar place, emotionally. On Thursday, when Mr. Forsythe came out to bow, he smiled sheepishly and had to be pushed forward. He looked not like a genius or a scourge but like a happy man.

Full on Forsythe
Through March 17 at the Boston Opera House, Boston; bostonballet.org