“What even is Irish dance — is it just, like, ‘Riverdance’?” a smart colleague asked me on Saturday at the New Victory Theater, before a matinee of David Geaney and James Devine’s new family-friendly Irish dance-and-music show, “Velocity.”

Irish dance, of course, is much more than “Riverdance.” But in bringing worldwide attention to a previously provincial dance form, that commercially successful extravaganza (which is still around after more than 20 years) became synonymous with Irish dance for many new to the upright, fleet-footed style. It also spawned innumerable spinoffs, supplying formulas with which Irish dancers and choreographers continue to reckon, whether they know it or not.

At first, the energetic “Velocity,” more intimate history lesson than sequined spectacular, appears to buck cliché. The small cast — just four dancers — limits the well-worn use of Rockettes-inspired unison; Mr. Geaney, a five-time world Irish dance champion, and Mr. Devine, who is said to hold the world record for fastest feet (38 taps per second), are joined by AnneMarie Keaney and Gabriella Wood. The terrific music, played live onstage, leans toward the traditional, with the notable exceptions of some percussive experimentation (by the ecstatic Moisés Mas García) and the turntable scratching of Jack McMahon. 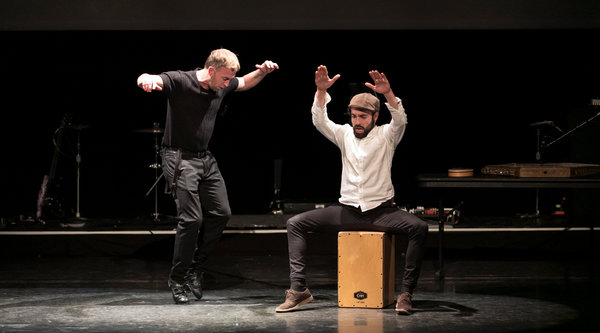 A swift opening duet for Mr. Geaney and Mr. Devine establishes their technical prowess and desire to engage the audience. Within minutes, Saturday’s crowd — largely made up of parents and children — was clapping along to their rhythms.

The next few sections offer a cursory overview of Irish dance’s past. Photo and video projections, paired with choreographed skits, touch upon the older, looser Irish style of sean nós dancing; the tradition of traveling dancing masters skilled in performing on small surfaces; the introduction of strict rules into Irish dance competition; and the proliferation of Irish dance in theaters. Historical accuracy seems less important to the creators than crowd-pleasing tricks, like rising up on the tips of the leather footwear known as hard shoes, a relatively modern move.

A multimedia show for all ages, earnestly tracing the evolution of Irish dance while toying with tradition, would be welcome. And this seems to be where “Velocity” is heading, until it takes a misguided turn into something like an advertisement for its lead dancers — the two men, that is. Their names and accolades blast across the backdrop like a movie trailer, ushering in a solo for each. (Don’t they know we’re already there to see them?) At one point, Mr. Geaney, center-stage, leads a chorus of digital replicas — of himself — projected onto the screen behind him.

There’s no doubting the pair’s excellence as technicians and charm as performers. But this self-celebration rehashes one of the most tired parts of the original “Riverdance” formula: male ego as engine. (Remember Michael Flatley?) In a show that seeks to upend conventions, why not start with that one?

Velocity
Through Nov. 25 at the New Victory Theater, Manhattan; newvictory.org.