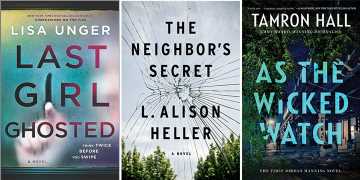 A few mysteries to recommend this month:

Colorado author L. Alison Heller uses a book group as the setting for a complicated story of women and their secrets. At times, “The Neighbor’s Secret” almost reads like an interconnected collection of stories that come together in an Oh-My-God ending.

On a whim, Annie invites the reclusive and very wealthy Lena to join her book group. Lena was widowed years before when her drunken husband killed a young man in a hit-and-run accident. The husband then conveniently died of a heart attack in jail. Lena reluctantly attends the club, only to find she bonds with the women. Lena isn’t totally comfortable with them, however, and there is a sense that she is hiding something from her new friends.

Among them is Jen, who secretly fears that her son is a sociopath. He’s been kicked out of several schools, the last time for stabbing a girl. Now he attends an off-beat religious institution, where he’s tutored by a seemingly innocuous intern. That intern, of course, has a secret.

Even Annie, who appears the most normal, worries that there is some genetic defect that affects Rachel, her eighth-grade daughter. First, Rachel embarrasses the family with her drunken antics at a town festival. Then she becomes obsessed with running. Turns out Rachel isn’t the only one in the family with a secret: Annie’s turns out to be the most surprising of all.

“The Neighbor’s Secret” is a complicated book — you almost need a scorecard to keep the characters straight. Still, it is a first-rate Colorado mystery set around the challenges mothers face.

Adam, who Wren Greenwood meets on a dating website, is handsome, educated, shares her love of Rilke and is after a long-term relationship, not just a hookup. He seems almost too good to be true. You know what that means.

Just as Wren is ready to commit herself to him, Adam ghosts her. He fails to show up for a dinner, disconnects his phone and social media accounts and disappears. It’s certain that he’s not who Wren thought he was. But then, Wren has a number of secrets herself, including that made-up name.

Adam texts her: “Something’s happened. I have to go. I’m sorry.” As Wren tries to face the fact that she’s been dumped, a private eye shows up, claiming Adam is suspected in the disappearance of not one but three other women he met on the dating site. Wren refuses to accept that. It was clear that Adam loved her, and she thinks she catches glimpses of him hovering nearby. Moreover, there are cryptic text messages. As she learns more about the women, and as her own ugly past is exposed, she reluctantly agrees to help the P.I.

As Wren becomes more involved in a dangerous game, she’s not sure who is hunting whom.

“As the Wicked Watch,” by Tamron Hall with T. Shawn Taylor (William Morrow)

Jordan Manning is a beautiful, sophisticated, driven Black television reporter with a cool name. (Sounds a little like talk show host — and the book’s author — Tamron Hall, doesn’t it?)

Jordan covers crime and takes a personal interest when the mutilated body of a young Black girl is found. Police had the girl pegged as a runaway. Black groups protest the lack of police interest. “If the victim had been a white girl …,” Jordan insists.

Jordan gets into the middle of things when she interviews the mother and relatives of the girl, along with a community activist and the police. That leads to her uncovering clues to the murder, and, to no one’s surprise, she finds herself in danger.

Because of the author’s background, there’s a lot of insider stuff about television. (Do TV reporters really do that much texting?)

Subscribe to our weekly newsletter, In The Know, to get entertainment news sent straight to your inbox.