The most dangerous thing a woman can possess is self-worth. Liking her own body, trusting her own instincts, valuing her own time and company, thinking she’s interesting and special, entering business and personal relationships based only on mutual benefit and respect. Sometimes this leads to advertisers having no idea how to corner us. If we don’t hate ourselves, how will we know what to buy? Sometimes self-worth leads to violence against us.

Sometimes, though, self-worth sets us free.

“Shrill” is a show where that happens, and it’s lovely.

Aidy Bryant stars as Annie, a writer in Portland, Ore., who’s stuck — stuck editing calendar listings at an alt-weekly; stuck dating a beardo dingus who treats her shabbily; stuck with the tedious ticker of society constantly running in her mind, telling her she’s bad and gross and lazy and worthless because she is fat.

Annie’s not an apology of a human being, which fat people and women and especially fat women are taught to be, nor does she spend every second of the day in despair. But by the time we meet her, she’s just about at the end of her rope. She’s sharp enough to joke that the man she’s sleeping with, Ryan (Luka Jones), is “like a disrespectful baby, but a man who knows better” — but she makes this joke to his mother, whom she meets in his kitchen, when his mom comes over to make breakfast and drop off his laundry.

“Shrill,” available on Hulu starting Friday, is based on the popular memoir “Shrill: Notes From a Loud Woman” by Lindy West and was adapted for TV by West, Bryant and Alexandra Rushfield. (West is also a contributing opinion writer for The New York Times.) Like “Transparent” and “Better Things,” it has the ring of seeming if not true, than true enough. Emotionally true. 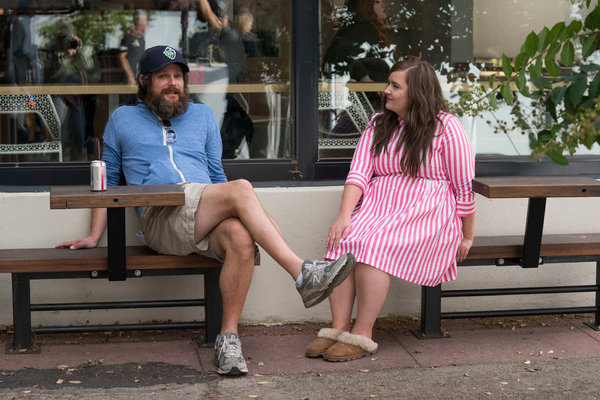 Part of that sense of genuineness comes from the show’s giddy specificity. Annie’s roommate and bestie, Fran (Lolly Adefope), describes Ryan as “a normcore Ted Kaczynski.” (To his face!) Ryan’s current passion project is a podcast about Alcatraz called “Talk’n ‘Traz.” Gabe (John Cameron Mitchell), Annie’s awful boss, brags that he was “the original bass player in Bikini Kill.”

The main reason “Shrill” lands is Bryant’s unfussy performance. She radiates the wounded hopefulness of someone who’s ready for the next chapter of her life, and by the end of the six-episode season, she’s there. In the standout fourth episode, “Pool,” written by Samantha Irby, Annie goes to a body-positive pool party and has a ball. And she has an epiphany. In tears, she laments the “mind prison” she’s starting to recognize and reject, wishing she could have unburdened herself earlier from shame and self-loathing.

“It would have saved me so much time,” she sighs. “And pain.”

Not that “Shrill” is about misery, really. Annie is funny and some of her friends are funny, so there’s plenty of conversational silliness — jokes made for other characters’ benefit and not for the audience’s. Annie’s major foil is her boss Gabe, clearly based on West’s actual former boss at the Seattle alt-weekly The Stranger, Dan Savage. Here he’s rendered as cartoonishly once-hip, a wannabe bully who hassles Annie, claiming all he cares about is her health and health care costs, but who doesn’t even wear a seatbelt. It’s not that what he says isn’t hurtful, but part of figuring out who you want to be is figuring out who you want to listen to.

As Annie is recalibrating, so is everyone else, whether or not she notices, which she mostly doesn’t. Fran wonders if she’s treated women badly in her rambunctious dating life. Annie’s mom (Julia Sweeney) and dad (Daniel Stern) cope with her father’s cancer treatments in different ways, none of which work all that well. A happily married friend admits to fantasizing about the deli guy, and even Ryan is putting forth his own kind of effort, demonstrating that he really is the best person to call if your dog accidentally eats shrooms. Change is incremental but it’s constant, and it’s everywhere.

The thoughtful and companionable humor of “Shrill” belies its subversive manifesto about self-liberation. Annie, after a day of indignities, spots a chic woman crossing the street, gorgeously carefree and on her way to buy a bouquet of flowers. She’s fat and she’s glamorous; she’s fat and fashionable; she’s fat and she sure looks happy.

That could be me, Annie thinks. Not because that would change everything — the world would still be bad. But living a life that doesn’t involve hating yourself, where you actually even loved yourself, despite the cultural pressures and messages — wouldn’t that be better? Imagine.