In just about every version of “Sleeping Beauty,” be it a tale or ballet, the heroine escapes a fatal curse when a good fairy softens the sentence to a mere hundred-year siesta.

This is good news, we assume, as the story skips to the awakening. But if that passed-over century of slumber is anything like “Sleeping Beauty Dreams,” the self-described “progressive fantasy show” that had its debut at the Beacon Theater on Friday, death might have been the true blessing.

The main draw of this ostentatiously dreadful production would seem to be its star dancers: Diana Vishneva, a world-famous ballerina, and Marcelo Gomes, much missed since he left American Ballet Theater. Yet the raison d’être of the show, as conceived and directed by Rem Hass, is not the princess and the prince. It’s the technology around them.

The show does center on Ms. Vishneva. She seldom leaves the stage, except to change costume. Always, she wears a harness, festooned with flickering green lights, that a safety-conscious night jogger might envy. It soon becomes apparent that the outfit is a motion-capture suit, connected to the enormous images filling the screens behind her. 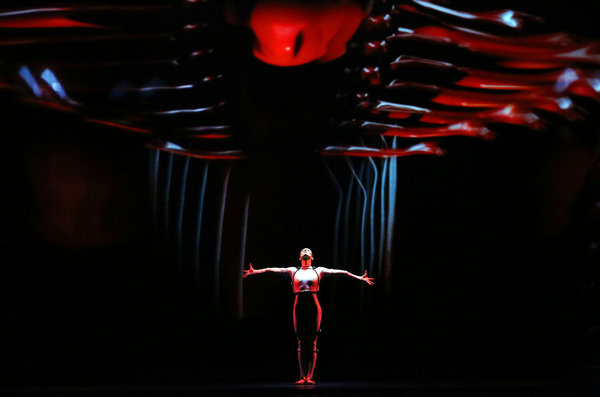 These images are mainly avatars, vaguely humanoid with insectlike touches, always synthetic-looking. Several of the digital figures have many more limbs than Ms. Vishneva does, sort of like the goddess Kali, so that when they match the motion of her arms, the effect is multiplied.

That’s the drift of the projections (visual art by Tobias Gremmler, avatar technology by the production company Fuse): effect after effect, the same operations recurring. The images swirl, ripple, atomize and refract kaleidoscopically. Occasionally, they even acquire an impressive illusion of texture and mass. But then it’s time for the next effect in an ultimately tedious succession.

According to the synopsis in the written program, the avatars are demons in the first act (Fear, Greed) and temptations in the second (including her own fury). The princess is supposed to be battling these interior forces in a quest to discover her true self. That sounds a bit like one of Martha Graham’s psychological dramas, but here there is no psychological insight and almost no drama.

The best that can be said about Thijs de Vlieger’s score (which alternates clichés of Hans Zimmer’s movie style with clichés of electronic dance music) and Edward Clug’s choreography is that they serve the technology. Mr. Clug makes Ms. Vishneva swirl so that her avatars might, and puts her on the floor often so she’s out of the way. This impression of secondary service is reinforced in the second act, when digital technology is temporarily superseded by Bart Hess’s chic costumes, and Ms. Vishneva moves so that her feathers will.

Clearly, this production is a waste of great dancers. Not even the warmth of Mr. Gomes can bring any life to the prince, who arrives three times to support Ms. Vishneva through a limp duet before finally waking her with a kiss entirely devoid of emotional impact.

It’s no surprise that imagery of this scale overwhelms the dancing. But it’s sad to see these artists sacrificed to a fantasy this tawdry and to technology that isn’t even exciting. Apart from Mr. Clug’s choreography for a male ensemble of long-skirted demons, which is at least bad enough to be funny, “Sleeping Beauty Dreams” is a snooze.