The phrase crackles with both a deep visceral charge and an elegant precision. These words are only three among many used by the playwright Aleshea Harris to characterize her truly sui generis, truly remarkable new work, “What to Send Up When It Goes Down,” which opened on Monday at A.R.T./New York Theaters.

In writing about this Movement Theater Company production, which has been created to honor the black lives lost to “racialized violence,” Ms. Harris has also described it as a ritual, a dance party and, above all, “a space in the theater that is unrepentantly for and about black people.”

But it is “anger spittoon” that best captures the paradoxical plainness and poetry, utility and sophistication of what Ms. Harris has created here.

If “What to Send Up” is a receptacle for the rage that is part and parcel of life for many African-Americans, a piece that encourages its audience to respond with cathartic yells and tears, it is also shaped by a rarefied theatrical intelligence. You may not be entirely aware of its artistry until after it’s over, or realize that the show you’ve seen is also a very good play.

The experience begins in the brightly lighted lobby of the Jeffrey and Paula Gural Theater, which has been transformed into a portrait gallery. More than 200 photographs adorn the walls, close-ups of faces with those bright, hopeful smiles with which most people consciously address a camera.

At least some of the names will be familiar to you. They include Tamir Rice, Sandra Bland and Trayvon Martin. Most of them are obscenely young. They are all dead, many of them at the hands of American law enforcement officers.

We are soon reminded that the list embodied by this display keeps growing. We enter the theater, an open space (designed by Yu-Hsuan Chen and lighted by Cha See) and are instructed to assemble in a circle.

On the night I attended, a stately master of ceremonies (the actor Kambi Gathesha) asked us to repeat the name Jemel Roberson — a security guard shot and killed earlier that week by a police officer in suburban Chicago — one time for each of the 26 years he was alive.

That’s one of several exercises in which the audience members are asked, though not required, to participate. We are led in exercises of synchronized breathing, singing and screaming. We are asked to write, if we choose, “kind words” we might want to share “with a black person living in an anti-black society.”

Though I have been writing “we,” and participated in all of the above, I am not properly part of the collective being addressed, celebrated, stirred and consoled here. I am a white man. In his prefatory remarks, Mr. Gathesha makes it clear that while people who are not black are welcome here, this evening is not for them. 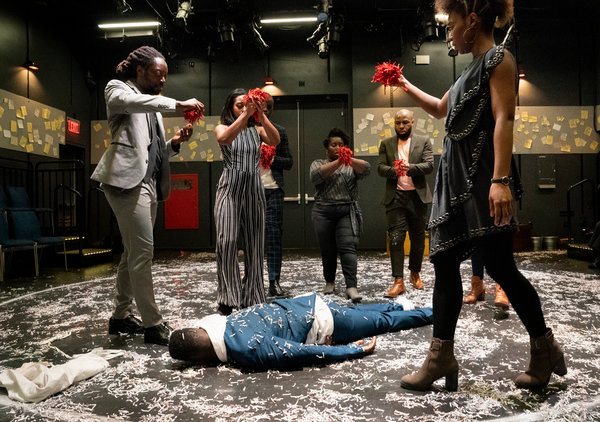 At the same time, “What to Send Up,” which features a protean cast of eight expertly directed by Whitney White, is inevitably, in part, about white people. In what follows the opening “workshop” section, the relationships between white and black Americans are acted out in a series of songs, soliloquies and dialogues. Some are devastatingly funny satires; others are soul-shredding lamentations.

Each is performed as a fugue, with strategic variations in tone and tempo. In one vignette, a woman (Denise Manning) tells a friend (Naomi Lorrain) about a white co-worker who told her that he “doesn’t see color.” The friend hoots in riotous incredulity and asks Ms. Manning’s character how she responded.

Her answer: “I politely leaned forward in my chair … and took his mouth. Off his face. I removed his mouth.” What did it look like? “A little fish flopping around.”

As she demonstrated in her play “Is God Is,” an electric riff on the classic western revenge flick seen at Soho Rep this year, Ms. Harris has a gift for pushing the familiar to surreally logical extremes. Another running sketch, which borrows from and then explodes Jean Genet’s “The Maids,” finds a white woman, Miss (played by a male actor, Ugo Chukwu, in lace gloves and pearls), dealing with her servants.

One of them is an ingratiating man, “afraid of being sucked into the margins,” played by Beau Thom. He is obedient, sycophantic and scared. The other is a woman identified as Made (a priceless Rachel Christopher), a homonym that suits “a woman of her own devising.”

As Miss asks patronizing questions (“in a Southern dialect not unlike Paula Deen’s,” we are told), Made occupies herself with tasks like sharpening a machete. She is especially riled by Miss’s insistently asking her about her children.

She doesn’t have any, Made keeps telling her employer. Only toward the show’s end, in a harrowing monologue in which Ms. Christopher strips the skin off the melodrama-style posing, do we understand why Miss’s question torments her.

A young man (Javon Q. Minter) wanders among and between these plays-within-a-play, wearing a stricken gaze and a fear of attracting attention. That his fate is predetermined doesn’t lessen the impact when he falls to the ground, looking like a corpse in a crime scene photo.

Then there’s the evolving monologue, delivered with exquisite sorrow and contempt by Alana Raquel Bowers, that begins, “Remember when I tried to love you?” The attempt she describes is futile, “like riding a bike without a chain.”

The “you” in this case is white people. If you belong to that race, and the idea of listening to such a declaration makes you squirm, you may want to skip “What to Send Up.” It wasn’t written with you in mind.

But if you’re a lover of theater, looking for signs of fresh and original and in-the-moment life on the American stage, you need to see “What to Send Up.” That’s regardless of skin color.

What to Send Up When It Goes Down