LONDON — “I like it very much,” Verdi wrote of “La Forza del Destino” a few months before his opera was to open. “I don’t know if the public will feel the same, but it is certainly something quite out of the ordinary.”

The public, it turns out, often hasn’t felt the same. Even today, “Forza” struggles for affection more than practically any of Verdi’s mature works. It’s unwieldy and weird, with creaky plot twists and jarring shifts of mood.

Yet when it is taken seriously, staged intelligently, cast carefully, and conducted with energy and polish, it can indeed be something quite out of the ordinary. And at the Royal Opera here, in a production that opened on Thursday, it is fully extraordinary.

The central draw is the starry, comet-rare pairing of the soprano Anna Netrebko, 47, and the tenor Jonas Kaufmann, 49, the major singers of their generation. They have come together in a staged opera only once before: “La Traviata” here in London, 11 years ago.

Since then, both have dived into darker, heavier roles, occasionally overlapping in repertoire but never on the same stage. Until now. And it feels like the meeting of two veterans at the top of their game, their chemistry comfortable and their combined effect galvanizing. 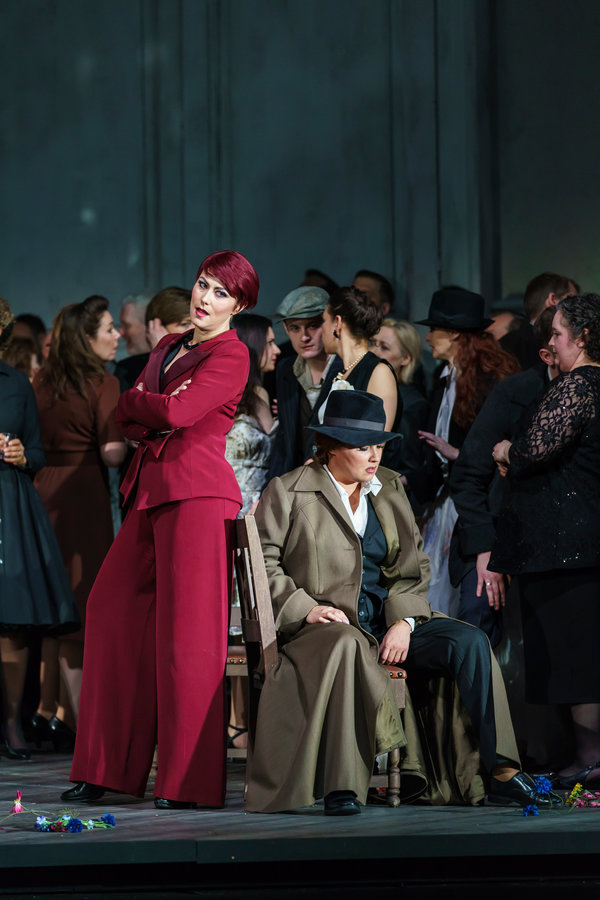 Ms. Netrebko, in particular, gives one of the performances of her career. Singing Leonora for the first time, her voice is startlingly voluptuous and generous in the middle and lower registers. It’s down there where this pitifully persecuted character — violently separated from her lover, who in turn has aroused the eternal ire of her brother by accidentally killing their father — really lives.

Her Leonora sounds death-hounded from the start, while also vibrating with the immense fervor — from love, from faith — that drives her forward. Ms. Netrebko sings with both relish and precision, having clearly internalized the bel canto lessons of earlier Verdi — like the other Leonora, in “Il Trovatore” — but now with an earthier flavor.

Compared with her other recent parts, it is a more spontaneous creation than Ms. Netrebko’s serene Aida or her stilted Tosca, with the grandeur and sorrow of her Adriana Lecouvreur and a febrility that recalls her Lady Macbeth.

Ms. Netrebko’s stage presence has grown more confident in recent years, and, paradoxically, more modest: She’s less busy in her acting, and more meaningful. The singer who might have once boiled over in exaggerated frenzy in “Pace, pace, mio dio” is now as focused in that climactic aria as the slow burn of a candle’s wick.

In her duets with Mr. Kaufmann, his voice’s duskiness unsettles into stormy passion. His sound shadowy and haunted, with tears at its core, he is adept at playing outsiders like Don Alvaro, but occasionally he can seem muted on stage, merely grumpy. While the exciting bit of strain and hint of wear in his tone can conjure thoughts of Mario del Monaco, Mr. Kaufmann doesn’t go for del Monaco-type Italianate recklessness; sometimes he seems too obviously to be pacing himself.

But he gets Alvaro’s wounded dignity and wariness, and he feeds off other singers, whether Ms. Netrebko or the robust baritone Ludovic Tézier. As Leonora’s brother, Mr. Tézier shows both Don Carlo’s implacability and the utter exhaustion of a life spent in single-minded pursuit of vengeance. He sings “Urna fatale” with the sustained patience and intensity that define the character.

Antonio Pappano, the Royal Opera’s music director, isn’t one to force vigor out of extremes of fast and slow, loud and soft. Nothing in the score rushes, and nothing lags: You’re simply aware of the action moving forward at a pace that feels natural — propelled but never harassed.

There are details that shine: I’m thinking, for one, of the shivery frost of strings as Padre Guardiano leads Leonora to the cross in the second act. But listening to Mr. Pappano and his committed orchestra is less about piecing together the moments than appreciating the flow. And to have that effect of a unified vision in “Forza,” notorious for its disjointedness, is an achievement, indeed.

The company could have sold out this run with its luxurious stars alone, but it recognized that this work, as much as any in opera, needs to be solid throughout its cast. Ferruccio Furlanetto is a booming, sensitive Padre Guardiano, a moral anchor in a world of restlessness and rootlessness. Alessandro Corbelli is a piquant Fra Melitone, and smaller parts are gifts from two still-vital old hands, Robert Lloyd and Roberta Alexander.

Veronica Simeoni is an agile voice and presence as Preziosilla, the eerie energizing spirit of the opera’s battle encampment scenes. Christof Loy, the director of this more or less modern-dress production, which first played in 2017 in Amsterdam, renders her a kind of demon in a society driven half-mad by war.

The comic and tragic are in this staging cut from the same abrasive cloth, with crowd scenes that quickly turn threatening and characters who lurk moodily on the edges. Carnival-like sequences take on genuine mania and menace.

Mr. Loy’s work here is sensible and intelligent; he treats “Forza” not as caricature but as fodder for clear, specific drama. He appreciates opera’s extroversion, its heightening of reality, but never abandons subtlety. It’s an ultimately straightforward approach that gives the work’s delirious strangeness its due while insisting “Forza” can be appreciated earnestly.

The production is not exactly staged on a single set, but there is nevertheless the sense, as there should be, that these characters have never managed really to escape the room in which their troubles began. The killing of Leonora and Carlo’s father also periodically returns as fragments of a black-and-white film projected on the wall, its style reminiscent of Italian neorealist cinema.