In 2011, HBO began a series based on a set of books whose legion of fans had exacting expectations. “Game of Thrones” required condensing a vast narrative, visualizing wonders like dragons’ flight and creating a world that spanned continents.

HBO’s new series “My Brilliant Friend,” based on the wildly popular Neapolitan novels of Elena Ferrante, is a different but no smaller challenge. The story of a febrile and rivalrous friendship between two girls in a working-class Italian neighborhood in the 1950s, it is as intimate as “Game of Thrones” is sweeping.

The first season, which begins Sunday, is set largely in a single cluster of apartments. Its drama, though punctuated by violence, is interior and inwardly focused. It enfolds warring families and shifting alliances, but in a setting where everyone is packed close and prying eyes and whispers are inescapable.

It is a game of courtyards, stairwells and balconies. But as earthbound as it is, “My Brilliant Friend” is no less transporting.

For readers of the books, it is probably enough to know that the first season, which corresponds to the first of the four novels, sticks close to the source material. For newcomers, that is the story of Elena Greco, called Lenù, and Rafaella Cerullo, called Lila. They form an ardent bond their first year of school, in a dusty, low-rise neighborhood on the outskirts of Naples.

Lenù (played by Elisa Del Genio as a girl, Margherita Mazzucco as a teenager) is studious and reserved, a people pleaser. Lila (Ludovica Nasti and Gaia Girace) is prodigiously smart, with a fierce charisma and a prophet’s coal-eyed intensity. They’re two bright girls in a community that doesn’t know what to do with bright girls.

As they get older, their lives diverge. Lenù’s parents keep her in school (an expense her mother resents). Lila, a shoe repairman’s daughter, drops out to work but devours books and teaches herself Latin and Greek, mastering effortlessly what Lenù strains to achieve.

“My Brilliant Friend” is constantly conscious of how money and small gradations of privilege change lives. When you’re poor, aspiration can become a burden, something that makes your parents angry. If you have a gift, like Lila does, you must use it as a tool, to free yourself. “To escape this neighborhood,” she announces, “you need money.” 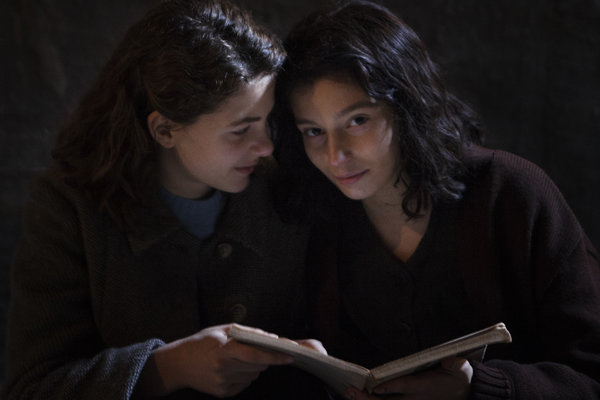 An international coproductiondirected by the Italian filmmaker Saverio Costanzo, “My Brilliant Friend” is scripted in Italian, which makes its cloistered world all the more immersive. The grimy neighborhood — part of a vast complex of original sets — reproduces physically what Ferrante’s prose communicated, the claustrophobia of the setting and the relationships. (The adjective “close” can mean either “dear” or “suffocating.” In “My Brilliant Friend,” it always means both.)

Just beyond the four-story apartments, trains pass and cars speed on the highway, but no one here is going anywhere. Sunlight and air are things to be found elsewhere, or inside books. When Lenù spends a few weeks on a nearby resort island, or the girls and their friends take a disastrous outing to a wealthy part of Naples, they may as well have stepped onto another planet.

The poverty left behind by the war still looms, as does resentment toward the few families who got wealthy off the fascist-era black market and now rule like tiny royal houses. The girls know Don Achille (Antonio Pennarella), the town’s thuggish kingpin, as a real-life boogeyman; later, Marcello and Michele Solara (Elvis Esposito and Alessio Gallo), arrogant rich bros who cruise girls, sharklike, in their shiny car, become a more familiar menace.

Ferrante is credited as a writer on the series, and like her novels, the adaptation has a sharp sense of time and place without nostalgia or sentimentality. Costanzo’s attention to period detail helps; it can feel as if you’re watching a lost postwar Italian film about postwar Italy.

You see the world expand through the eyes of two girls — days of dullness, punctuated by men beating each other in the street and women raging out windows. A scene imagines the town’s quiet anger, in Lenù’s fantasy, as a swarm of insects that teem from the sewers at night, “making our mothers as angry as starving dogs.”

All four actresses in the pivotal roles are astounding. Nasti and Girace convey Lila’s spooky genius maturing into volatility. Del Genio and Mazzucco have the less showy but equally complex role: Lenù is insightful, yet her emotions are enigmatic even to herself.

In the few places “My Brilliant Friend” stumbles, it is from an excess of faithfulness to the source. The series keeps the framing device — an older Lenù sets out to write the story after getting a call that Lila has gone missing — and therefore the narration, which in the novel helped sketch the complicated inner life of the reserved Lenù.

But it would often be better to let the direction and the remarkable performances show us what we’re being told. The voice-over can end up competing with them, as when the teenage Lenù goes to Naples with her father and sees the sea for the first time. We can see the awe and sense of possibility on her face; we don’t need to hear it as well.

Overall, though, it’s no small thing how well and how often “My Brilliant Friend” finds TV correlatives for the luminous art of Ferrante, the series’s unseen star.

Ferrante is not listed as the creator (there is no creator credit on the series), but “My Brilliant Friend” still stands out in an HBO drama-series lineup that has been dominated by turbulent men.

As the story of “My Brilliant Friend” expands, it takes on elements of more testosterone-driven cable dramas: men raging against their circumstances, family rivalries coming to bloodshed, boys courting girls passionately and menacingly. But this time it’s from the fully inhabited perspective of two young women who, in past versions of these tales, would be supporting players, or objects, or victims.

That feels quietly revolutionary. And it’s a counterpoint to cable-drama history as “The Sopranos” creeps up on its 20th anniversary in January. Lenù and Lila, as it happens, are growing up not far from the part of the boot where Tony’s people came from. But their terrifying and wondrous Naples is far, far removed from his New Jersey, in ways you can’t measure on a map.

My Brilliant Friend
Sunday on HBO