If you want to see how an orchestra can give a fresh polish to dusty old Mozart, head to Lincoln Center.

There you’ll find a surprisingly novel Mozart program — played by the New York Philharmonic on Wednesday night under Manfred Honeck and continuing through Tuesday — that, like a fugue, tells a story of the composer’s final year while mapping a journey of death and transcendence.

Unlike Schubert, whose later works have an autumnal mood colored by sickness and melancholy, Mozart didn’t begin the year 1791 knowing that, months after his 35th birthday, he would fall ill and die soon after, on Dec. 5. So you would be hard-pressed to find a sense of farewell in his music from that time.

In fact, for most of the year Mozart was as stylistically nimble and prolific as ever. He presented the premieres of not one, but two operas, “La Clemenza di Tito” and “Die Zauberflöte.” And, in what would be his final public appearance as a pianist, he gave the first performance of his Piano Concerto No. 27 in B flat, which the Philharmonic opened its program with on Wednesday, featuring Richard Goode.

This gently dignified piece, with childlike simplicity and few extremes, all but dares its soloist to achieve majesty at a whisper, to only suggest virtuosity. Mr. Goode, an elder statesman of Mozart’s music, was calmly authoritative, gliding through quick runs and playing with restrained lyricism. Even his galloping rhythms had an unpretentious lightness, more like a pony than a Clydesdale.

He didn’t perform an encore, which only heightened the contrast between the rosy concerto, a triumph of early 1791, and what followed after intermission: the Requiem, left unfinished at Mozart’s death. 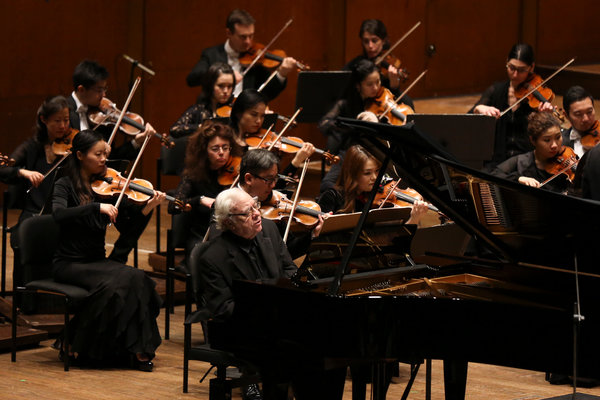 Mr. Honeck, who as the Pittsburgh Symphony Orchestra’s music director has repeatedly found original ways to present the Requiem there, opted this week for a programmatic medley: “Masonic Funeral Music,” the Requiem and “Ave Verum Corpus,” played without pause for a loose narrative about, as one of the texts says, “a foretaste of heaven in death’s agony.”

“Masonic Funeral Music” is the program’s exception, the one work not from 1791. (It was written in 1785.) But listen closely and you’ll hear eerie similarities with the Requiem. Like that piece, its orchestration calls for basset horns and leans heavily on the lower strings, setting a richly somber tone that conjures an organ-like timbre. Mozart never meant for it to be an overture for the Requiem, but on Wednesday the juxtaposition was seamless.

And this move — adding a prologue to the Requiem, with an epilogue on the way — was hardly as unusual as Mr. Honeck’s presentation of the Requiem itself. After Mozart’s death, the work was completed by his pupil Franz Xaver Süssmayr, whose edition was long the standard for orchestras around the world.

The problem often is that it’s all too easy to tell where Mozart’s sophistication ends and Süssmayr’s well-intended inferiority begins. Mr. Honeck’s solution is to cut the final sections and present the Requiem as Mozart left it — almost.

His version begins with the seven completed sections, followed by the Lacrimosa and Offertorium composed by Mozart but finished by Süssmayr. Then it ends with the Lacrimosa — though now as only Mozart’s fragment, the last eight measures of music he ever wrote. Further complicating things, Mr. Honeck, according to the Philharmonic, also has his own changes to the Süssmayr orchestrations.

I may be overstating this Requiem’s complexity. In the concert hall, it was natural and succinct, never losing steam as the work often does. And the Westminster Symphonic Choir was stirring in the choral passages, with stabbing staccatos in the Dies Irae and glorious radiance in the Rex Tremendae. The four soloists each had distinctive qualities — standouts were the tenor Ben Bliss, who brought the dramatic textures you might hear in his Mozart over at the Metropolitan Opera, and Megan Mikailovna Samarin, making her Philharmonic debut with a penetrating mezzo-soprano — yet they blended with impressive grace.

Mr. Honeck could have let the concert evaporate into mysterious quiet with the Lacrimosa; but, by ending with “Ave Verum Corpus,” the famously spiritual conductor seemed to be making a statement. If the Requiem is a plea for eternal rest, then this brief work, played on Wednesday with a soft glow, promises that and more: serene transcendence.