And though this outer borough hominid isn’t 20 feet tall like the one currently terrorizing Broadway, he does (we are told) “play Ping-Pong with his ding-dong.”

That’s a ditty you’re simply not going to hear in the musical. Indeed, Lisa Clair’s play “The Making of King Kong,” which opened on Sunday at the Doxsee in Sunset Park, is basically the bizarro-world inverse of that $35 million extravaganza. For one thing, it cost $35,000 to produce.

But imagination comes at many price points, and Ms. Clair, a recent graduate of Brooklyn College’s playwriting program, isn’t interested in spectacle for its own sake. Her jungle (designed by Caitlin Ayer) consists of some potted plants and green lights (by Samuel Chan). Instead of a whole ape, she makes do with just a few fingers of one furry hand — big enough for the heroine to nestle in comfortably.

Some of her other ideas aren’t as comfortable, and that’s really the point of this satirical if scattershot take on the tale. All of the gender and racial ickiness of the 1933 film — defused or simply erased in the Broadway retelling — is here brought to the fore.

To achieve that, Ms. Clair pulls a narrative switch. At first, she focuses on the actual Hollywood story the title suggests: How the directors Merian C. Cooper and Ernest B. Schoedsack, along with their star, Fay Wray, created the monster classic. On the RKO lot during preproduction, as a narrator (Kevin R. Free) sets the scene, Cooper (Ean Sheehy) and Schoedsack (Hanlon Smith-Dorsey) shape the movie’s scenario and Wray (Molly Pope) aces her screen test.

But soon enough these fact-based characters blur into their fictional “King Kong” counterparts. Cooper becomes the director Carl Denham, Schoedsack his sidekick Jack Driscoll, Wray the actress Ann Darrow. By the time they get to Skull Island, it’s unclear whether we’re in the inner or outer story, an effect enhanced by the clever video and media design of David Pym. 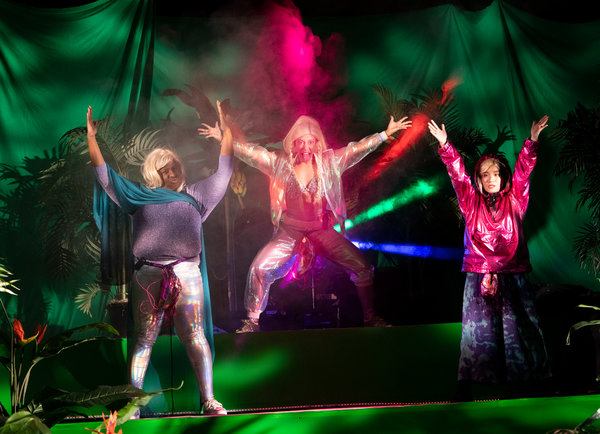 Still, it’s plain enough who is enjoying the adroit lovemaking skills of Kong. That would be Wray, amply demonstrating what made her a Scream Queen of Hollywood.

Ms. Pope, a cabaret artist with a fine comic sensibility, does a terrific job of keeping the satire afloat. She gives just the right spin to winking lines that put modern lingo into a ’30s mouth. (“My gender presentation is sensitive-rageful,” she says, introducing herself, “and my preferred pronouns are silence and distance.”) Her mockery, deeply sincere, allows the character to comment on gender and racial stereotypes while indulging them for comedy.

“The Making of King Kong” lacks that tonal control. The Skull Island natives turn out to be a trio of “White Yoga Ladies” practicing their Mountain Pose while chanting about quinoa. (They are played by women of color.) Schoedsack is a poet who hates women yet falls in love with Wray and may also be in the closet. Cooper is a soigné racist in seersucker.

The result is a bit of an ideological free-for-all, with no clear upshot. Ms. Clair certainly raises the relevant issues but then seems uncertain how to corral them. In light of the virulent racism central to the film’s cosmology, making Kong’s lover so willing and white doesn’t do much to detox the trope.

Still, I found it moving when the production, directed by Eugene Ma, pulled another switch at the end. I hope it’s no spoiler to report that the narrator, Mr. Free, stepped out of the frame to deliver a peroration asking us to stop repeating old stories that are “no longer useful.”

I don’t know if that was a dig at the Broadway musical, but it certainly was bracing at the Doxsee, home to Target Margin Theater. After all, Target Margin, which hosted “The Making of King Kong,” sometimes spends whole seasons repeating (if reframing) old stories. Recent subjects have included Chekhov, O’Neill and “The Thousand and One Nights.”

If the key word in Mr. Free’s plea is “useful,” perhaps we can agree that Chekhov and the other classics fit the bill. So do cheap, scrappy new shows like “The Making of King Kong,” which let us ask — even a thousand times, if necessary — whether there is any point in laboring so hard to rescue artifacts of the worst human ideas.

The Making of King Kong